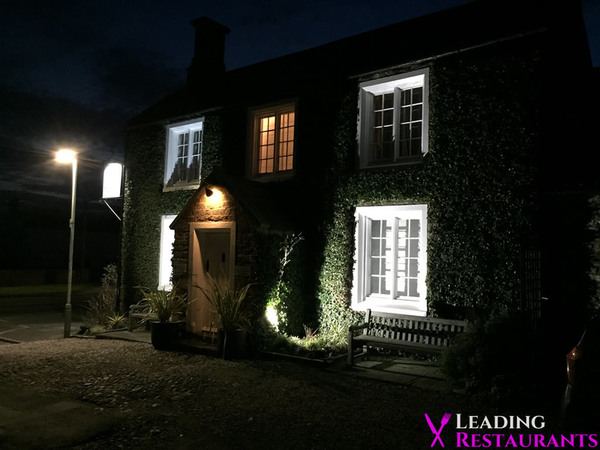 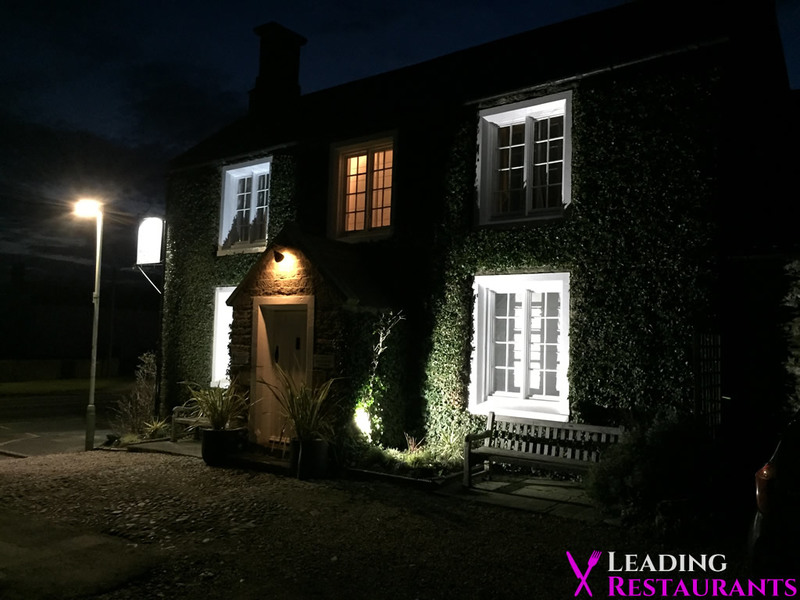 After purchasing a local boozer with his parents in 2009, former golf pro and self-taught chef James Close has gone on to build something very special indeed at the Raby Hunt. The award of a second star from our favourite tyre munching inspectors in 2016 catapulted the restaurant, in the small village of Summerhouse near Darlington, to national recognition. The other major guides have been perhaps slightly less enthused in that time, but I was nonetheless expecting a high quality meal as I visited with my wife for dinner on a mild Friday in February to celebrate our anniversary.

They have a few bedrooms on site which I'm sure are lovely, but my wife and I opted to stay near Darlington and drive across for the evening (my wife doesn't drink, very handy). I had read parking might be an issue, and indeed various press pieces about long running disputes with the local village residents, but we were able to park on Summerhouse Back Lane (about two minutes from the restaurant) without any issue at all. Externally, the place looks like a lovely country inn, however the internals are very different. Entering past a glass door which overlooks the chefs table and kitchen, we were greeted by grey walls (so much grey), some glass voids in the floor and the signature skulls on display in various places; with the (grey) blinds down for evening service the place felt a lot more like a night club than a country dining room. There's a bit of a trendy vibe I suppose so sure that decor works for a lot of guests; it didn't work for me. The only part of the place which felt like a pub were the toilets; they could do with a bit of sprucing up.

The welcome on arrival was friendly and warm enough but at least three of the staff asked if we were looking forward to the meal (i.e. clearly a scripted question) which I found weirdly unnatural. We were sat on a table in the far corner of the restaurant (at right angles to each other) which I was initially unsure of, but actually it wasn't a bad spot to see how the restaurant operates. We never saw a drinks menu but I opted for a G&T to start which was nice enough. The non-alcoholic selection seemed pretty non-existent when my wife enquired, but they do have some homemade lemon cordial which was pleasant, if not spectacular. What I didn't realise at the time is that G&T had cost me £15 (yep, fifteen pounds) and a glass of cordial £6; but don't worry, I've got plenty more to say on the pricing here later.

There's just one tasting menu split into three sections, 'Global', 'Signature' and 'Pastry' and I opted for the matching wine flight also, although there's a comprehensive wine list if you prefer. Our copy of the menu included a hand written message from James Close wishing us a happy anniversary; a small touch but one that was much appreciated. Dinner began with a delicate little pomme souffle bite and then three courses in fairly quick succession; a lovely slice of raw scallop, an enjoyable crab taco and a little chunk of delicious pork in a soft wrap, three very tasty little bites which we both enjoyed.

Next up was tuna nigiri sushi which was nice enough but served without cutlery; I noticed a table across from us had to ask for some to aid the eating. Weirdly, the next course of langoustine tempura came with chopsticks, but was easier to pick up. Either way, it was delicious. The last course of this little group of three was a wagyu sando, which to all intents and purposes was a little cubed beef sandwich. I did have a bit of an issue with this dish, not least because of the mildly pretentious build up. First, following the previous course we were presented with a little bit of card explaining what the dish was, before it was delivered in a sealed wooden box. What that basically says to me is that they don't feel the dish is good enough to just deliver on a plate. I'm inclined to agree, although it was a pleasant little bite.

I'd been told my initial glass of wine had to last the first three courses, I'd assumed the same for the second glass of wine but it turns out it was supposed to last for the next artichoke dish too, although in fairness they did provide a little free top up. The artichoke dish in question was a nice piece of work; given it's required to be eaten instantly due to the combination of hot and cold elements, the explanation from our waitress came before the dish arrived instead of after. I wouldn't say it was incredible flavour wise, but it was a very clever technical dish, and I appreciated the imagination.

Our waiter then told us we were now entering the 'Signature' section of the menu (how exciting) and I'd now generously receive one glass of wine per course. First up were the razor clams, which have been on the menu for many years. It was a delicious plate, I honestly couldn't fault it. The beef tartare with caviar (served in a little tin) which came next however wasn't quite as stellar; it was a nice dish but I've had far better tartare dishes at restaurants of a similar level so I found that one mildly disappointing. It was however followed (after a bit of a wait) by a very tasty little pastrami burger which was a lovely bit of work.

I have to say though, the winter salad that came next was probably the best salad I've ever eaten, an absolutely outstanding plate. To mark the occasion, we were presented with another little card which listed out the dozens of ingredients in the dish. "Are all those ingredients in the salad?" I asked our waitress, "Erm, most of them" was the response. I could see the fear in her eyes as she wondered if I was going to follow up and ask which ones, but don't worry, I didn't. I'm a nice person. But if you are going to provide a card like that, you should at least highlight which ingredients are actually in the dish, otherwise it's a bit of a pointless exercise.

Next up was... a wait. The pacing had been reasonably solid up to this point although it was painfully apparent they were trying to sync up various tables around us who'd arrived at different times, never an easy task. But as I sat looking at my glass of red for the next course, the wait was very noticeable. When it did eventually arrive, the Herdwick lamb (prefixed by a separate little kuzu bite) was another very tasty plate of food that I thoroughly enjoyed.

Desserts were also impressive in the main; the first was listed on the menu as 'black olive and sheep's yoghurt' when in reality the principle flavour of the dish was chocolate (why not just say that then); it was a tasty dish but not particularly memorable. The mango and yuzu tart that followed however was a beautiful plate and tasted delicious; a dessert fit for any menu. The final course was really a glorified selection of petit fours and we were indeed asked if we'd like anything to go with it (e.g. a coffee, which I ordered). I always prefer the feeling that you're getting something delicious "free" with coffee, rather than it being a set part of the menu, but you can't have everything I guess. That said, I don't wish to be too disparaging as they were pretty stunning as p4's go, a lovely choux bun with chocolaty cream, a so-so macaron and the zingy flavours of the signature chocolate skull completed our meal.

Service throughout was OK; we were served by a variety of different waiters and waitresses who were all pleasant enough. I did find the wine flight a bit disappointing in truth but the wines were all poured at the table and the explanations confidently delivered, so that was a plus. After paying the bill we were left to our own devices to depart, but there was no one by the entrance to give us our jackets so we had to remove these ourselves; yet another little lacking touch unfortunately from the experience.

But I suppose my biggest gripe with the Raby Hunt is the approach to pricing. When I booked a few months earlier, the tasting menu price was £115 which I would have been pretty comfortable with. By the time we ate, it had risen by an inflation-busting amount to £140. Just to put that in context, that's more than Moor Hall and it's more than Sat Bains, two restaurants north of London that I would say offer better service, wine and importantly, food. Just my opinion of course, but worth noting the major food guides agree also.

Now look, I fully appreciate any restaurant can charge whatever the hell they like to customers (and they can change the menu price when you're five minutes from arriving if they want to) but with the hiked up menu price, the disappointing wine flight and the quite frankly ridiculous drink prices, the overall cost of the meal really felt too much to me and a bit of a mick take to be honest. At least the included service charge was 10% rather than 12.5% though, thank goodness for small mercies.

Despite the lack of value, I have no problem proclaiming there's undoubtedly some outstanding cooking on display here, but given all those other issues, I really don't have the urge to head back anytime soon. As the old adage goes, you can't please all of the people all of the time, and although I'm sure the restaurant will continue to attract many happy customers in future, it's just not a place for me.

None really, but it's got a trendy nightclub vibe, so I'd recommend a shirt for dinner.

There's plenty of street parking a short walk away in the village.

I'm comfortable with the two stars here. I think if the AA did award rosettes here (they won't due to any place with bedrooms requiring membership of an AA accreditation scheme), they'd probably plump for four. The Good Food Guide are therefore slightly harsh in my opinion.
Group size: 2 adults. Total bill (including service): £480.
View full restaurant details for Raby Hunt
« House of Tides review
The Black Swan at Oldstead review »