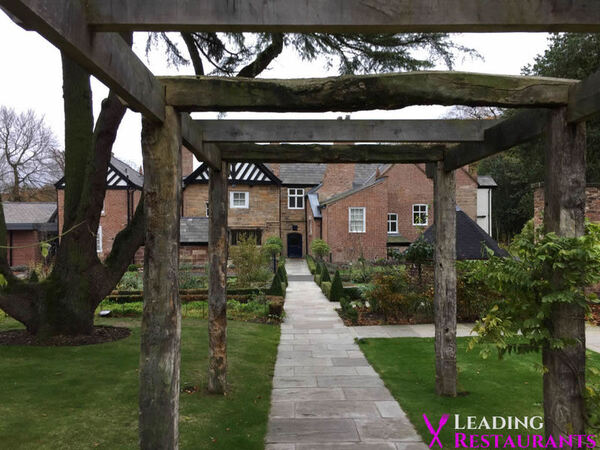 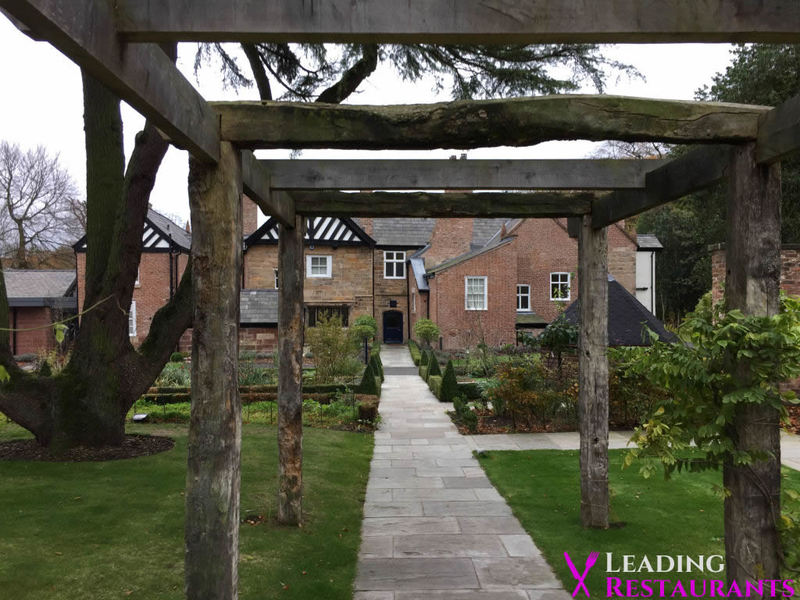 It had been a mere eight months since my last visit to Moor Hall but the major food guides have been pretty busy continuing the bestowment of accolades in that time. In September, The Good Food Guide declared Moor Hall the eleventh best restaurant in the country and not only that, The AA Guide awarded a fifth rosette, their highest possible honour.

But of course, the award I'm sure they were most delighted to receive was that precious second star from our favourite tyre munching inspectors, which duly arrived in early October. Fortunately, I'd already booked a return visit for lunch by then to celebrate my mum's (sixty-fifth, but don't tell her) birthday, and so I duly arrived on a drizzly November Saturday with a genuine curiosity to see what, if anything, had changed since my last visit.

The grounds are still lovely and there's still plenty of parking on site; the various vegetables and herbs in the garden seem to be growing just fine too. We were welcomed warmly on arrival and shown to the lounge to peruse the menus and the still-very-impressive wine list. The full eight course menu is available at lunch which is what we opted for (a shorter menu is available). I'd let the restaurant know well in advance that my mum is vegetarian and coeliac and this was no issue; the printed menu she received reflected this fully which was a nice touch.

One thing that hasn't changed is the little nibbles to start in the lounge; some cheesy puffed crackers and a little charcuterie plate. One thing I did find slightly lazy was that the crackers were given to my mum as the vegetarian option and the meat to me (where as last time I was served both), but I have to say that was the only time during the whole afternoon I felt she hadn't really been catered for. I again wasn't asked for my wine selection in the lounge as previously, but I did hear the waiter tell another table the wine order would be taken later in the dining room, so at least they're making people aware of this now (it's quite unusual in my experience not to select the wine flight at the same time you select the menu). I had my usual G&T to start; the non-alcoholic selection still isn't extensive but my mum preferred to stick with water for the afternoon anyway.

We were then shown through to the dining room; still the lovely modern space I remembered with floor to ceiling windows overlooking the grounds. The first notable change in service was that Alex the sommelier (a real highlight from my first visit) arrived before any of the food to take our wine order; I think this works much better timing wise compared to previously where all the snack courses were delivered before he appeared. In truth, he didn't seem quite as happy and exuberant as last time, although he was still perfectly pleasant. As previously, I opted for the wine flight which I had no doubt would be top notch again, Alex knows his stuff.

Three of the four little snack courses to begin with were the same as previously, not that I minded; they were all pretty scrumptious. First up was a lovely little black pudding parcel and it was nice to see my mum given a completely different vegetarian option here. The smoked eel in a delicate potato basket was equally delicious, and this was followed by langoustine (previously sea trout) with radish and purslane which again I really enjoyed. Last of the snack courses was a little oyster with buttermilk, a delightfully fresh tasting dish I thought. Next up came the bread, served with some lovely herb and cultured butter. Whilst my bread was without fault, my mum's gluten free bread was unfortunately pretty poor. It's never easy to make good gluten free bread, but this was overly dense and not very flavoursome, a bit of a shame in truth, but you can't have everything.

First of the proper courses was baked carrots with sea buckthorn and a sprinkling of Doddington cheese, personally delivered by one of the chefs (I would say a slightly happier looking chef than my last visit). I'm still a big fan of this dish and my mum loved it too; it's difficult to envisage a better carrot-based dish being served anywhere in the UK. The turnip with crab and beef tartare dishes that followed were both accomplished pieces of work, but the meal stepped up a notch with the next scallop dish, a stunning effort. I really enjoyed this last time but think it's got even better; the cooking of the scallop was absolute perfection and worked beautifully with the accompanying cauliflower.

It was around this time the nice onion roll appeared again and this time my mum's gluten free version was considerably tastier than the bread she'd received earlier, which was good to see. The next dish of turbot was another stunner, much better than the monkfish dish I'd eaten previously. However, the biggest difference of the entire meal versus my previous visit came for the next course. Whereas back in March a dish of fallow deer fell rather flat, this time the roast Goosnargh duck with beetroot and kale was a winner, a lovely main course, fully fit for what was turning out to be a stunning menu.

Unfortunately, great though the main course was, when it was delivered there was no explanation at all from our either waitress as to what it was, they just put the plates down and left. I think because my mum had a different dish, each waitress was expecting the other to deliver the explanation, but in the end neither did. I don't think I've ever experienced that at a restaurant of this level before, far from the end of the world, but not the level of service I'd expected.

That brought the savoury courses to an end and we were offered cheese which we decided to take before dessert (I missed out on this last time). We asked for one plate to share, note that they won't actually give you a single portion if you do this, instead they have a special "cheese to share" option which isn't apparent until you receive the bill; mildly misleading I would say given what we asked for. The famed cheese room is actually not quite as impressive as you might have thought; it's basically a chilled box just off the dining room and fitting any more than three people in there would be a real struggle. That said, the waitress was excellent with taking us through the options and the cheese we ended up with was delicious, matched nicely for me with a glass of tawny port. The accompanying bread and crackers (including good gluten free options for my mum) with chutney and little beetroot blocks, were suitably tasty also.

After a very nice ginger ice cream crossover, my mum was presented with a little extra dessert for her birthday, a sort of candyfloss on ice cream affair, as well as a little printed birthday card. It's a small thing but I think it makes such a difference to the experience (it's a wonder to me that some restaurants completely refuse to recognise special occasions), my mum really appreciated it. First of the desserts proper was a dish of wild blackberries and muscovado; it was a very tasty little bowl and significantly better than the forced rhubarb and milk jam dish I'd had a few months earlier. Last up was the now famed Worcester Pearmain apple dessert; I loved this last time, I actually think it's got even better, as good as you could possibly hope for from an apple based dessert I think.

The desserts were a great end to what was some stunning food, the menu really has come on since my last visit and it's fantastic to see many of the weaker dishes replaced with far more accomplished ones; you can't ask for more than that. The wine pairings were excellent again also; the only mildly disappointing thing was that while Alex served my first two wine pairings (and incidentally my port for the cheese course), the rest of the time we were served by another sommelier. He was a charming fellow too who knew his stuff I'm sure, and of course, I've been to many other top restaurants and not been personally dealt with by the head sommelier. But, when you've had the Alex experience once for the entire meal, you kind of feel slightly let down when you don't get it again!

We took coffee at the table to finish and another notable improvement this time was some additional petit fours; as well as a tiny chocolate tart (with a gluten free alternative for my mum), we enjoyed a little meringue and slice of salted caramel fudge also. They've still got quite a long way to go to match the p4 offerings of other leading restaurants, but at least progress is being made.

After a bit of a wait (genuinely can't remember the last time this wasn't the case in any restaurant), I was able to collect the bill and call time on what was truly a fantastic meal. It's difficult to fault Moor Hall really; the food has improved even further since my last visit and the service is still excellent (bar a couple of little slips). Although there's certainly a little bit of room for improvement, I feel it's well on the way to being recognised as one of the best restaurants in the country.

None officially, but I'd recommend something reasonably smart. I went with jeans, a shirt and shoes.

I think all the guides have this spot on. You could potentially make a case for a 9 from The Good Food Guide and I feel that may come next year if the improvements continue.
Group size: 2 adults. Total bill (including service): £395.
View full restaurant details for Moor Hall
« The White Swan review
Adam Reid at The French review »