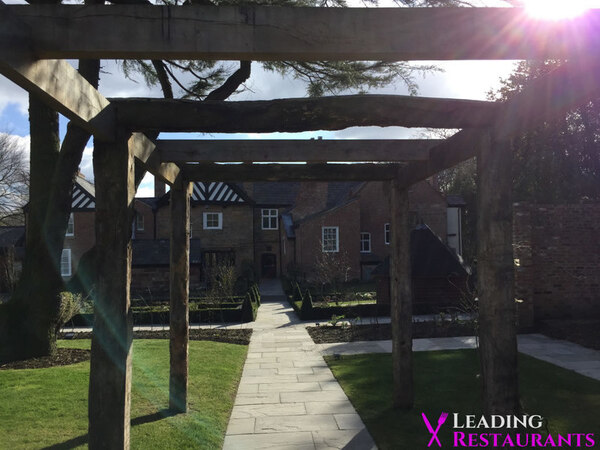 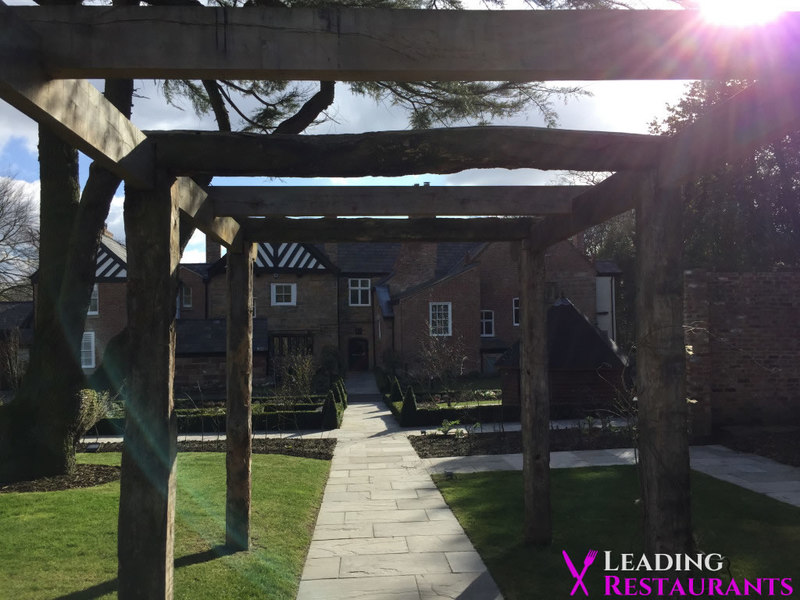 Having recently celebrated its first birthday, it's fair to say Moor Hall has had a pretty auspicious start to life as a fine dining destination. A seemingly endless stream of gushingly positive reviews have flowed consistently since launch, and all the major food guides have given equally favourable stamps of approval, including a precious star from our favourite tyre munching inspectors. Not that anyone really had any doubt this restaurant would do very well, with ex L'Enclume stalwart Mark Birchall at the helm. I was therefore fairly certain an excellent meal would await as I visited with my wife for lunch on a cold but sunny March Saturday to celebrate our anniversary.

On arriving at the venue, it's clear a great deal of time (and money) has gone into both the buildings and grounds, and it's a great setting. Walking from the ample car park through the kitchen garden to the main restaurant building (a more informal barn restaurant is also available next door) reminded me, in the nicest possible way, of a well manicured National Trust venue. The welcome on arrival was warm enough and we were shown to the rather splendid lounge overlooking the lake to enjoy an aperitif and some canapes whilst perusing the menus. I had a perfectly drinkable G&T as always; my wife's request for a non-alcoholic cocktail seemed to fall on deaf ears which was a shame, but they do offer Seedlip which made for a nice alcohol-free G&T for her which she enjoyed.

The canapes were nice albeit quite unspectacular; cured meat and cheese crackers effectively, not a great deal more I can say on those. There are three menus on offer at lunch; a three, five and eight course tasting menu; naturally we opted for the eight courses. The wine list is impressive with a substantial selection from countries perhaps not as well known for their vineyards; there's plenty of the aforementioned wines available by the glass also. I suppose the first slightly unusual bit of service was apparent here; although we were given the wine list to look through, we were told our choice would be taken later on which seemed rather strange to me. I can't recall a restaurant in recent memory where I haven't selected the wine flight at the same time as selecting my tasting menu choice.

The time came for us to make our way through to the dining room; it's an impressive modern space with floor to ceiling glass giving a lovely view of the grounds in the winter sun. It didn't take long for the nibbles to arrive; little black pudding parcels were delicious and the delicate smoked eel basket was another enjoyable little bite. By this point there'd still been no mention of wine so, partly I admit due to my wife being utterly convinced they'd forgotten to ask me, I mentioned to the waiter no one had made any reference to wine since I was given the list quite some time ago. He was perfectly pleasant in his explanation that the sommelier would be over after the initial nibble courses, but may well have thought inside that I was a raging alcoholic. I really did find is quite unusual to be given a wine list (and then have it taken away again) so far in advance of actually choosing any wine, but maybe it's a new trend that I've previously missed.

After a pleasant little sea trout dish, Alex the sommelier duly arrived and one little bit of service I did like was that as he was speaking when our very tasty final mini course of oyster with buttermilk arrived, he gave the explanation of the food rather than the waiter, a class touch I thought. As I often do, I opted for the wine flight; I was fairly certain Alex would match the wines to the food better than I could.

After some enjoyable bread with two types of equally enjoyable butter, the first proper course of baked carrots arrived. A chef arrived shortly after to sprinkle on some cheese snow; he didn't look especially pleased to be there but it does make the moment slightly more memorable I guess. Either way, it was delicious, one of the best carrot dishes I can recall eating. Next up was a slightly less memorable (although still very tasty) turnip and crab dish in a deep rich broth, followed by the much famed beef tartare. It's a dish that made its way from Mark Birchall's L'Enclume menu to several other Simon Rogan restaurants in varying forms; I've had these variations a number of times and never been completely sold in all honesty. This version was good although I did find the mustard slightly overpowering (hey, what can I say, I have a delicate palette). My wife loved it though.

One thing we did agree on though was that the next scallop dish was another absolutely delicious plate; I've been fortunate to eat some great scallop dishes in my time and although I wouldn't say this was the best, it was certainly up there. A pleasant creamy monkfish dish followed and it was around this time an onion roll appeared which was scrumptious also; it really felt like the menu was building nicely to what I hoped would be a stunning meat course. Fallow deer with beetroot and kale it said on the menu; "great" I thought, I absolutely love venison when delivered well. It duly arrived but unfortunately, despite my heighted anticipation, I found the dish really flat. It was perfectly edible but really didn't pack any kind of punching flavours I'd hoped for, a real disappointment as this should be "the" course on a tasting menu where you're pulling out all the stops. And my wife very much agreed this time.

Things picked up again with a deliciously gingery ice cream crossover, followed by an edible if unspectacular bowl of rhubarb and milk. The final course consisting of apple terrine and sorbet however was another delicious plate, really impressive flavours and a great way to round off an enjoyable meal.

Service throughout was excellent from all the staff; the aforementioned sommelier was superb and a pleasure to talk to, as well as delivering some interesting but excellent wine pairings (poured at the table too as I much prefer). Water was kept suitably topped up and the menu pacing was spot on as well, something many restaurants (even those at a similar level) often struggle with.

However, despite the excellent service, the restaurant for me does lack that little something. Perhaps that was best demonstrated by the rather miserable singular salted chocolate tart petit four we were served with coffee. Tasty though it was, when compared to the offerings at other top restaurants, it was a rather unenthusiastic attempt. Despite them knowing we were there for our anniversary, there was no mention of this during our visit (let alone an anniversary plate) and no offer of a kitchen tour; apparently this is available if you ask, but that's hardly the point.

I suppose I'd sum it up by saying on the whole (despite some unexpected shortcomings with the food) this is an excellent restaurant, but those parts needed for me to walk away feeling I'd been delivered a truly great experience (and boy, do I love that feeling) sadly weren't there. I'm perfectly willing to accept that maybe my expectations were a bit high and maybe I've just been a bit spoilt before at other leading restaurants. Nonetheless, you can't argue with the overall standard of food and service here and I've no doubt Moor Hall will continue to pull in a great many happy customers for the foreseeable future.

Smart casual is the order of the day; I went with an open shirt and jeans which seemed about right for lunch.

There's plenty of parking on site; allow time to have a walk around the grounds. Make use of the sommelier; some really interesting wines are on offer.

I think all the guides have this about right. I've read a bit of general clamour in places to award two stars; for me it's not there yet but at the same time, it wouldn't surprise me to see a move to two stars in the next couple of years.
Group size: 2 adults. Total bill (including service): £359.
View full restaurant details for Moor Hall
« The Samuel Fox Country Inn review
Freemasons at Wiswell review »