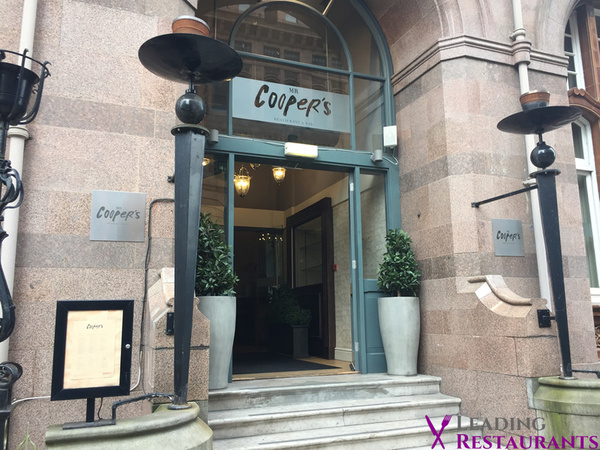 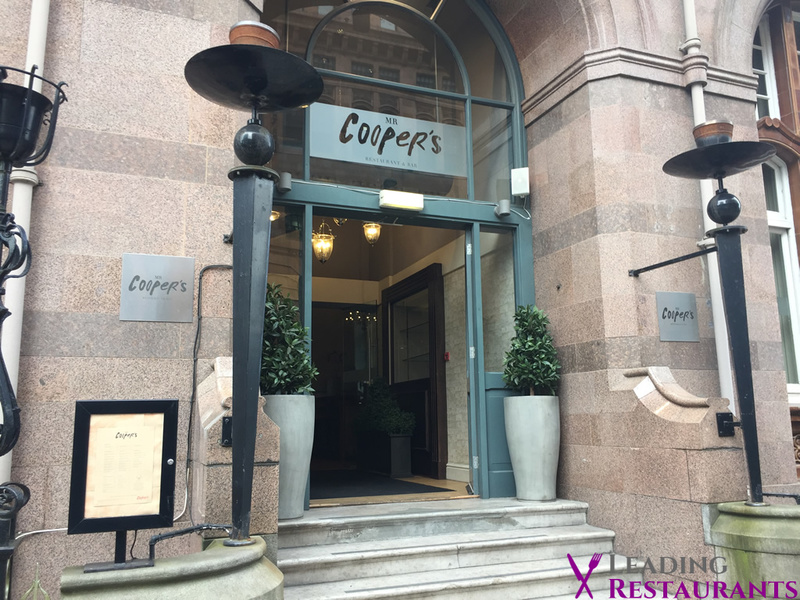 It had been over four and a half years since my last rather disappointing visit to Mr Cooper's. A great meal it was not, but a lot has changed since then. Simon Rogan stepped away from the Midland Hotel in late 2016 (ending his involvement with sister restaurant The French too of course) but the restaurant has continued to successfully retain its two AA rosettes (awarded not long after the restaurant opened), no mean feat.

With a new head chef (Rebecca Richardson) in place and a recently relaunched menu, I was reasonably expectant of a decent meal as I visited for dinner with a friend on a horribly humid Monday evening in June. The restaurant has its own entrance on Mount Street although strangely, if you enter that way (rather than through the main hotel) there's no one to greet you on arrival. We were a little early for our reservation so had a quick drink in the bar area first; we let the lady behind the bar know we had a table booked but as our reservation time came and went, we still had to head to the entrance on the hotel side to find someone to show us to our table. It was a bit of an unnecessarily convoluted process in truth.

Our table was under the central tree; the dining room is similar to how I remembered with plenty of vegetation still on show, but there's good spacing between the tables and overall, I'd say the room has a nice, modern feel. There's a good value pre-theatre menu available but it had to be the full carte for us, which seemed perfectly reasonably priced as well for a smart city centre restaurant. There's a comprehensive drinks menu too, with a range of cocktails and a good selection of wine by the glass. Our waiter returned about two minutes after delivering the menu to take the food order (maybe we looked like we were in a rush) without first asking if we'd like a drink, but he was fortunately happy to give us a few more minutes to order.

Dinner began for me with the pork belly, complete with a fairly sharp (but not too sharp) celeriac coleslaw. The pork itself was lovely but the accompanying black pudding ball was a bit lacking in punch for me. The two crispy (I assume pork) sticks on top of the dish were absolute teeth breakers; they definitely should have come with a voucher for a free dental appointment the next day. I enjoyed the dish overall, but there were some noticeable errors which was a shame. My friend had no complaints regarding his scallops however.

For my main, I opted for the lamb rump. On the whole, it was a pretty delicious plate. The cooking of the lamp was excellent and the accompanying minted peas, albeit they're not exactly a revolutionary addition, were very tasty too. Sometimes you just can't beat a tried and tested flavour combination. The only disappointment on the dish was an under-seasoned (and slightly undercooked if I'm honest) butternut squash fondant. My friend had the beef cheek and was equally enthused.

We asked for dessert menus which unfortunately took a long time to arrive for some reason, but we were eventually able to order a final course. I opted for the intriguingly named "allotment", a suitably fitting dessert I thought for the garden themed dining room. I was slightly fearful this would be a classic case of style over substance, but I've got to say I really, really enjoyed this dessert and it was the highlight of the meal for me. Atop some chocolate soil sat marzipan baby carrots and mini toffee apples, as well as a dollop of well balanced strawberry sorbet. But the highlight of the dish for me was the chocolate and cherry mousse encased in a delicate chocolate cube, simply delicious. My friend's caramel tart with vanilla ice cream was a little bit less interesting to look at, but still very tasty.

And so, a surprisingly enjoyable meal came to an end. I genuinely wasn't expecting the food to be as good as it was; granted there's not too much revolutionary here, but there was some really good cooking on show and I would happily devour all three of my courses again. Service was a little bit hit and miss and a tad disjointed but no real complaints, and I thought the meal was pretty decent value too all things considered. Overall, I had a really enjoyable evening and I'd happily venture back at any point in future.

None I could see.

I'm happy enough with the two AA rosettes and I also think it's worthy of an entry in both the Michelin and Good Food Guide too.
Group size: 2 adults. Total bill (including service): £106
View full restaurant details for Mr Cooper's
« Alderley Edge Hotel review
The Black Bull review »