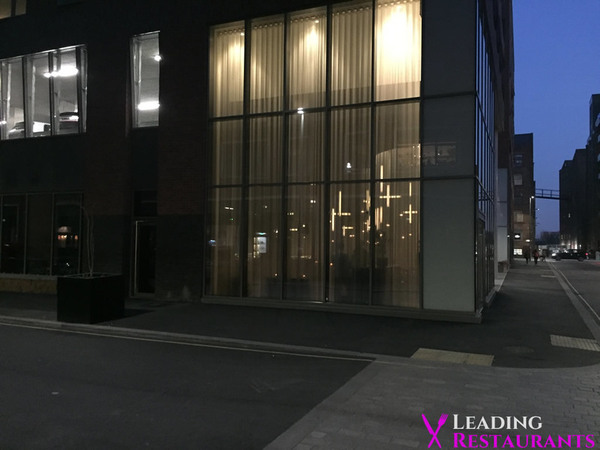 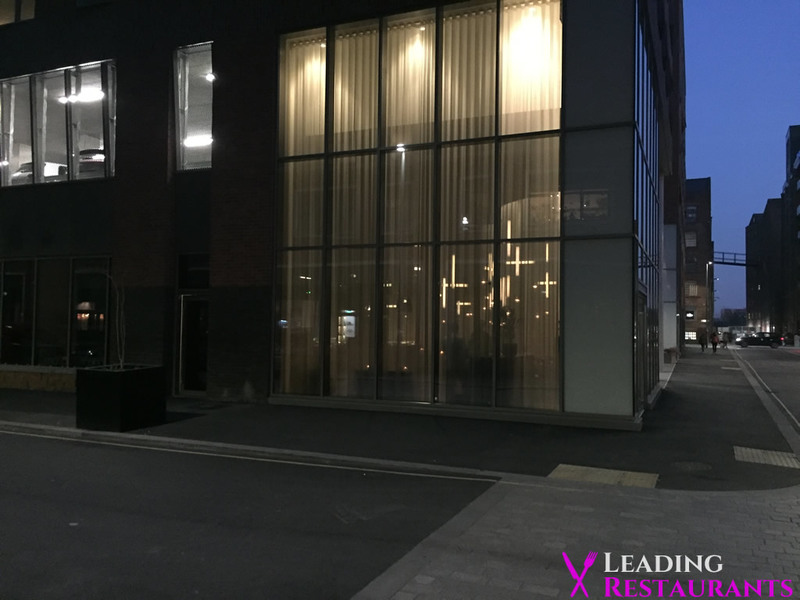 It's a little known fact that I used to work in the Ancoats area of Manchester, in a ground floor office. I recall one occasion where I stayed late to interview someone for a role, only to look up during the interview and see a couple of little scrotes climbing on the window bars outside the building, attempting to prise them off. Fortunately, my interviewee was a big fella and we were able to scare them off. Fun times. But safe to say, it's not my favourite area of Manchester (this was only about two years ago).

That said, it's an area that's undergone a bit of a revival recently (who doesn't love a bit of urban regeneration) and a restaurant that's looking to become a key part of the scenery is Mana, opened in October 2018 by Chef Patron Simon Martin. Following some generally positive reviews (and the occasional Twitter spat with local celebrity restaurant reviewers), I was very much looking forward to giving it a try as I visited for dinner with a friend, on a warm Wednesday evening in February.

Booking was painless through the Tock system, although they've now moved to Bookatable for future bookings. On launch they originally demanded full payment up front which always seemed a little bit bold to me for a brand new restaurant in this area; this then reduced to a deposit up front but there's now no payment required before dining whatsoever. I completely appreciate why restaurants charge up front (and I've happily booked many restaurants in this way) but there's no doubt it puts some people off. I suspect at this stage of the Mana journey, removing that requirement is a wise choice.

Externally, the building looks like a fairly standard glass box, typical of the new buildings in the area. Inside however, is something quite special. High ceilings, stunning lighting and a state of the art open kitchen are the order of the day and it all combines seamlessly to create a very impressive dining space. The tables are well spaced and not at all cramped and although on paper, the idea of all diners facing an open kitchen may sound slightly pretentious, in reality it's not at all and there's a great feel to the restaurant.

The welcome on arrival was warm and professional and I enjoyed a little G&T in the small bar area first. The drinks list has a good selection of spirits and beers although I did spy the non-alcoholic section was fairly slim (unless I missed it). The wine list is interesting but not massive, although it was disappointing to see only two wines available by the glass, perhaps the Coravin system might be useful here. We didn't see a food menu in advance of the meal but they already knew we were having the fourteen course option as I selected this when booking; I opted for the wine pairing whilst my friend stuck with ordering those couple of available wines by the glass. Before we moved to our table, we were given a nice little cup of warm mushroom broth. It had a lovely deep flavour and set the tone quite nicely for what was to come.

Once at our table, dinner began with a few snack courses; first up was the winter branch, a little cracker tube containing some horseradish cream. It was pleasant enough if not especially memorable. The 'Manchester Rarebit' that followed however, a puffed rice cracker with liver pate and cep mushroom disks, was a delightful little bite with a lovely flavour. Things then got even more exciting with the next dish of langoustine skewered on a spruce twig, and yes my friends, that twig was on fire (literally). "Let it burn out before you pick it up" said Chef Patron Simon as he delivered the course; wise advice, not that I had any intention of picking up a burning stick. Better safe than sorry though; I would imagine it helps his buildings insurance premiums if guests avoid setting the place on fire. I've had quite a few langoustine skewers on tasting menus recently, but these little nasturtium leave coated beauties were as good as any, completely delicious.

Oysters with chicken fat miso wrapped in cabbage were vibrantly scrumptious also, and the snack courses finished with the sizzling delivery of a little yakitori style eel skewer. It was an absolutely delightful little bite; I've never had eel that good and indeed it was my friends favourite course of the entire meal. That brought the excellent snack courses to an end; the only tiny issue I had with this part of the meal was that I'd been told my initial glass from the wine pairing had to last through the snack courses, but I'd not been told how many courses that was (and remember, we had no menu in advance). So, by the time the next wine was being poured, I'd not quite finished the first one. It sounds so trivial when you write it down, but it's just one of those little things I would tweak to help improve the experience.

We then moved into the main courses, starting with a shrimp tartare and a poured-at-the-table vinaigrette featuring arbol chilli. It was a stunner, delightfully fresh and the sauce was incredibly moreish. Things dropped down a little notch with the next course of milk curds and fermented cep mushrooms; it was a tasty dish but not on the same level as much of the menu. Not to worry though, the dish of charred onions that followed, with another incredible sauce (this time featuring fermented barley and kelp), was a knockout dish and genuinely my favourite of the meal, I loved that little bowl of oniony goodness.

Crab from Devon was next with a masa broth, another really enjoyable hit of flavour. The next dish I wasn't quite so enamoured with in all honesty; it was basically a big plate of various bits of barbecued brassica, with (so the menu told me) a pepita and beeswax paste. It's bold to serve a dish like this, effectively just various bits of green leaf on a plate, but for me it was just a bit too bold and didn't quite work as an overall course. The sourdough bread that came next (effectively its own course) was nice, but the butter was something else, absolutely divine as butter goes. It had travelled all the way from Norway (where it's made by one woman all on her own) as our chef for that course informed us.

Poached cod was next, again a dish I've had recently on other tasting menus, but this version was excellent. The cod was served with a top draw artichoke and parsley sauce; a classic but delicious combination. The crossover came next, in the form of sheep's milks mousse and sorrel kombucha. It worked well as a palette cleanser but wasn't a dish I'd rush back for in all honesty. It was also a bit tricky to eat with the wooden cutlery, but maybe that's just due to my chunky (manly) hands.

There was only one more proper dessert course, but it was a good'un, a ball of chocolate covered reindeer moss accompanied by a little bowl of whisky eggnog. I have had reindeer moss before, but not as a dessert, it was really something along the lines of chocolate covered shredded wheat. It was unquestionably delicious though and I really enjoyed it. The food was completed with a little not-on-the-menu extra (always nice), consisting of a small slice of baklava. It wasn't great to be honest, but perfectly edible (I believe a version of this will be on the next seasonal menu). To finish, we took coffee at the table which was fine; I was slightly fearful this might be yet another one of those restaurants that only serves one (invariably crap) type of filtered coffee, but there was absolutely no problem rustling me up a cappuccino, huzzah. It would have been nice to have been offered some fabulous petit fours to go with it, but alas, there were none. I always feel they help complete the experience plus I believe the kitchen here could create some real wizardry in the p4 department if they chose to. But hey ho, you can't have everything.

And so, a hugely enjoyable meal came to an end. The star of the show here is the sensational food; it was unquestionably one of my favourite meals in recent memory. The wine flight was good if not exceptional, but I'm sure that will evolve over time. All but one of the wines were poured at the table (as I much prefer) and the explanations were sound. Every restaurant would benefit from a world class sommelier and Mana is no different, but they're not easy to come by.

What did live up to the food however was the service. The menu pacing was absolutely spot on (so often restaurants struggle with this) and although only three tables were in, and they're coming to the end of their Winter menu, the overall standard of service was outstanding. Every chef who served us looked genuinely happy to be there and to be honest, as picky as I am, I couldn't really fault any aspect of the service whatsoever. Yes, at £105 the tasting menu is expensive and more than the vast majority of one Michelin star restaurants I've been to outside of London, but when you consider the technical excellence of the food, the stunning venue and the faultless service, it really did feel like a fairly priced meal.

After a quick chat with Chef Simon and a well deserved handshake, off we went. But there was still time for one more little surprise; as we were collecting our coats, Simon personally came over to open the door for us as we departed. How many other chef owners can you think of who would do that? It was a real touch of class and absolutely befitting of what was an outstanding experience. Yes there are things that could be improved (more wines by the glass, p4's etc) but regardless, this is unquestionably for me the best restaurant in Manchester and I'm already looking forward to a return visit in the not too distant future.

None really that I could see, but I'd stick with wearing a shirt for dinner.

Not a great selection of wine by the glass so I would suggest the wine pairing if you're not sharing a bottle of something else.

It's tricky to know how the guides will fall on this one; maybe the next seasonal menu won't be as good as this one. But for me, what I ate was fully worthy of a precious star. I'm not really optimistic given Michelin's hatred for Manchester (although the toilets do have the rolled up hand towels primed and ready), but time will tell. You could make a case for four AA rosettes and a seven in The Good Food Guide too, but I'd be surprised if either went straight in with that.
Group size: 2 adults. Total bill (including service): £349
View full restaurant details for Mana
« The Black Swan at Oldstead review
Parkers Arms review »