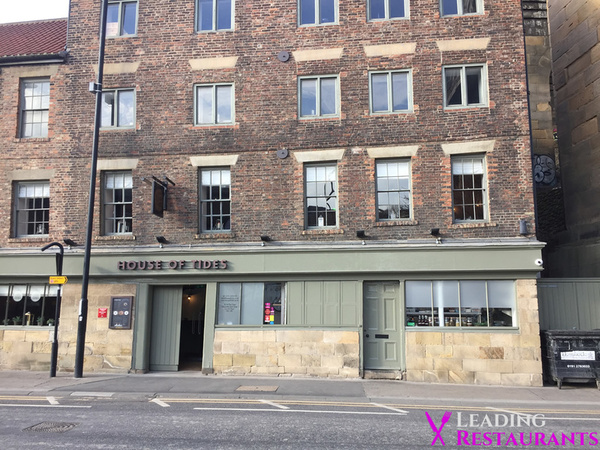 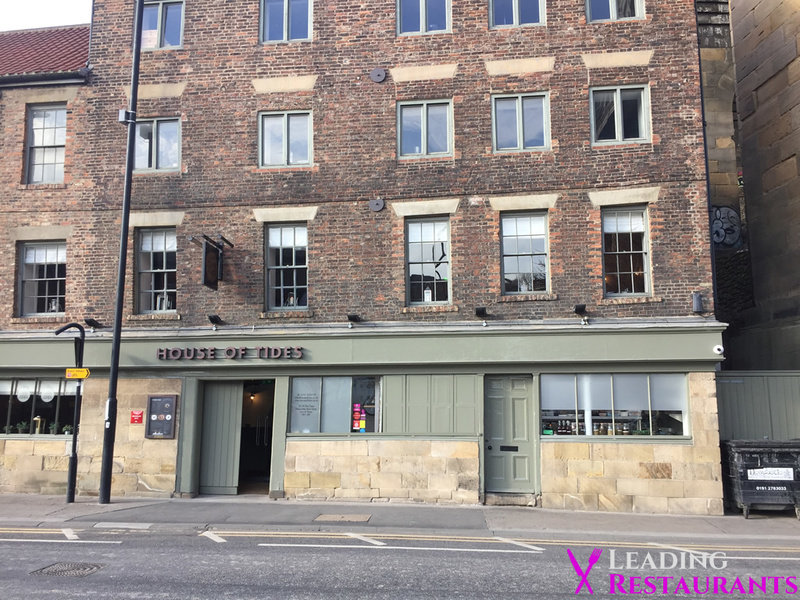 Opened in early 2014, House of Tides is a welcome piece of Geordie fine-dining sophistication, situated on the historic Newcastle quayside. Having been awarded a precious Michelin star twice previously at other restaurants, Chef Patron Kenny Atkinson (you may well have seen him on the telly) secured the same accolade in 2015 for his own restaurant, and the place seems to have gone from strength to strength since. I was looking forward to trying his food for the first time as my wife and I made the trip up to the North East for lunch on a gloriously sunny February Friday; the first meal of a glutenous weekend celebrating our anniversary.

Being in a city centre location, there's no dedicated parking, but the Close Swing Bridge pay and display car park is directly opposite the restaurant and we were able to grab a spot there. The welcome on arrival was pleasant (complete with best wishes for our anniversary) and although there's an option to have a drink in the bar area first, we were happy to be taken straight up to the table. Coats were taken without fuss although a few minutes later someone did sheepishly approach our table to give me a cloakroom token; given how quiet that particular service was, that did seem slightly unnecessary.

The restaurant is a very nice space; the building is Grade I listed and dates from the sixteenth century and I think they've retained the original character nicely. Our table on the first floor was by a window overlooking the quayside, and although the building isn't sat right on the river, it's still a pleasant view. It was (as I mentioned above) pretty quiet, not that I minded at all, but considering it's the only Michelin starred venue for a number of miles, to only have three tables in for lunch was a bit surprising. However I've no doubt the place is rocking in the evenings.

There's a choice of six or nine course tasting menus (only the nine course option is available on a Friday and Saturday evening) and like a lot of places, the same menu is cheaper at lunch which I always think is a smart way to build lunchtime trade. Being the glutton that I am, it had to be the nine courses for us and I opted for the matching wine flight also. For those wishing to choose their own vintages, the wine list is solid and there's some good drinks options too; my wife enjoyed two of the non-alcoholic cocktails available during our meal and there were a couple more she didn't try.

Lunch began with a little bit of drama; as the waiter brought out the first little nibble courses, the delicately poised parmesan churro toppled sideways on its little plate. I really wasn't fussed, but before I could say anything, all the elements were whisked away to be replaced which is good service I guess. As it happens, the parmesan churro with onion and truffle didn't really do a lot for me, but the cods roe tart did pack a lovely fishy flavour which I enjoyed.

Next up were three little courses that came in quick succession. The sweet and sour langoustine on a skewer had 'a hint of lime' according to our waitress. I have to say there was considerably more than a hint of lime juice on there, but it was still a lovely little bite and the cooking of the langoustine was spot on. Classic soft-and-crunch combinations of venison tartare on a taco, and then lobster on a cracker, were both very enjoyable as was the glass of Pol Roger Champagne from the wine flight which accompanied them, a suitably celebratory start to the meal.

After some decent sourdough bread, things went up a notch with the next course of mussels with caviar and a stunning sauce; it was a flavour packed dish that ate beautifully, a really good piece of work. The scallop with pork belly and sweetcorn that followed was very pleasant but in all honesty, a bit too safe and formulaic for me; I wasn't surprised to see that dish doesn't make the cut on the shortened menu. However, the final savoury course of lamb with a nice chunky shallot, black garlic and a lovage sauce was delicious, a top draw dish that I'd happily eat again and again.

Desserts were also impressive; first up was rhubarb with dulce de leche, a really fresh and vibrant dish with some zingy flavours. The final apple dessert featured a delightful apple mousse sandwich and some standout croissant flavoured ice cream; an excellent dish.

And so, a very enjoyable meal came to an end. The wine flight was enjoyable if not exceptional (wines were all poured at the table though which I much prefer), and service in general throughout was good; the only thing I found slightly perturbing is that there seemed to be a shift change of staff half way through lunch service. I would have expected the same staff to work through lunch and although the service from the replacement staff was also fine, I found the situation a bit odd to be honest. After the food had finished, we opted for coffee; they have only one type, but it was nice enough, and it was accompanied by a couple of nice little chocolate and caramel petit fours (one each). The bill arrived promptly (complete with 12.5% service charge) without issue, and they also provided a signed anniversary card, which was a small but appreciated touch.

I think overall, I'd describe House of Tides as an absolutely textbook one Michelin star restaurant; nothing more, nothing less. There's not an abundance of massive frills (or indeed thrills) here, but the cooking is excellent and the service is without fault also. I'd happily head back anytime and have absolutely no doubt whatsoever I'd be served another high quality meal.

None really although the website does state no shorts, sleeveless t-shirts, hats or flip flops. I was in jeans and a polo shirt which was fine for lunch, but I would wear a shirt for dinner.

There's a pay and display car park just across the road from the restaurant. Menus are cheaper at lunch. Decent non-alcoholic drink selection.

Entirely worthy of the star. I can live with four rosettes also, although I do feel the food was at the lower end of the four rosette scale. The Good Food Guide are extremely harsh based on what I ate; the food is closer to a seven than a five in my opinion.
Group size: 2 adults. Total bill (including service): £296.
View full restaurant details for House of Tides
« Ynyshir review
Raby Hunt review »