The Refectory at the Old Bell Hotel

Home ➜ The Refectory at the Old Bell Hotel
This restaurant is currently listed as not holding any awards.

Not Listed
No Rosettes
Not in Top 100

Add to your favourites 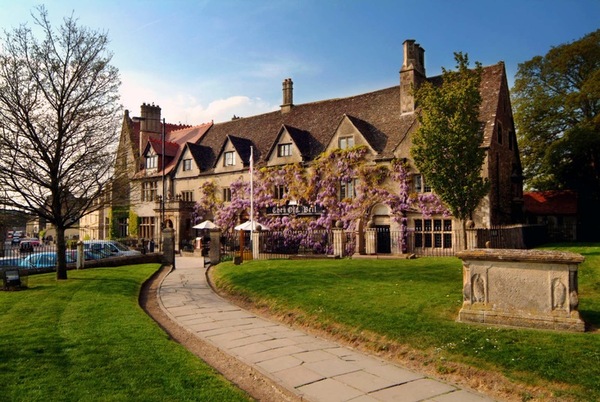 Please log in to your account to add saved locations; we can then show you the distance and directions from your saved locations to this restaurant!
Log in now or Create a free account in 30 seconds

My Husband and I booked a stay at The Old Bell Hotel to enjoy time away after the unsettling times over the past five months. We decided on booking The Master Suite with dinner, bed and breakfast. This is supposed one of the more sumptuous rooms, but we quickly found that this wasn't the case. On arrival, we painfully navigated around a pokey car park, and then, upon entering the hotel, we were greeted by restaurant staff, who took us through to the reception area, which was just a desk, with a laptop on it. We were shown to our room, and after being told our key was already in the room, we realised that it wasn't. This lead us to going back down to reception, who seemed oblivious to what we were talking about. After a good look around the room, we realised the room was NOT the one we booked on the website. We were expecting a free standing bath with a walk in shower. Instead, we got a basic bathroom, with a bath and overhead shower. The shower was non - adjustable so when we used it, we were literally standing in the plughole. One of the drawers that we went to use had a huge crack running through the bottom of it, so was unusable. On entering the bedroom, there was an unsightly orange stain on the carpet, which was obviously a put off, and is not exceptable for the money paid. On the right side of the room is a supposedly locked door, and when we asked staff what it was for, they had no idea what we were talking about. This was unsettling for my children, and our question wasn't answered. The room is advertised as having views, but the only view we had is of a huge, overgrown plant that completely covers the window. The fridge, coffee machine and kettle are hidden away in a wardrobe, and when we went to make a drink, we discovered that the kettle had water in it, and was full of limescale. Due to this, we took the tea's with us for home use, but avoided using the kettle while there. On the website, we are told that cookies, macroons and fresh fruit are brought up to the room. This didn't happen. I had to ask for them, and even then it was a box of five melted chocolate truffles that were brought up. Personally, I think The Old Bell need to update their website. Something that was very disappointing, was the room did not have a king size bed, as promised on the website. Instead, it had two singles stuck together. When my Husband and I visit hotels, it is common knowledge that we share a bed. We felt common, and it is false advertising. At night, don't expect to get a decent sleep, as the room is an oven, and music bangs within the hotel until 11:30pm. We went to phone reception about the noise, but for some reason, both phones were disconnected. At 1am, and again at 3:20am, drunken yobs were out side the hotel shouting, and urinating below our bedroom window. On entering the restaurant for dinner, not all staff had masks, and female staff wore them with noses poking out. Why bother at all? We also found many guests were not complying with the mask rule. We were flabbergasted to discover that two dogs were on the premises. We love dogs, but not in a four star hotel, and we definitely don't want to listen to barking during our meal. The food was very good, but service was generally quite slow. The breakfast in the morning was below-par. It was dry, the bacon was burnt, and the juice was not fresh. Again, staff were walking around with masks below the nose. On leaving, we expressed our grievances with a staff member, who didn't discuss things further, or resolve anything. This is a lovely looking hotel, in a sleepy attractive village, but this is not a four star hotel. We have stayed in three star hotels that are better than this. When you pay over £400 for dinner, bed and breakfast, you expect the best, so unfortunately, we won't be returning. Posted by Jo McDonald 7 months ago
Tweets by @oldesthotel