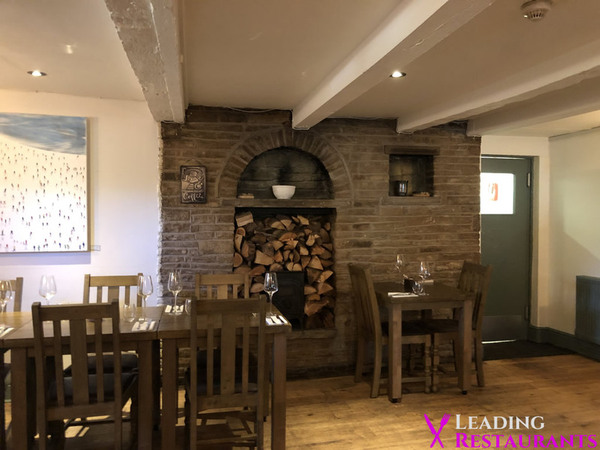 It had been over eighteen months since my last visit to The Pack Horse in the Derbyshire village of Hayfield. Since then, the glowing reviews from the local and indeed national press have continued to flow abundantly, as well as the place receiving notable visits from some of the leading UK restaurant guides. Although I'd not exactly been blown away on my previous visit, I was still anticipating a quality meal as I rocked up for lunch with my wife and two young children, on a drizzly November Saturday.

There's a small car park on site but as previously, we parked a short walk away on a nearby road. The welcome on arrival was friendly enough and we were shown to our table on the left hand side of the pub. I still like the feel of the place (albeit there's not a massive amount of natural light); it's been nicely finished inside and is a perfectly amiable space to enjoy a quality meal. We arrived near the start of lunch service but the place filled up nicely as the afternoon went on.

On offer at lunch is a full carte menu with a very decent number of choices per course (including several pre meal snack options) and there's a children's menu too which although pretty short (three mains, one dessert) is always appreciated. Drinks wise there's a good selection, including several cocktails, a well thought out wine list and a couple of non-alcoholic options too. Sadly, they'd run out of Seedlip which was my wife's first request (and we heard another table ask for it after us too) but the kids were happy with their apple juices; I stuck with my usual Hendricks and tonics during the meal which were perfectly well delivered.

To begin, we ordered a couple of portions of the sourdough bread from the snack section of the menu. The bread was good, but to be honest with hindsight one portion would have been enough for the table. For starters, I had the cured trout, served with a cucumber and chili relish and a seaweed salad cream. The trout itself was lovely but both the relish and salad cream were a little bit underwhelming, I'd been hoping for a bit more impact from this dish. My wife though had the white onion and garlic soup and described it as one of the best soups she's ever eaten (and she's had a few); high praise indeed.

My daughter had the fish and chips with peas from the children's menu which was very tasty also (the fish was perfectly cooked), and my young son was very happy with just a side of chips; both the children's meals were delivered with our starters with no fuss.

For mains, I opted for the venison loin wellington; it sounded great on the menu and it didn't disappoint. The venison was cooked well (albeit a tad chewier than I would have ideally liked in places) and was surrounded by a delicious pickled walnut duxelles and some pretty faultless pastry. When you throw a flavoursome red cabbage ketchup into the mix too, you're left with a very accomplished (and very tasty) plate of food. My wife had the rabbit and pig's head pie, complete with mustard mashed potato and buttered cabbage. Whilst the accompaniments were nice enough, the pie itself was delicious and an absolute triumph; my wife wouldn't normally pick a pie from a carte menu but she was glad she did.

The pacing up until this point had been fine but we did seem to be abandoned a little bit as the pub got busier, and it took a while to be both offered and receive our desserts. Fortunately though, they were definitely worth the wait.

My slice of salted caramel custard tart was just sensational; I've had a lot of good custard tarts over the years but this was genuinely the best I can recall; texturally perfect and utterly delicious. The accompanying pistachio cream was a bit lacking in pistachio flavour, but that's a very minor complaint, it was a great dessert. My wife enjoyed her chocolate and peanut butter delice too, but the malt ice cream it was served with wasn't great. My daughter didn't fancy dessert this time, but my young son was perfectly happy with a couple of scoops of vanilla ice cream, although that was the only choice for dessert on the children's menu which was a bit of shame.

And that as they say, was pretty much that. Overall this was a very enjoyable lunch, service was fine throughout, not as good as the very best pub restaurants we've eaten in, but much better than our previous visit which is all you can ask for really. The real star here though is what's coming out of the kitchen; the food was good last time but there's been a marked step up in the quality of the dishes being served since our last visit; there's now some seriously impressive food being delivered.

Yes, you're going to pay a lot more here than you will for standard pub grub elsewhere, but although I wouldn't class our meal as great value, I wouldn't say it was overpriced either. I think all the great press is fully justified and I'm certain strong entries in the major food guides will follow soon; I'd be delighted to visit again and look forward to doing so.

Child and dog friendly. Some parking on site.

I think a listing in the Michelin guide in the near future is a certainty, and I'd suggest the food is worthy of strong entries in the other major UK restaurant guides also.
Group size: 2 adults & 2 children. Total bill: £123.
View full restaurant details for The Pack Horse
« The Chequers Inn review
Shaun Rankin at Grantley Hall review »