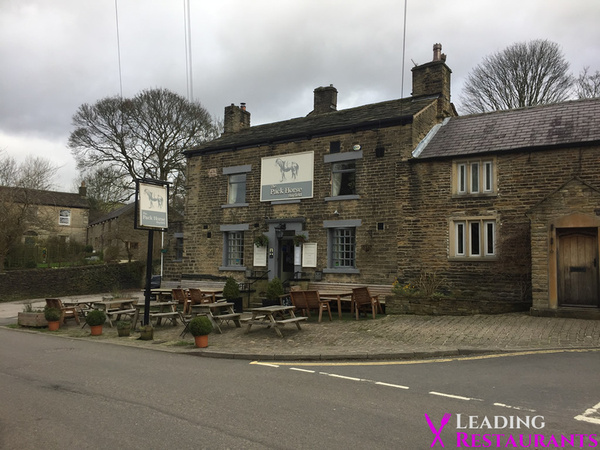 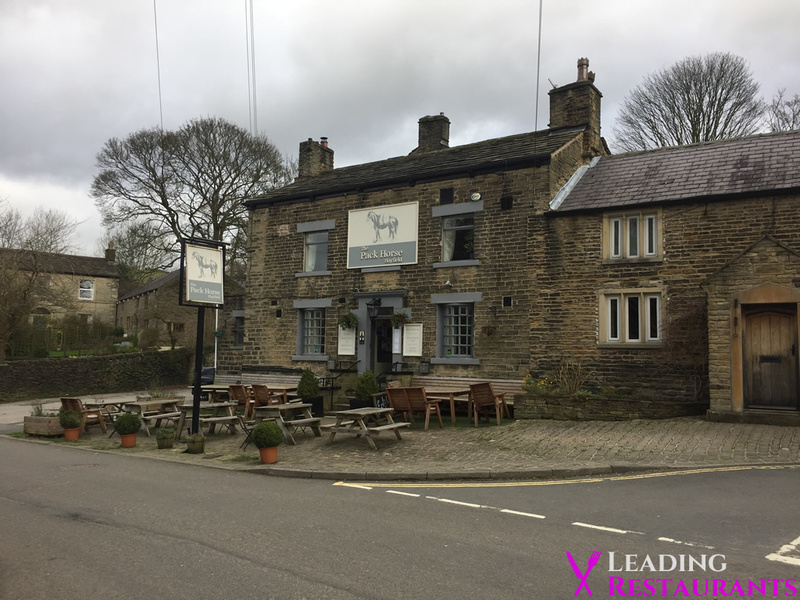 The quaint village of Hayfield in Derbyshire is a place I know fairly well; not least because it's where my parents have lived for the past three years or so. I've visited a few eateries there in that time but one place I've somehow managed to avoid is The Pack Horse, a gastro pub with a growing reputation for serving some thoroughly decent food. I decided the time had come to put that right (ironically on a weekend my parents were away) so duly rocked up for lunch with my wife and two young children, on a slightly miserable Saturday in February.

The place was fairly dead on arrival, but the welcome was warm and we were shown to our table. There's a fairly traditional pub feel here and I liked it; it's clear it functions very much as a pub for those who just want to wander in for a drink, as well as a restaurant. We were situated in a corner by the log burner and not far from the main bar, in truth the table was maybe a tad small for four people but apart from that, it was perfectly comfortable. On offer at lunch is a good-value-sounding set menu, a lighter bar menu and a full carte menu, which we ordered from. There's also a short two course children's menu which is appreciated when eating with kids (albeit, I always hope to see three courses on offer) and this one even doubled as a colouring-in page (bring your own crayons though).

The drinks list is fairly comprehensive for a pub also including an interesting wine selection and a couple of non-alcoholic options such as Seedlip which my wife enjoys. Although, given the slightly bewildered look on the face of our waitress when my wife asked for it, I don't think it's too popular here. I opted for my usual Hendrick's and tonic which was fine (albeit served with lime rather than cucumber) and the kids were perfectly happy with their still apple juice.

After we'd placed our food order, I actually decided I'd quite like to try some of the sourdough bread listed on the menu (I know, I'm such an awkward customer) and a couple of portions of this were swiftly delivered. Obviously at a lot of restaurants we visit you get "free" bread if you're ordering from a full price menu, but I wasn't expecting that here and I had no issue paying for it. The bread was perfectly decent but the cultured butter was the star of the show, very nice indeed.

Lunch began for me with the crispy (i.e. shredded and breaded) pig's trotter. I've had a few variations of this dish in my time but this version was very tasty, with the Armagnac prune ketchup being a particularly memorable accompaniment; I'd happily eat that dish again at any point. My wife had slightly less luck with her king scallops featuring parsnips and a curry hollandaise; whilst the flavours of the dish overall were good, the scallops were over cooked, not by a huge amount but enough to get that nasty rubber texture I always dread, a real shame. My baby son had no issues whatsoever with a bowl of triple cooked chips though and my daughter enjoyed her sausages and chips too; both of these were delivered with the starters with no issue.

There was a bit of a longer-than-I-would-have-liked wait for the mains to arrive, but my Skrei cod fillet with a cauliflower puree and seaweed butter was worth the wait. I thought this was a triumph and the highlight of the meal for me; the cooking of the fish was spot on and the dish overall was delicious; no complaints on that one whatsoever. My wife's Barnsley chop was an enjoyable plate too; the lamb was nicely cooked and seasoned although the accompanying salsa verde was very heavy on garlic; I didn't mind when I tried a bit, but my wife found it a bit too overpowering.

Of course, there was no chance of us leaving without dessert and I opted for the white chocolate and ginger cheesecake served with a pile of rhubarb. The rhubarb was nice, the cheesecake itself was perfectly edible but a little bit uneventful and quite some way from the best cheesecakes I've had in terms of overall flavour. It was also a little bit of a mean slice I thought size wise. My wife had the vanilla creme brulee which was very tasty, the only let down being the accompanying meadowsweet shortbread biscuit which just wasn't the right consistency for a good shortbread. My daughter had no complaints regarding her chocolate and vanilla ice cream from the children's menu.

And that was pretty much that for what was an enjoyable lunch. On the whole, I thought the food was good; yes there were elements that could be improved but there was some very competent cooking on display too. Pricing is perhaps an issue; the dish costs sit somewhere around what I'd expect for a one/two AA rosette restaurant and the food isn't quite there yet for me, although it's certainly not far away from that level. I think this was best demonstrated by a couple who came in during our meal, sat on the table opposite to me, took one look at the menu and quickly legged it; I joked with the waitress we'd scared them away. I appreciate of course it's really tough in a small rural village to get that balance right between people willing to pay for a top meal, and people wandering in off the street expecting budget pub grub.

The main problem though (and the main reason I've not given a higher score) was the service. One waitress was good but the other wasn't; I don't want to sound too brutal as think it was her first day so maybe nerves played a part, but she didn't really look like she wanted to be there and it was a touch uncomfortable. It's also the first time I can ever remember being served a main course before being given the cutlery to eat it with. And look, I get it, if you're training someone new why not send them to the friendly looking couple with two kids to build that experience, but when you're paying a good amount for lunch, I think it's reasonable to expect good service too.

Overall though, we enjoyed our lunch here and although there's room for improvement in a couple of areas, we'd happily go back and I look forward to doing so. I wish them continued success and I'm sure it won't be too long before one or two of the major restaurant guides start paying them a bit of serious attention too.

None, it's a local pub as much as anything.

I think the food here is close to one AA rosette level but what I ate wasn't quite there yet. I do think it's worthy of a Michelin plate though.
Group size: 2 adults & 2 children. Total bill: £106.
View full restaurant details for The Pack Horse
« Mamucium review
The Angel at Hetton review »