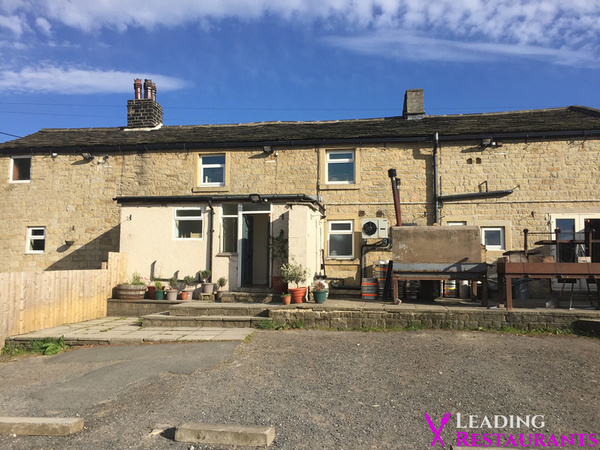 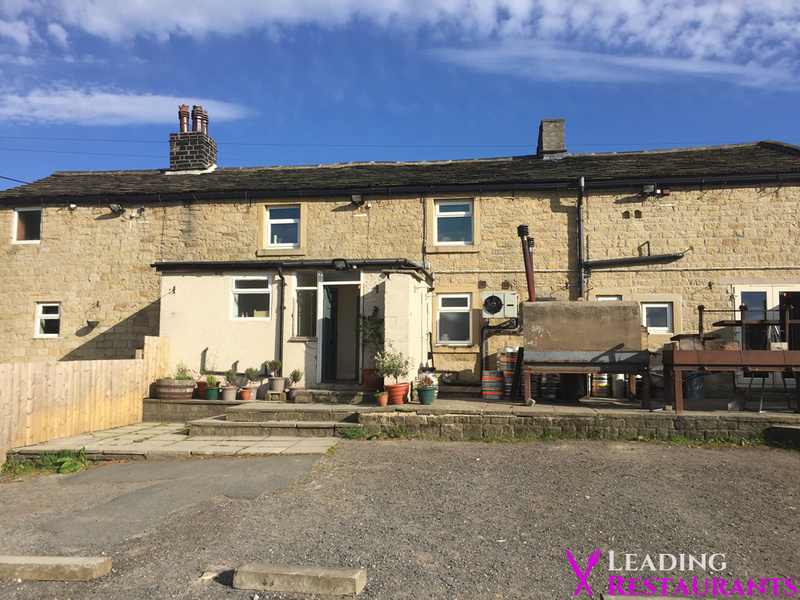 It's fair to say the The Moorcock Inn has flown a little bit under the radar as far as the major food guides go. Despite very favourable reviews from the local and indeed national press, and overwhelmingly positive Tripadvisor feedback too, only Michelin have even given the place a sniff (and even then, bestowed just the horribly ambiguous plate award) since it was relaunched by duo Aimee Turford and Alisdair Brooke-Taylor in early 2018. Not that the lack of guide recognition worried me whatsoever, I was still very much expecting an interesting meal as I made the not-inconsiderable trip with my wife for dinner on a gloriously sunny Friday evening in May.

The pub is situated in the picturesque Upper Calder Valley in West Yorkshire and on a sunny evening, it really is a lovely spot. There's an ample car park on site and with the help of our trusty sat nav, the place wasn't too difficult to find. We'd made the trip straight after I finished work and I'd allowed time for the dreaded Friday traffic, however that never materialised. It wasn't a problem however and we were warmly greeted on arrival at the bar and able to enjoy a drink before the meal; this is very much a functioning local pub as well as a restaurant. There's a decent selection of gins and although I wouldn't describe the non-alcoholic selection as stellar, they did have some slightly non-standard options (such as rose lemonade and Seedlip) which was good to see.

It got to a little past our reservation time and we hadn't heard anything (bear in mind we had to get back to save the grandparents from the kids after) so we trotted up to the bar and our table was sorted shortly afterwards. We were the first in the restaurant area for the evening and I thought it was a nice space; they could maybe consider making some more of the spectacular views (I was stuck next to a wall and my wife just had a very small window) but that's a minor complaint. One thing I did like was that our table was large (could have comfortably seated four people on it) and the spacing of the tables was generous. The restaurant did fill up as the evening went on, giving the place a decent atmosphere too.

Our waitress for the evening arrived with our menus shortly after; I might as well mention now that she was fantastic and the highlight of the whole experience. She was so warm and polite but faultless with the menu explanations and wine delivery also; she's a real asset to the restaurant. It's tasting menus only here; a shorter one and a longer one (we opted for the longer, naturally) and there are additional supplemental courses offered along the way should you so desire (we had those too); it's all made very clear on the menu so there are no surprises. I also opted for the matching wine flight too.

Dinner began with some decent sourdough bread and butter (both made on site apparently which is impressive) and a snack consisting of a boiled egg with toast soldiers and a couple of slices of cured meat. My wife enjoyed this; I'm not a massive boiled egg fan but it was pleasant enough start to the meal. The menu began properly with a bowl of potato soup with sea truffle and cods roe; it was one of the best soups I've had for a long time, delicious.

Next up was a sharing dish (there were a few of those) with a cabbage-flower crispy pancake, smoked trout and various herbs and leaves (from their own garden). This was probably my favourite dish of the meal; it wasn't particularly exciting but contained some nice fresh flavours. That unfortunately was the last sign of any fresh deliciousness, as all the savoury courses that followed then became a bit of a mush of brown and umami flavours; there really wasn't any light and shade at all.

The salt baked golden beets with a sunflower type humus was tasty but certainly fell into the above category of brownness, and the optional seabass dish (although the fish was tasty and perfectly cooked) was accompanied by not a particularly great tomato sauce. I suppose given the tasting menu format, I was just expecting far more considered and refined flavours, not bowls of unmemorable nothingness.

Nowhere was this more evident than the meat courses; the slow cooked pork jowl served in a watery stock was a bit of a shocker (and I wasn't surprised to see it doesn't make the cut on the shorter menu) and the braised venison that followed was poor too; my wife couldn't even finish it. I was expecting a lovely cut of venison with a great sauce; what they actually do is shred the whole animal, age and prepare it, and put it in a little sticky ball. Admirable approach to using the whole animal; yes. Delicious end result; no. We opted for the £10 optional cheese course to share next; this consisted of three slices of the same not-exactly-amazing cheese (wish I'd read the menu properly) with soda bread and some decent endive marmalade. I have to be honest and say it was probably the worst cheese course experience I've ever received on a tasting menu; not what I was expecting at all.

Would desserts save the day? In short, not really. The digestive tea crossover was in effect warmed up juice and the first dessert of angelica ice cream with rhubarb and coffee although pleasant, wasn't especially memorable. Last up was another sharing dessert of plum liqueur pancake with goose egg ice cream. The ice cream I have to say was very impressive; silky smooth with a lovely flavour. But the pancake, although well made, was dull as can be with not even a hint of the promised plum flavour.

And so, a bit of a disappointing meal came to an end. The wine flight was OK with some interesting wines, and they have suggested pairings ready for the optional courses too (including a glass of Port for the cheese course) which I enjoyed also. All bar a couple of wines were poured at the table too which was good to see. The food though on the whole was disappointing; I always feel a restaurant has to be at a certain level to serve a tasting menu and whilst I can completely understand why they've opted for that format, I just don't feel The Moorcock Inn is at that level. What made the food experience even worse was the poor menu pacing with very long waits between certain courses; overall for the menu we received, I feel the meal just lasted far too long.

Yes, I fully accept that the food is only £45 which for a tasting menu is not expensive, but the £175 we spent in total would comfortably get you three great courses for two at other pub-restaurants less than an hour away such as The White Swan or The Angel at Hetton; the standard of food at both of those is on a completely different level.

Having said all that, I loved the feel of the place and as I mentioned earlier, the warmth of the service is fantastic. The dining room was pretty full on our visit which is great to see for a rural venue, and you can just tell from the feel and the smiles on the faces of the staff, that the owners are good people. You can't please all of the people all of the time as the old adage goes, and although I genuinely hope the restaurant continues to thrive, this just wasn't an experience I'm likely to repeat.

None that I could see; it's very much a pleasant local pub.

Plenty of parking on site. There's no automatically included service charge. Allow lots of time (i.e. over three hours) for your meal.

Given the positive reviews elsewhere and tasting menu format, I was sure before visiting that I'd walk out of this pub thinking the food is worthy of three (or at the very least, two) rosettes. Unfortunately, it didn't really turn out like that, but I do feel there's just about enough here to warrant a rosette.
Group size: 2 adults. Total bill: £175
View full restaurant details for The Moorcock Inn
« Salt review
Kala review »