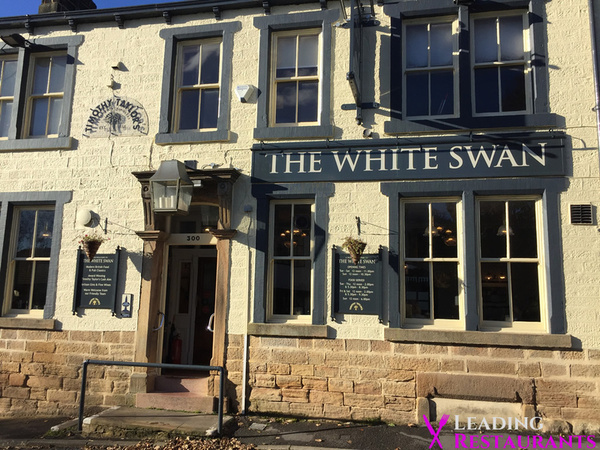 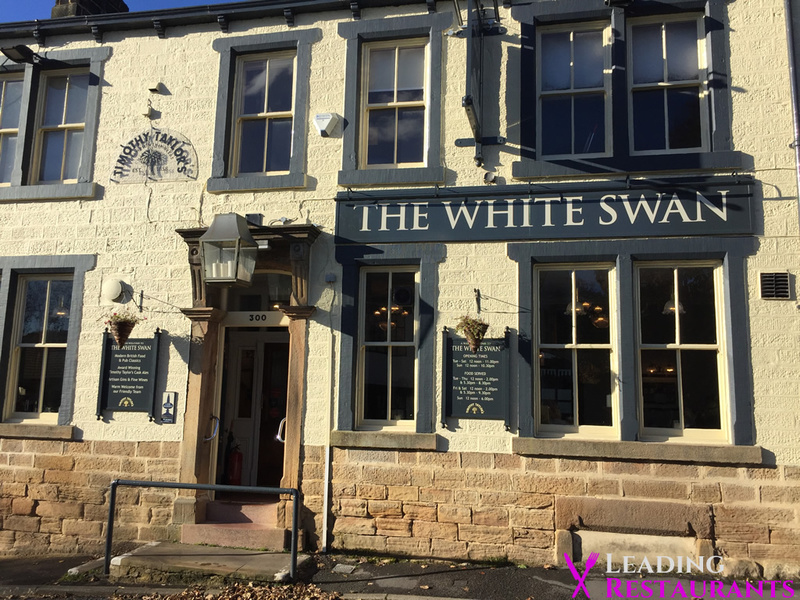 The subjective local perception of a restaurant recognised for serving good food is a curious thing. Whilst munching on a very tasty burger at Solita in Manchester (incidentally, my favourite burger joint in all the world) with a good friend from the Burnley area, I remarked that in a few days I'd be visiting The White Swan in Fence, not far from where he lives. His next words were literally "Oooh la-di-da, The White Swan" before proceeding to tell me how expensive and upmarket the place is. Hey, fine dining is not for everyone and I respect that, but at the same time my friend's a pretty successful dentist and not exactly on the breadline.

Not that his words remotely phased me as in truth, I'd been meaning to visit for a while. After all, two AA rosettes and a six in The Good Food Guide in particular are noteworthy achievements. But of course, once the precious star arrived from the Michelin Guide in October, like the fickle guide-loving glutton that I am, I just had to get myself booked in. And so, I duly rocked up on a cold but sunny November Thursday for lunch with my wife, young daughter and baby son.

The pub exterior is smart and clean (definitely not your average local boozer) and there's a reasonably ample car park on site also. Inside the decor is perfectly in keeping with a high-end pub experience but there's little quirks of traditional pub life too, such as mismatched chairs on every table. The welcome on arrival was warm (and perfectly child friendly) and we were shown to our table, complete with a high chair already in place as requested.

There's a well thought out wine list, with an impressive selection of more than fifteen wines available by the glass, and a smart drinks list too; I enjoyed a couple of decent Burnley Batch G&T's with my meal. Like many pub venues, the non-alcoholic selection is pretty non-existent, but that wasn't a surprise. Food wise there's a tasting menu (not something I'd expect the kids to sit through) and an intriguing, albeit fairly short, carte menu. It's a menu that regularly changes based on the available ingredients and whilst it's admirable that they're prepared to stick to such a rigid format, it can cause some issues. For example, when another table enquired, they were told there's no vegetarian main course available but that the chef could put something together based on vegetables used on other courses, not a particularly enticing offer to be honest. In the end our vegetarian friend on the other table (perhaps wisely) decided they could eat fish for the day.

This does of course cause a bit of an issue with children as well; whilst the vast majority of restaurants my daughter has visited have been happy to provide some not-on-the-menu kids options (including many Michelin starred venues), there's no such option here. Fortunately, they have chips, and combined with a lovely piece of John Dory from the menu, a delicious child friendly dish was created. For me, after a rather solid but nonetheless tasty bread roll, lunch began with the roast Orkney scallop. In truth the scallop, although very tasty, was a tad over, but what made the dish was a stunningly vibrant curry and coriander sauce, absolutely delicious.

My wife had less luck with her starter of beetroot with goat's cheese which although pretty to look at, didn't really pack the flavour she'd been hoping for. However, her pork main with cauliflower and black pudding was a very tasty dish. I was slightly envious as although my main of venison with carrots was perfectly edible, I found the dish a little bit uninspired and dare I say, slightly formulaic. At the start of the meal, every table is given the "would you like some chips to share" upsell which my wife couldn't resist; I would say the mains here don't need them, but they were good chips.

Desserts were the surprise of the day; whilst my wife enjoyed a top-notch rice pudding, I devoured an absolutely stunning tiramisu deconstruction, it really was a delicious dessert of chocolate and caramel gloriousness. It was accompanied by some delicately flavoured banana ice cream, which they were able to produce an extra scoop of for my daughter.

After a slightly longer-than-I-would-have-liked wait to be offered the bill, an enjoyable lunch came to an end. Overall, this was an accomplished meal produced by a chef clearly on top form; the food was fully deserving I would say of the accolades given. On the downside, whilst the meal here was not in anyway overpriced, it perhaps wasn't as good a value as I'd thought it would be. They've recently increased the three course price from £28 to £32 which of course you can't possibly begrudge as it's still a great deal for this level of food. But, by the time you throw in all the supplements and half a portion of upsold chips, my three courses came in at £53, which although by no means at the top end of restaurant pricing, is perhaps not such stellar value.

And maybe my good friend had a point in the end with regards to the local reputation; it was a Thursday lunch and people were dressed smartly and speaking in hushed tones; whilst that's no issue at all for me, the regular glaring "how could you bring well behaved children to a Michelin starred venue" looks from a couple of tables did rather sour the atmosphere slightly. I do always find it curious when customers think their dated views should override restaurant policy, but such is life. And of course, you can't blame the restaurant for that.

But look, overall the food was of a high standard, the staff were warm and (child) friendly and all things considered, you could a lot worse than visit here for a meal in my opinion; I'm sure we'll be back.

None, although a lot of people did seem to be dressed quite smartly.

The star is fully deserved as is the six from The Good Food Guide. As often happens with pub restaurants, the AA are being a bit mean.
Group size: 2 adults & 2 children. Total bill (including service): £131.
View full restaurant details for The White Swan
« Joro review
Moor Hall review »