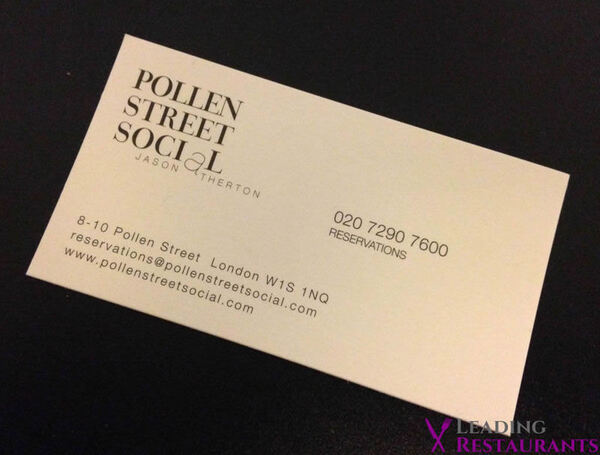 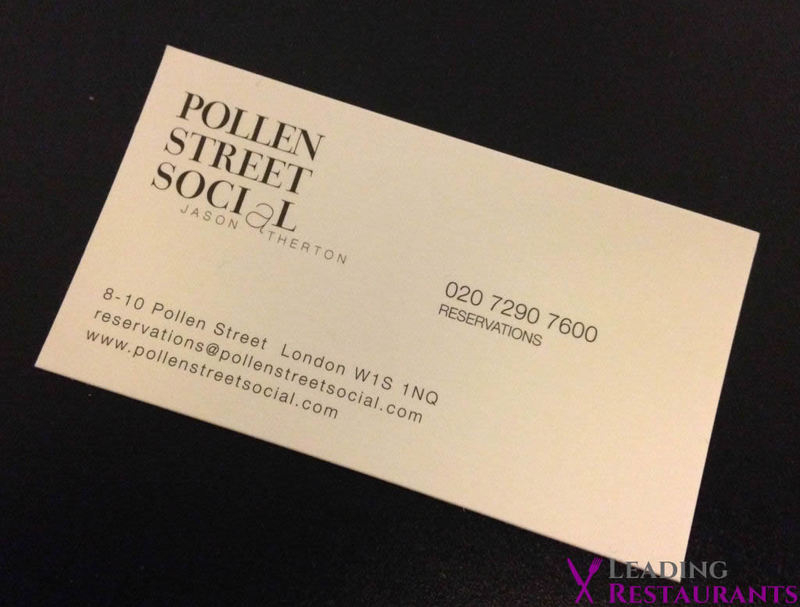 The idea of "deformalised fine dining", as described on the Pollen Street Social website, always strikes me as a thoroughly modern concept. The chance to eat great food with no requirement for hushed tones or fear of aloof service does carry a weighty appeal. I would say, in the main, Jason Atherton's flagship restaurant does successfully manage to execute this vision.

I say in the main largely because if you put top rate food in a trendy (by my standards anyway) restaurant, you will inevitably attract loud mouthed (gobby as we'd say up North) food snobs, who are painfully convinced their superior arrogance warrants international attention. I had the misfortune to be sat next to one such gentleman as I took my wife for Saturday lunch; he looked at our table like we'd got lost on the way to KFC. Of course, this is not the fault of the restaurant, but there is an air of inevitability about this behaviour in such a place.

Our visit began with a visit to the reception desk; being given a token in exchange for our coats reminded me more of past nightclub visits than a leading restaurant but I suppose it's a perfectly practical solution if many of your guests own identical clothes. The room itself I do like, modern, light and airy and certainly reflective of the relaxed vision for the restaurant. The wine list is comprehensive but my wife and I opted for a couple of impressive cocktails each with our meal, including some very enjoyable non-alcoholic efforts. I'm sure they're all good but the fancy G&T "Ten Pollen" and chocolate infused "Identity Crisis" offerings were particularly worthy of note.

The food began with a stunning array of canapes and nibbles; absolutely delightful. Goats cheese with truffle oil and the mushroom tea were a joy; a fabulous start to the meal. My wife and I ordered from the very reasonably priced lunch menu; my egg with black pudding to start was a little bit underwhelming but the ox cheek main was very tasty. It's the kind of dish you'd be a bit disappointed with if it was served from the carte, but as a lunch menu dish it worked really well and was packed full of flavour. My wife had the guinea fowl which she wasn't overly impressed with, but I thought it was another excellent dish, with the accompanying mayonnaise an enlightened touch.

Service up until this point had been excellent, apart I suppose from the barman who brought over our cocktails; he looked thoroughly unimpressed with the whole affair, perhaps he was just having a bad day. But then came dessert. The lunch menu at Pollen Street Social has a good choice of three desserts; however upon asking for a look at the dessert offerings, we were only presented with the carte menu by what seemed like a fairly inexperienced waiter. Not a problem; when he came back we asked if we could have a copy of the lunch menu. He scuttled away and returned with two copies of..... the tasting menu.... before hurriedly leaving the scene of his comedic crime once again. OK I GET IT, YOU REALLY WANT ME TO ORDER DESSERT FROM THE CARTE, JUST GIVE ME A MINUTE.

In fairness, after we'd made our choice another waiter we'd been dealing with did recognise the mistake and come to apologise but we were happy enough with our choices and of course, it wasn't any major inconvenience. There is an option to sit at the dessert counter (a first for me in this standard of restaurant) but we were rather comfortable and close enough to see what was going on as the desserts were made, so opted to stay at our table. My choice was the apple parfait; it was a skilful plate of little "apples" and very enjoyable although it did feel a little like a tasting menu dish they'd try to scale up to carte size, not entirely successfully I would say. My wife had the chocolate marquise tower which was very good but unlikely to blow anyone's mind as she'd hoped. Make no mistake, these were very accomplished desserts, just not quite the stellar mouth-bursting flavour experiences I was longing for.

Lunch finished with an extremely pleasant selection of petit fours, including mini ice cream cones of apple sorbet covered in white chocolate and some little cherry meringues. Once again it was evident that even the little touches had been carefully thought about.

There's definitely something quite special about Pollen Street Social; I found the whole lunch experience tremendously enjoyable; this is a very slick restaurant serving some really top rate food accompanied by charming and professional service. I actually think despite a rather stellar reputation already, it's perhaps a place that's underrated by serious food lovers; that shouldn't be the case because what's being produced here really is worthy of considerable note.

It's relaxed but a smart place. I went in jeans and a shirt for lunch which was fine; I'd possibly go with smart trousers for dinner.

Definitely sample a cocktail or two.

The guides are quite split on Pollen Street Social. Whilst The Good Food Guide have this as the sixth best food in the country with a stratospheric 9/10, Michelin and The AA are considerably more low key in their respective assessments. I'm actually more with the GFG on this one, although I do think they've overcooked it a little. I can see why Michelin wouldn't award two stars to this kind of place, but if it really is just about the food, I genuinely think the food on offer here is worthy of two stars.
Group size: 2 adults. Total bill (including service): £145.
View full restaurant details for Pollen Street Social
« Restaurant Gordon Ramsay review
The Ledbury review »