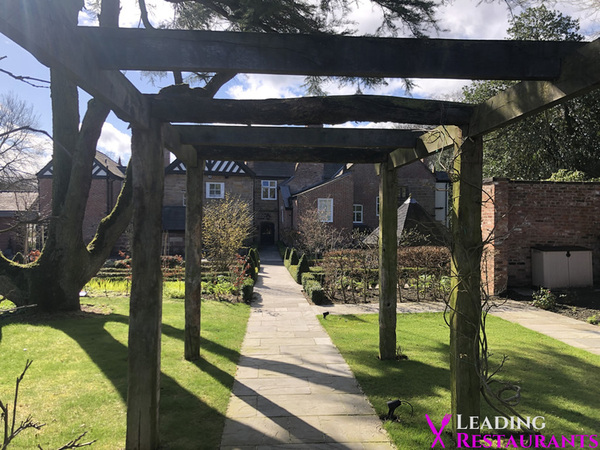 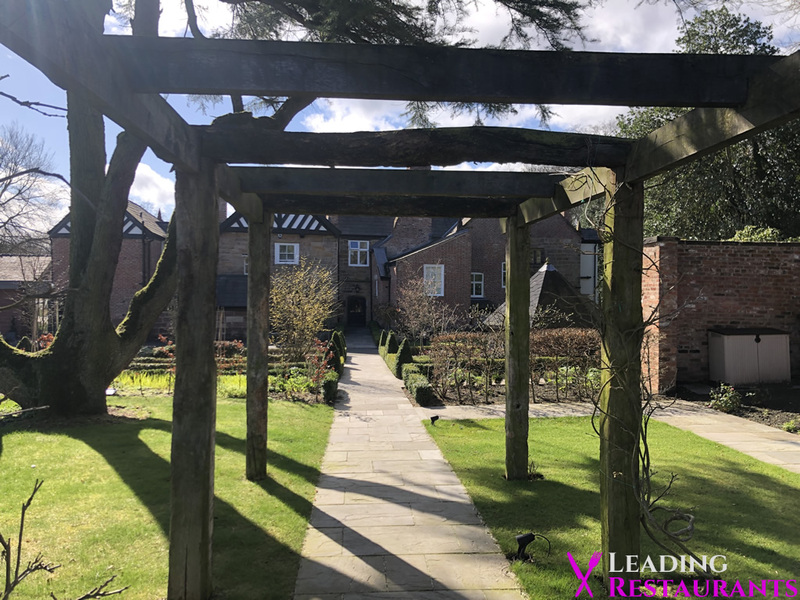 It had been over three and a half years since my last visit to Moor Hall in the village of Aughton. Back then, the restaurant was basking in the glory of a recently awarded second Michelin star, and as well as retaining those stars, many other awards have continued to flow ever since. I was eagerly anticipating a top class meal, as I made the trip for lunch with my wife on a gloriously sunny March Saturday, to celebrate our anniversary.

Externally the building is very much as I remember; following a short drive through the pleasant grounds, there's a good sized car park next to the kitchen garden, which you can walk through to reach the restaurant. I'd be told when booking (and also on the call to confirm our booking a week or so before our visit) that we should arrive thirty minutes before our reservation time, and we duly did just that. The welcome on arrival was warm and professional, coats were taken and we were shown to the comfortable lounge area to peruse the various menus.

As far as the aperitifs go, there isn't a massive selection on the drinks list (I feel like there were more on our last visit) but my made-especially-for-Moor-Hall gin and tonic was very nice, as was my wife's non-alcoholic cucumber lemonade, which she said was delicious. On offer at lunch is the full eight course menu, a shorter four course menu and two levels of wine flight (from memory I think these were titled 'Prestige' and 'Rarity'). There's also a non-alcoholic tea and infusions flight, which is a notable new addition since last I visited.

For us, it had to be the full eight courses; I opted for the 'Prestige' wine flight and for my wife, being a lover of tea and also a non-drinker, the tea flight seemed like a very promising choice. I should add that of course the wine list (now viewable on an interactive tablet) is still extensive, with many interesting bottles including several from lesser known regions.

Lunch began in the lounge with an impressive selection of pre meal snacks; first up was the in-house cured charcuturie which was very nice. Next came black pudding parcels and a delicate little pastry case with chorizo and egg yolk. Raw mackerel with raspberry and radish was delightfully fresh, and was delivered alongside a tin of spreadable cod roe mousse with caviar which was suitably smooth and luxurious. For the last of the nibbles, we were taken into the kitchen in by our waiter, the kitchen was in full swing as we were served smoked eel in a delicate potato case, a delicious ending to what was a very impressive selection of food before the main event. Yes, many of the snacks were very similar to my previous visit, but the overall standard has definitely improved.

After our little kitchen visit, we were shown to our table in the main dining room. The space is very much as I remembered; light, airy and modern, and with some midday sun shining in, it's a very pleasant space indeed to enjoy a quality meal. Lunch proper began with oyster, surrounded by white beetroot, served with a prepared-at-the-table dill and buttermilk sauce. It was a suitably tasty start to a meal on a sunny day.

Next came the well established dish of carrots, with Doddington cheese being added at the table by one of the chefs. This dish was also accompanied by some lovely bread, complete with herb butter and a quenelled-at-the-table dollop of plain butter. It was delicious, I think the plating finesse and precision has improved since my last visit, and the bread and butter was excellent also.

Turnip and crab was next, with the broth again being prepared at the table this time by one of the waiting staff. I think out of all the dishes we ate during the meal, this was the one I was least blown away by; the broth was lovely but the crab felt slightly under seasoned and overall the dish, although very tasty and well presented, wasn't quite on the same level as the other courses.

Next up was a long time classic; beef tartare served with celeriac, mustard and shallot. I've had several versions of this (Rogan inspired) dish over the years, but I genuinely think this was the most delicious version I've had. Our waiter informed us our service was the first where this dish had been made with Moorfields Wagyu X from Devon, and it certainly seemed to help push the dish to the next level.

The top class food continued with an accomplished dish of scallop, fermented green tomato and cauliflower, before a stunning turbot dish, cooked on the bone and accompanied by salsify with a mussel and roe sauce. I'd have a lot of turbot on tasting menus over the years, but this was genuinely one of the finest fish dishes I've had; great flavours with pretty much faultless execution.

Last of the savoury courses was venison (or Wild Dorset Sika Deer to be precise), served with kale, beetroot and blackberry. I remember on my very first visit to Moor Hall being suitably underwhelmed by the venison dish, but not this time, it was a triumph. The venison plate itself was great, but if that wasn't enough and it was accompanied by a simply delicious little pot of ragout, and just in case you wanted more, it was also served with some delightful liver and honey parfait and a brioche bun. They've really pulled out all the stops for this course and in my view it's paid off, it's a fantastic dish all round.

Cheese was offered next, and as on my previous visit, I couldn't resist a visit to the cheese room; there is the option to have this after dessert, but I prefer to have it before. The selection was great (we let our waiter decide) and the accompaniments (including some top rate chutney) were all delicious too. I was happy to let the sommelier recommend a wine pairing also, and enjoyed a glass of the slightly off-piste selection of 2012 Le Tordare Recioto too.

The crossover was again familiar and came in the form of gingerbread and ginger ice cream; my wife and I both very much enjoyed this. First of the desserts was rhubarb with almond, yoghurt and blood orange. It was fresh and delicious and a very accomplished little bowl. This was followed by another familiar dessert of apple, served with woodruff and birch sap. I think it's this dish in particular that highlights how far Moor Hall has moved on since the second star was awarded in 2018; the last time this I ate this dish it was great, but this time both the finesse and taste have gone up to the next level. It was a visually beautiful dish, and tasted stunning, a really, really top class dessert.

For the final dessert of the day, we were shown back to the lounge to enjoyed a very pleasant little dish of preserved apricot, with honey, mead and buckwheat. My wife and I both opted for a cappuccino (decaf was no problem for my wife) and to go with this we were presented with a super selection of petit fours; this is another area the restaurant has definitely improved upon since my last visit. We tried some of everything (the selection included wrapped fudge, chocolate shards and more) and they were all very tasty. And just to complete the meal, we were also presented with an anniversary card signed by the team to celebrate the occasion.

Overall, this was an exceptional meal and the best I've had in recent memory. The food was top rate from a kitchen that really is striving for absolute perfection, and the service throughout was outstanding too. My wine flight was very good, with some interesting wines all delivered very well, but the biggest surprise really was my wife's tea and infusion flight. In all honesty I'd expected this to just be there as a bit of an afterthought, but every tea was explained with the same enthusiasm and detail as my wines, and my wife absolutely loved it. It's rarer than you might think for restaurants to put together a great non-alcoholic flight, but this ticked every box.

As well as the service being outstanding, the staff themselves were all brilliant too. One thing I noticed about the wine flight is they'd often leave the bottle on the table for a few minutes, which is something I don't see so much very more. The intention of course if to allow you to view the bottle and take a picture if you're so inclined, but out of curiosity I asked one of the waiters and the sommelier if tables ever just helped themselves. The answer was predictably a light hearted but frustrated "yes, all the time!" so if you're reading this with the same intention, please try and restrain yourself.

The elephant in the room is of course the pricing. Like so many top class restaurants, the pricing has increased massively at Moor Hall over the past couple of COVID filled years, and indeed although my meal was virtually the same as my last visit in terms of selection (full tasting menu, wine flight, cheese, the only addition this time was the non-alcoholic flight), my trip this time cost a whopping 87% more, including the 12.5% service charge of course. I appreciate it's all relative, and I should say the food here is light years ahead of certain other Northern restaurants that have increased prices even more substantially in the same period.

I did notice at lunch, although the restaurant was busy, we were the only table who took the full tasting menu, with all the other tables (that I could see) opting for the shorter lunch menu. As a top class restaurant, you have to offer your full menu at lunch and we probably wouldn't have visited if they didn't, but I did wonder if maybe there's a happy medium of offering the full menu for a lower price at non-peak times. Many high end restaurants used to do this, you don't see it so much nowadays, but it's a shame as several of the dishes that don't make it onto the shortened lunch menu were delicious.

Nonetheless, this was still an outstanding experience and a meal I'd be delighted to repeat. Clearly the mission here is three stars, and the focus is on absolutely perfecting the menu rather than regularly changing it (which I have no issue with at all). Personally, I think it's well worthy of that accolade and I'm very much looking forward to visiting again in future. Sadly, given the cost (and I should mention, the menu price is going up again in the summer), I'm going to have to save up for a considerable time first.

None really, but I wouldn't turn up in shorts and sandals personally.

The tea and infusion flight is excellent if you like that sort of thing.

Now that Michelin have finally realised the North has restaurants worthy of three stars, I personally think Moor Hall will be next in line to receive them. I ate here shortly after they were awarded two stars and the improvements since then in all areas are huge.
Group size: 2 adults. Total bill (including service): £751.
View full restaurant details for Moor Hall
« Shaun Rankin at Grantley Hall review
The Hand at Llanarmon review »