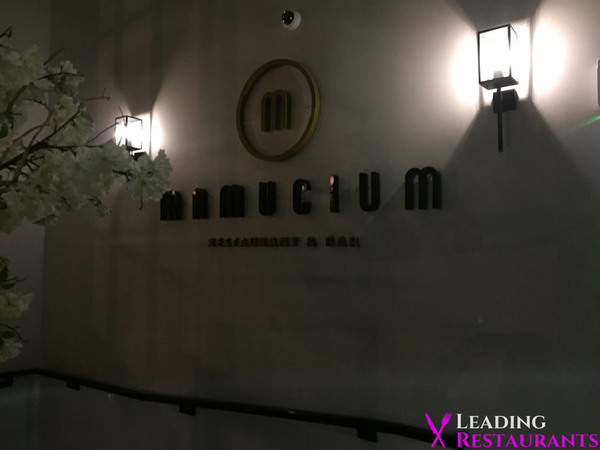 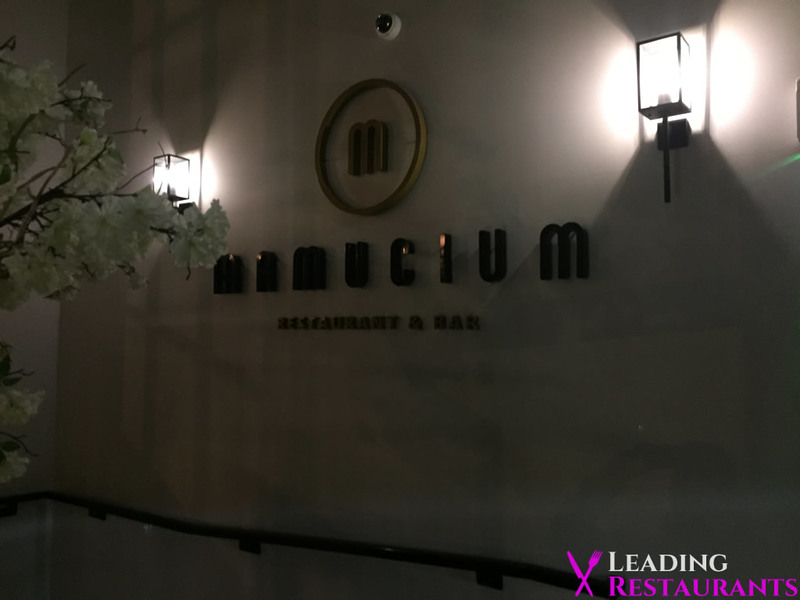 Opened at the end of 2018 as part of the new Hotel Indigo in Manchester, Mamucium (apparently named after the ancient Roman fort that was the birthplace of Manchester) is a fine dining restaurant promising signature dishes and family favourites recreated with a Mancunian twist, at least according to the website anyway. Ever the optimist, I was reasonably hopeful of a decent meal as I ventured in for dinner with a friend, on a miserable Thursday evening in January.

One source of my optimism was the recently awarded two AA rosettes which the restaurant picked up earlier in January (of course it's not on the official AA website yet, they take a while); a recent award from the AA is usually a pretty solid indicator that I'll be served some decent food. On the flip side though, I'd eaten at The River Restaurant at The Lowry Hotel in May 2018, also a holder of two rosettes, and had a pretty dire meal, including being subjected to what still remains the worst dessert I've even been served on a two-rosette menu. The connection? Executive head chef Andrew Green was previously at The Lowry before moving to Mamucium in 2018 to launch the restaurant.

Of course, it would be unfair to blame that poor experience on one person and I arrived with an open mind, looking forward to what I hoped would be a memorable meal. The restaurant has a dedicated entrance, but it's also well signposted from the main hotel lobby. The welcome on arrival was a little bit cold in truth from the waitress who met us (after we'd stood around for a bit at the entrance stand) and we were shown to our table in the restaurant, not too far away from the open kitchen.

The first thing that really struck me was the decor and unfortunately, not in a good way. There's a lot of exposed piping, I suppose in an effort to provide an industrial vibe, but it's been done really badly from an aesthetic point of view and the room just looks unfinished. The design of the tables and chairs resembles an American diner and there's very limited spacing between some of the tables; it's just not at all what I was expecting for a restaurant serving good quality good. The hard bound menus at least have a touch of class about them; we went straight to the carte for our choices so I didn't look at any other menus, but I believe there is a set menu and tasting menu available also.

After a perfectly decent Hendricks and tonic (my friend stuck with water), lunch began for me with the smoked Cheshire beef hash, delivered under a smoke filled cloche. I must confess to being partial to a little bit of theatre in restaurants so I very much enjoyed the delivery of this, but more importantly it was a pretty delicious dish too. A just right egg stuck on top of some well seasoned and well balanced beef hash is a joyous thing; it was a very tasty plate of food. My friend opted for the scallops with black pudding (one of my favourite combinations) and thoroughly enjoyed their dish also.

Next up came... a wait. The restaurant was fairly busy but I wasn't expecting the mains to take quite so long. In fairness after a few minutes, my friend did pay a visit to the facilities so it's possible they were holding the plates, but even before he went we'd been waiting quite a while. When he returned our mains arrived after a couple of minutes. I'd opted for the Lancashire hotpot which in reality is a deconstructed version rather than what you might expect. It was a nice dish overall; the cooking of the lamb was good and the confit leg parcel was a nice idea, but I wasn't totally blown away by this one. It didn't help that the lamb was served lukewarm, but I'll give the kitchen the benefit of the doubt in case that was due to waiting for my friend to return from the toilet. My friend had the beef fillet and reported it was a perfectly tasty plate.

Of course, there's no way I was leaving without dessert and for me it had to be the 'Mamucium Manchester Tart'; I mean hey, if they put the restaurant name on it, it's got to be good right? And in fairness, it was a very tasty dessert; as good a custard tart as I can recall eating, and it arrived with some perfectly nice accompaniments also. My friend opted for the chocolate torte which he had no complaints about whatsoever.

And so, an enjoyable dinner came to an end. The star of the show here is the food; although not without fault, there's some good cooking on display combined with some punching flavours. Sadly, the venue itself isn't worthy of the food for me and the service was less than stellar also. Whilst one of our waitresses was great, the other looked like she really didn't want to be there. On top of that we asked for a new bottle of water during the meal which never arrived, yet was still on the bill (and so we had to ask for it to be removed), never a great sign that all is running as smoothly as it should be. Nonetheless, I enjoyed my evening overall and based on the food alone, I'd happily go back.

None really that I could see.

Don't let the decor put you off.

I think the food is right on the edge between one and two rosettes, but I've no issue with what the AA awarded. I'm not sure in all honesty it's the kind of restaurant either Michelin or The Good Food Guide would include (and of course, neither of them did in their 2020 guides), but for me the food is good enough for a mention in both.
Group size: 2 adults. Total bill (including service): £113
View full restaurant details for Mamucium
« The Merchant's Yard review
The Pack Horse review »