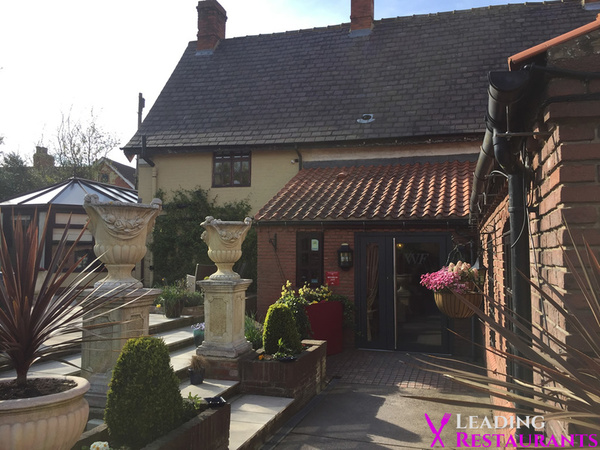 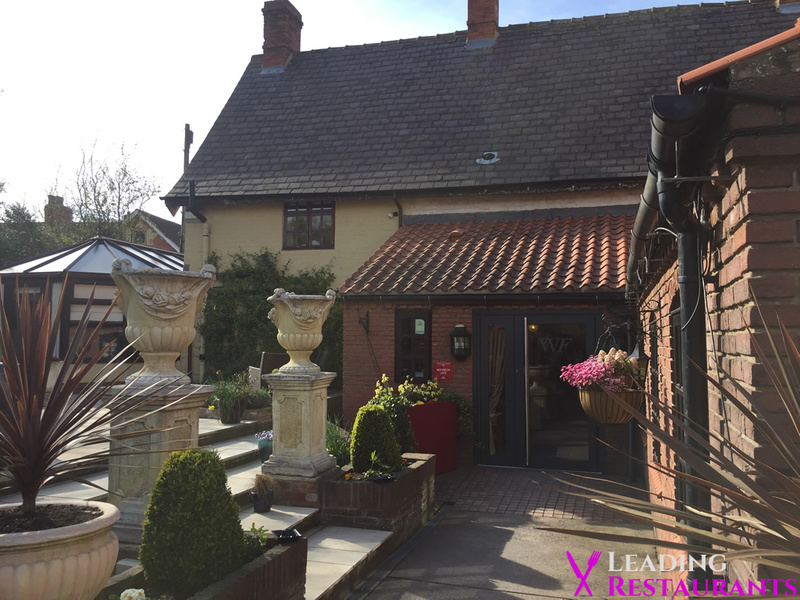 As the old saying goes (or was it Guinness who invented the phrase), good things come to those who wait. Having taken over Winteringham Fields in 2005, Chef Patron Colin McGurran set about transforming the venue into a fine dining destination, helped no doubt by the classic profile-building aid of a few TV appearances. By 2016 he'd achieved an impressive four AA rosettes, but it was a further two years before the precious star from our favourite tyre munching inspectors arrived. I was very much looking forward to giving his food a try as I visited with my wife for lunch on a sunny April Saturday, to celebrate my birthday.

We weren't entirely sure where to park on arrival, but we managed to grab a spot almost directly opposite the car park entrance. There are bedrooms here too of course as well as the restaurant, split between the main (sixteenth century) house and some other outbuildings. We were warmly greeted as soon as we got out of our car and shown through to the lounge to peruse the drinks and wine lists. The lounge itself is nicely finished with plenty of nods to the history of the building. Although we visited for lunch, we were able to select the eight course surprise dinner menu having asked in advance (rather than the normal six course surprise lunch menu, a carte menu is available too), however we weren't actually shown the food menu until after the meal.

There's a very healthy drinks list with a wide range of gin's and cocktails (I enjoyed my usual Hendricks and tonic to start) including four or five non-alcoholic mocktails which was good to see. My wife sampled a few of these during the meal; although they were a bit basic in appearance, they tasted nice which I suppose is the most important thing. The wine list is comprehensive with some interesting selections, but I opted for the matching wine flight to go with the meal. Before the pre dinner nibbles arrived, we were offered an extra salmon appetiser for a 'supplement' with no price quoted; given this was in effect just an extra little bite and there was no mention whatsoever of price, I wasn't expecting any kind of significant cost for this.

The aforementioned nibbles arrived shortly afterwards and what I really liked service wise was that as my wife had popped to the ladies room when these were delivered, a different waiter came back to deliver the explanation again when she returned, a nice touch of class I thought. The appetisers consisted of a little cheese and eel tartlet and a smoked bacon crumpet, both very tasty. The additional salmon, with caviar and cream cheese was pleasant also. What wasn't as pleasant was the price, which I didn't find out until I received the bill later; those little extra salmon appetisers had cost me £15.50... each! You could get a decent starter for that price at a lot of Michelin star restaurants; I really did find the whole episode quite misleading and unnecessarily deceptive, which was a real shame as it did sour the whole experience somewhat.

After our appetisers and pre-dinner drinks, we were shown through to the dining room for our meal. It was again a nice room, with plenty of space between the tables and a nice amount of light on what was a sunny day. There were two types of bread to start; white onion and treacle & ale; these were fine if not spectacular (but we were offered more later in the meal which is always nice). Lunch began with whipped cod roe with a slice of beetroot over the top, cooked for a long time at a high heat as our waiter told us. It was a very tasty little plate to start that we both thoroughly enjoyed.

Next up was an equally tasty plate of potato with ham and artichoke puree, followed by a lovely mushroom dish with pearl barley risotto. The cured monkfish that came next was another high class course, made particularly interesting by the matched white wine from Lincolnshire. The sommelier had a little bit of fun here by pouring the wine and asking me to guess what it was as he trundled off for a bit, which was a nice touch.

The menu pacing up until this point had been pretty good but there was a noticeable wait for the next course which was a shame. It's so difficult to keep pacing consistent throughout the meal, particularly when you have tables on different tasting menus (and indeed they offer a carte option at lunch too) and only the very best restaurants can keep that pace consistent for the entire meal. Nonetheless, the wait was worth it because the next course of stonebass with prawn and a lovely prawn bisque was an excellent dish that we both agreed tasted great. Last of the savoury dishes was roast guinea fowl, not an easy meat to deliver well, but the cooking of my guinea fowl breast was absolute perfection and made for another thoroughly enjoyable plate of food.

After some very good savoury cooking, I was expecting great things from the dessert courses, but in all honesty, these were a bit of a let down. The first (almost a pre-dessert) of coconut with lime and white chocolate was pleasant enough, and came complete with a little bit of happy birthday writing on the plate for me, which is something I always appreciate. For the finale of the meal I was expecting fireworks, but what I got instead was a bit of a damp squib. It was rhubarb and oats with a ginger bread foam; the presentation was incredibly dull (just looked like a bowl of brown goo when it arrived) and although the flavours weren't unpleasant, I just found it a pretty uninspiring end to what had been a very enjoyable meal on the whole.

I'd normally expect to be offered cheese before dessert nowadays; the offer came after the meal here which I'd say is slightly unusual for most tasting menus now. But on the positive side, we were able to share a plate (for £15, plus a glass of Port for myself); the selection was extensive and we enjoyed the various cheeses we tried, including quite a fiery one to finish, which our waiter wisely advised us to leave until the end.

And so, after some OK coffee and decent petit fours (which we opted to take at the table) to finish, an enjoyable lunch came to an end. Service throughout was excellent and I very much enjoyed the wine flight too which was most interesting and delivered well by the sommelier; all bar one of the wines were poured at the table too which was good to see. Whilst the food on the whole was very good, it was perhaps not quite as good as I'd hoped; the desserts in particular left me feeling slightly deflated. And yes, that ludicrous and undisclosed supplement for an extra nibble at the beginning did definitely leave a little bit of a sour taste too; you just don't expect a quality restaurant to try and shaft you like that in this day and age.

But look, overall Winteringham Fields is still an excellent restaurant which I would happily venture back to at any point in future without any doubt whatsoever that I'd be served a high quality meal backed by top class service. You can't really ask for much more than that.

Smart casual; they request no trainers or sportswear. I went with jeans, a shirt and shoes for lunch which was fine, but some people were a little smarter.

I'd recommend the wine flight and there's a decent range of non-alcoholic options too.

I'm happy enough with the star but in truth, I don't think the food I ate was quite at the four rosette level.
Group size: 2 adults. Total bill (including service): £397
View full restaurant details for Winteringham Fields
« The Angel at Hetton review
The Pheasant Hotel review »