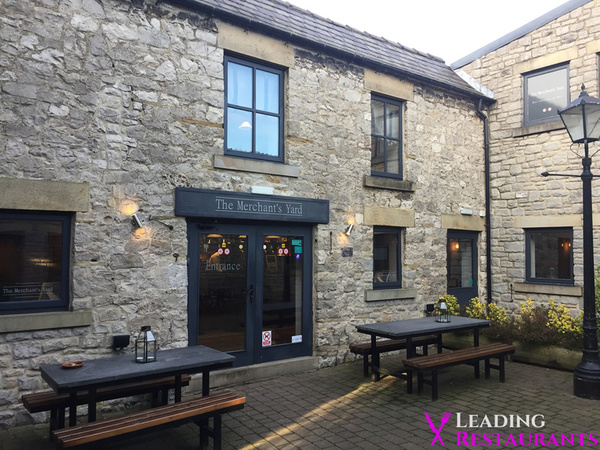 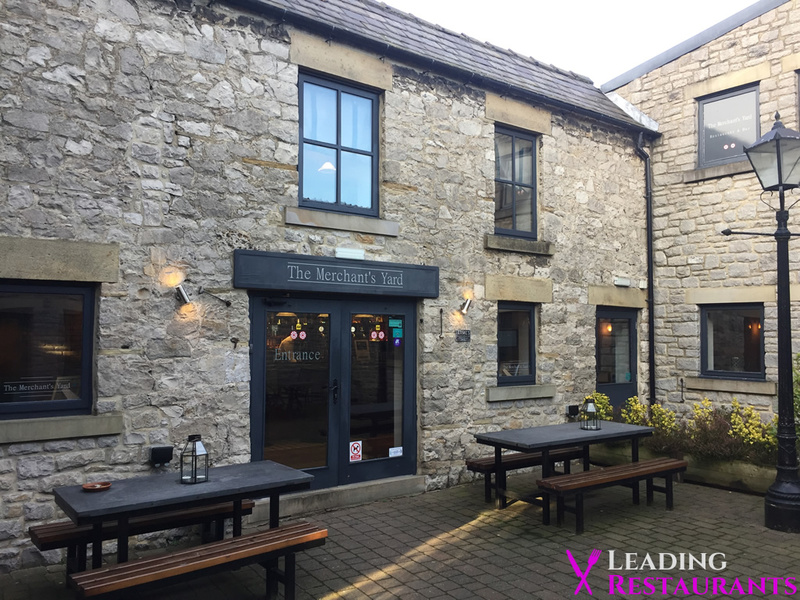 Two years have flown by since my last visit to The Merchant's Yard in the quaint Derbyshire village of Tideswell. It was a meal I'd very much enjoyed and whilst the restaurant has successfully retained its two AA rosettes in that period, I was a little bit surprised to still see no recognition in the other major guides this year, given the high standard of the meal last time out. Not that I was at all bothered by a lack of guide recognition of course, I was still expecting another quality meal as I rocked up for lunch with my wife and two young children on a cold January Saturday, to celebrate my wife's birthday.

The welcome on arrival was professional rather than friendly, and we were shown to our table in the main downstairs dining area (on our previous visit we'd sat upstairs). I had let them know when booking we were visiting for my wife's birthday, but there was no mention of this whatsoever for our entire visit which was a shame. I'd also requested a high chair when booking which wasn't in place at the table, but this was swiftly offered to us and arrived shortly afterwards. The restaurant is still a really nice, modern space without being too over the top, I'm certainly a fan of the interior.

On offer at lunch are a multitude of menus; there's a light lunch menu, an early bird menu, a full carte menu (including grill and pizza sections), they even offer afternoon tea. The carte menu does include a good number of children's options too which was nice to see. Drinks wise, the selection is extensive and features a number of cocktails, including some non-alcoholic options which is always a plus. After a perfectly decent Hendricks and tonic for myself, we were ready for what I was hoping would be some top rate food.

First up was some decent focaccia bread (pretty much my favourite bread type in the world) which was tasty enough. The starters didn't take long to arrive and lunch proper began for me with the BBQ beef, essentially a chunk of beef coated in a rather sweet barbecue sauce, accompanied by some neatly arranged piles including mushroom and charred sweetcorn. It was an OK dish but I'd been expecting a little bit more pizzazz in all honesty, it was a little dull. It was however considerably better than my wife's Southern fried chicken wings; the chicken was over cooked and under seasoned (never a great combination); the brutal truth is that in a blind taste test, 100% of people would prefer chicken from KFC. The accompanying coleslaw was better but not enough to save the dish. For the kids, my daughter did enjoy a perfectly well made margherita pizza and my baby son tucked into a portion of chunky chips without any complaints.

For mains, I opted for the venison. My two small chunks of venison were tasty enough albeit really, really rare and I think many people would have sent it back. The rest of the dish though was pleasant if not spectacular, with various root vegetable components and some nicely seasoned little meat balls. My wife opted for the vegetable and halloumi skewer (very different to what she'd usually order, but that's her fault!); it came on a huge board and certainly made an impact. All the individual elements tasted fine this time, but it's the kind of dish that's just impossible to elevate to a fine dining level.

Then came... a wait. The pacing and service up to this point had been pretty good, but it took an absolute age for anyone to come back and clear our mains and offer us dessert. The restaurant had filled up a little by this point, but it was still far from full and the staff were really far less attentive than they might have been. Once the dessert menus were delivered, it then took quite a while again before our order was taken.

My wife opted for the ice cream sundae which was perfectly tasty if not especially memorable. I had less luck with my tonka bean creme brulee; it had a very noticeable eggy taste, never a good sign. To be absolutely honest, it was one of the worst brulee's I've had for quite a while and not what I was expecting. My daughter and son had no issue with their chocolate ice cream and raspberry sorbet however.

Then came another very long wait as we attempted to flag someone down and get the bill (at least the long waits made it easy for me not to leave a tip) but I was eventually able to get our waitress's attention and bring our rather disappointing meal came to an end. It's unfortunate, but the food we were served was nowhere near the level it was two years ago; back then there was some great cookery combined with some real imagination on the plate, there was very little of either on this visit.

And of course, It's not difficult to see why. With the massive number of different food options available in an effort I suppose to generate as much mass appeal as possible, it's virtually impossible to deliver high quality plates of food to those who expect it. It's a real shame because despite the disappointing food, this is a restaurant that still has a lot going for it. But look, if offering a massive menu with mass appeal is what they need to do to stay open, then I completely respect that. Sadly though, for me the food is no longer worthy of a lengthy car journey for a special occasion. If I lived locally I'd probably pop back, but as it stands (and although I wish them continued success), I don't think I'll be returning.

Edit: I wasn't aware during our visit, but The Merchant's Yard appointed a new Head Chef (Daniel Box) in December 2019. Dan kindly got in touch following our review to explain that on the date of our visit, he was still in the process of taking the reins and transitioning away from the old menu, and that a new menu of his own dishes is now in place. We're now planning to make a return visit later in 2020 to give his food a try.

Unfortunately on this visit, nothing we ate was near two rosette level in my view. Potentially there's still enough here for one rosette, but given the issues with my meal, I don't think I'd award that either if it was up to me.
Group size: 2 adults & 2 children. Total bill: £109.
View full restaurant details for The Merchant's Yard
« The Samuel Fox Country Inn review
Mamucium review »