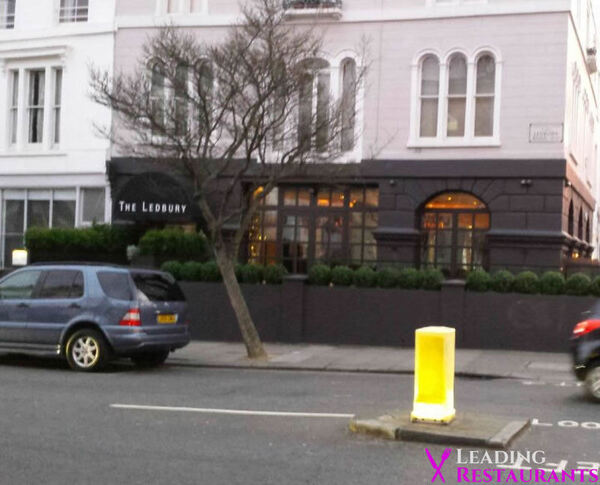 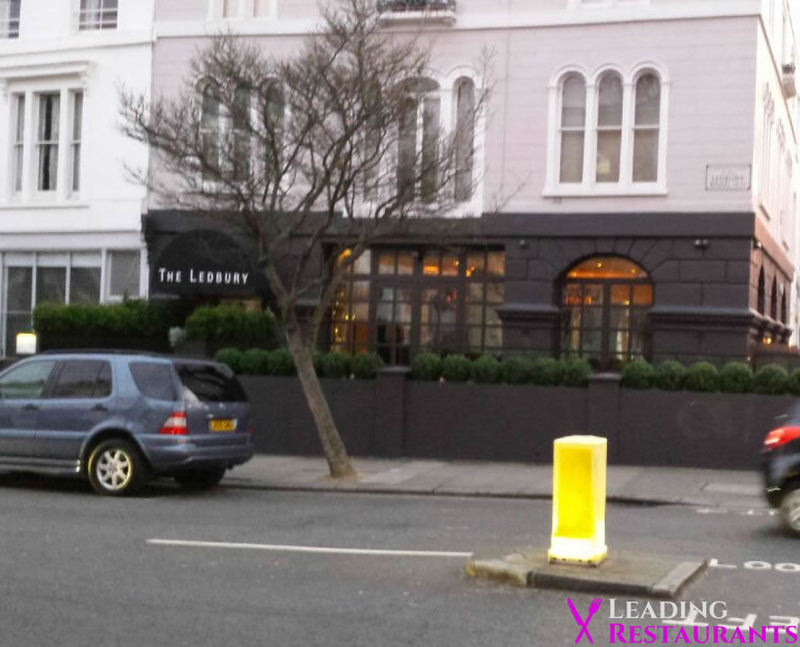 Now in its tenth year, The Ledbury is one of those restaurants everyone just seems to love. Mass critical acclaim appears the standard norm now for Brett Graham's Notting Hill masterpiece; adoration flows endlessly from critics, inspectors, fellow restaurateurs and I suppose most importantly, normal punters too. It won't surprise you then to read that my expectations were high as my wife and I made the short stroll from Westbourne Park station on a Saturday evening for dinner.

The restaurant itself sits on a quiet, mainly residential street, away from any sign of hustle or bustle. The exterior is rather swanky, with plump little hedge balls contributing to an overall look of smart sophistication. As we paused outside to take our customary exterior picture, a passing gentleman asked if we were lost. It was hard not to evoke a supreme sense of self pride as I replied "No, we're going there!". He walked off with a look of "bloody tourists" on his face, but hey, nice of him to ask.

Once inside, the welcome was pleasant, coats were taken and we were shown to our table. We were seated on the back wall in front of some giant mirrors; with hindsight I wouldn't say this is a great spot and the tables either side of us were a bit too close for comfort. Nonetheless, it's quite an impressive and grown up dining room and we settled in hoping for an equally impressive evening of food and drink. I took my usual aperitif of a G&T which was fine; my wife throughout the night had four different non-alcoholic cocktails, all fairly simple but all very enjoyable (too enjoyable for her to let me try any).

It's tasting menu only on a Saturday night (not that I would have had anything else) and after some pleasant enough nibbles, our eight courses began. The first two courses of lobster and mackerel were nice without really blowing me away, which was a surprise as I believe the mackerel has been a feature on the menu for quite some time. The pheasant egg that followed was enjoyable but the cod with white asparagus was definitely the highlight for me of the initial courses; a very nice dish.

At this point I was still waiting for something to make me think "wow" but fortunately that arrived on the very next plate with an absolutely delicious pigeon dish; stunning flavours. My wife also enjoyed hers but sadly on her piece of pigeon, they hadn't bothered to remove a lot of the sinew which naturally made it rather more difficult to eat. It's poor prep from a kitchen of this level; personally I would have happily sent it back but my wife decided it against it; her dish, her choice. The next course of beef however was also excellent and no problems for either of us this time.

Desserts were also good, including a lovely chocolate pave, and the meal finished with some enjoyable petit fours including a very clever gin and tonic flavour stick. The overall menu pacing was a little hit and miss unfortunately; sometimes courses seemed to come slow slow slow, then quick quick quick. However the wine pairings were the surprise of the night; excellent I thought and well delivered each course by a variety of sommeliers.

In fact the service as a whole was outstanding; really couldn't fault it. I enjoyed a decent bit of conversation with a waiter from Bolton who'd previously been at L'Enclume for a substantial period, always good to see a fellow Northerner knocking about. After the meal we were given a kitchen tour; Brett Graham was manically busy as it was mid-service, but we were well looked after by sous chef Sally working on her final weekend. I remember hearing Gordon Ramsay once say you can't run a fine dining kitchen from a basement; it certainly looked a tough environment down there. But despite the searing heat and frenetic pace, they still went that little bit further by providing us with an extra bowl of dessert to munch on while we chatted; a really nice additional touch.

And so, a very enjoyable evening came to an end. We visited The Ledbury with extremely high expectations; I'd read so many reviews stating that it's the best restaurant in London and how it's worthy of the bestowment of three Michelin Stars from our favourite tyre munching inspectors. In all honesty, I don't think either of those two statements is true, but this is nonetheless a spectacular restaurant offering excellent food and truly outstanding service.

No dress code. But smart trousers and an open shirt are sensible for dinner.

Probably avoid the tables on the back wall. Good range of non-alcoholic cocktails.

I have to be honest and say whilst the food is worthy of two Michelin Stars in my opinion, I wouldn't have been supremely shocked if The Ledbury only had one. The Good Food Guide have it about right for me, the AA are a bit harsh.
Group size: 2 adults. Total bill (including service): £381.
View full restaurant details for The Ledbury
« Pollen Street Social review
Greens review »