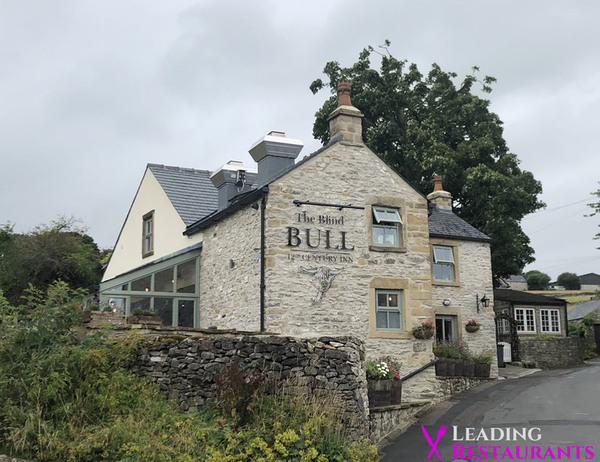 Dating back to the 12th century, The Blind Bull in Little Hucklow near Buxton in the heart of the Peak District is believed to be the fifth oldest pub in Britain (according to the website anyway). After laying dormant for many years, the venue reopened in 2020 after an extensive renovation; the food has received some rather high praise since then, enough indeed to warrant the attention of some major UK restaurant guides. I therefore arrived anticipating a quality meal as I rocked up for lunch with my wife and two young children on a fairly wet August Saturday.

Little Hucklow is a small village with basically a single narrow road running through it, we couldn't see any signage for parking but there were a few spaces next to the pub and fortunately a car was just leaving as we arrived, so we popped our car in there. The exterior of the pub looks very smart and it's clear a lot of effort went into the renovation. The welcome on arrival was warm enough, the place was suitably busy and our waitress did seem to be having a little bit of difficulty finding our table on the system to the point where I was mildly concerned they were going to try and seat us outside, despite it raining.

Fortunately, that didn't happen and we were shown to our table in the upstairs part of the pub. The inside has been smartly finished also with a lot of historic touches such as very old looking exposed beams, but it still feels contemporary. On offer at lunch is a carte menu with some additional sharing specials; there's no children's menu but our waitress did let us know they can offer half portions of certain dishes. She also let us know there was only one portion of fish and chips remaining which was a little bit surprising to hear; it's a while since I've been to a venue that's run out of food at lunch.

There's a decent wine list too with a solid selection, but no drinks list which would have been helpful. Although there were water glasses on the table we weren't offered any water which I found a tad strange. I had a couple of my usual Hendricks and tonics during the meal which were OK (albeit served with lemon), my wife just had lemonade and my daughter and son were happy enough with apple juice.

There was no option of bread to start as I'd hoped, so lunch began for me with the raw beef, served with smoked broccoli puree and pickled chillies. It was a strong dish and the highlight of the meal for me; the flavours were good and as a whole the plate ate well. My wife had a bit less luck with her Kedgeree scotch egg; it was an OK dish which showed some technical skill, but the flavours were a little bit dull in truth. My daughter had the fish and chips which they were happy to bring with the starters; we'd asked for a half portion (as our waitress had offered) and to hold the curry sauce; it arrived with curry sauce but in fairness all the sauces were served in their own little bowls so it wasn't an issue. As fish and chips go it was very good though; all the elements were cooked well and perfectly tasty. My young son just had a side order of those same tasty chips which he happily munched through also.

Then came... a wait. A long, long wait. Both my and my wife's starters were cleared, but as we sat in expectation of our mains arriving, nothing did. Even after the kids had finished their food a good time later and their plates too had been cleared, we were still left waiting. We did manage to order some more drinks during the wait which led to a little bit of drama when our waitress arrived with said drinks and duly knocked a bottle of tonic over on her tray and over my young son. He wasn't too impressed but it was less than half a bottle so no harm done really. I did feel for our waitress as she was visibly shaking whilst wiping it up; she did offer to replace the tonic of course but there was enough left in the bottle for me, so I politely declined.

Eventually our main courses arrived but unfortunately, they weren't worth the wait. I'd gone for the pork fat poached plaice, served with peas, mussels and a borage sauce. I've got to be really honest here, it was a very underwhelming dish. The cooking of the fish was OK (although it was a tad under in places if I'm being really pernickety) but it was served with unpleasantly hard peas and a sauce that lacked any kind of body or depth of flavour. At least I couldn't fault the new potatoes on the side though, they were nice. My wife had slightly better luck with her roast duck served with a duck croquette as well as chard and cherries; the duck cooking was fine but the dish as a whole was very heavy on the salt and again the sauce wasn't particularly pleasant. It's fair to say we'd been expecting quite a lot more from the main courses here.

Nonetheless, we pushed ahead and ordered desserts and this time the food arrived in a reasonable timeframe. I went for the lemon posset served with shortbread and yoghurt sorbet. The lemon posset itself was delicious but what this dish lacked more than anything was finesse; it was haphazardly dumped in a little bowl and looked more like a children's dessert than an adult carte dish. I thought the portion size was rather mean for a carte dessert too. With no children's desserts offered, my wife and daughter both had the Eton mess which was presented with a bit more thought and also had some tasty elements.

And so, a less than stellar meal came to an end. When paying the bill I noticed we'd received a discount for 'Management Goodwill' of a peculiarly precise £5.23; I wasn't sure if that was supposed to be for the smaller portion of fish and chips my daughter had (she'd been charged the full adult price otherwise) or due to the earlier tonic bottle spillage, but either way, it wasn't explained. And by this point, given the time we'd spent waiting around for food already, I really couldn't be bothered to ask.

Overall, this is clearly a nice venue with a lot of potential, and hey, the toilets were decent too (complete with rolled up hand towels). But whilst the service throughout was warm and friendly, it was also less than attentive, and there were some serious pacing issues too with the delivery of the main courses. But the biggest problem for me was the food itself; whilst there were definitely some elements of good cooking on show, the meal as a whole was way below the standard I'd been expecting. Yes of course, it's still a level up from bog standard pub grub and maybe my expectations were a bit high based on what I'd read before coming, but there's a lot of room for improvement in the dishes being served here, particularly given the cost of the meal.

Maybe it was just a bad day in the kitchen, maybe (as I've seen before) a good run of early feedback has led to some complacency, but either way, although I genuinely wish them all the best going forwards, and as lovely as the venue and location is, I don't think I'll be heading back to eat here any time soon.

Child friendly on the surface, but there's been very little thought around food options for young children. Dog friendly also with dogs both downstairs and upstairs during our visit. Not a lot of parking.

I've had worse meals at Michelin Plate awarded restaurants in the past so it wouldn't surprise me to see one bestowed here, but for me, the food wasn't worthy of an entry in any of the major guides.
Group size: 2 adults & 2 children. Total bill: £107.
View full restaurant details for The Blind Bull
« The Punch Bowl Inn review
Hispi review »