Simon Radley at The Chester Grosvenor 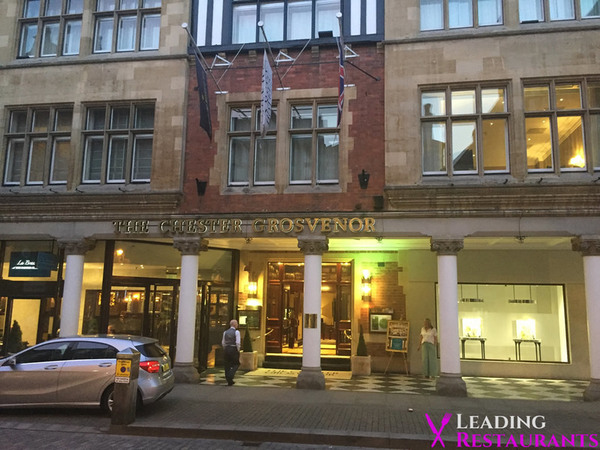 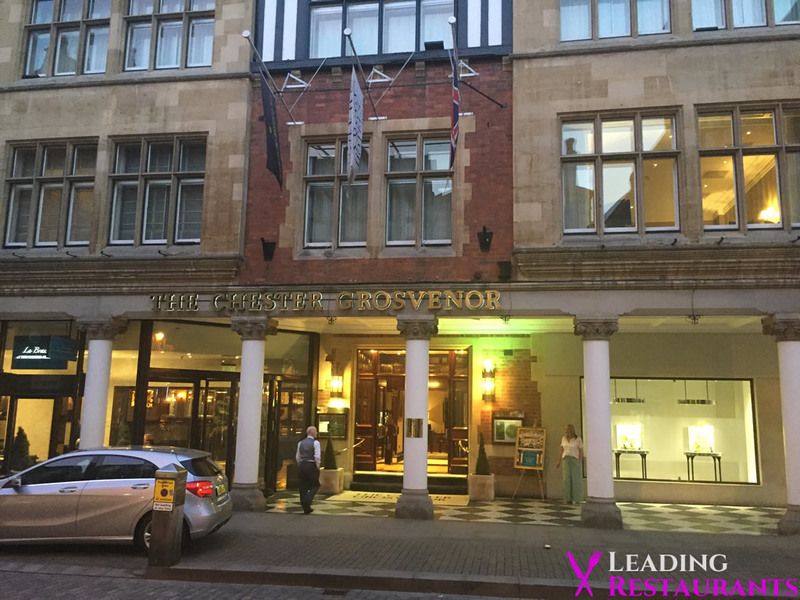 Having held a precious star from our favourite tyre munching inspectors since 1990, as well as consistently favourable write ups in the other major guides, I was pretty confident of a good quality meal as I ventured to Simon Radley at The Chester Grosvenor for dinner on a sunny Thursday evening in May.

Situated within walking distance of several pay & display car parks, the hotel sits just next to the Eastgate Clock in Chester which is apparently the second most photographed clock in the UK (fun fact for you there). We were a little early for our reservation and the very friendly gentleman on the front door directed us to the bar area where we were greeted and seated with some olives and nuts to have a little aperitif and peruse the menus.

It was clear that right from this very first interaction, a great deal of emphasis is placed on good service here. As for the aperitifs themselves, there's an extensive gin list and I was able to enjoy a nice G&T, but it was also a relief to see a decent selection of four non-alcoholic cocktails for my wife which she sampled throughout the evening and on the whole, very much enjoyed. The menu choices revolve around either the tasting menu or the carte; as usual we opted for the tasting menu. One thing I did find refreshing is that although the tasting menu is £99 on a Friday or Saturday, Tuesday to Thursday this reduces to £69 for exactly the same menu, a great way to get more mid-week trade and indeed although the place wasn't packed, the restaurant was fairly busy for our visit which was reassuring.

There's a good wine list available but one thing I disliked slightly was the rather overly zealous recommendation of the wine flight if we opted for the tasting menu. It was always my intention to take it with my meal and I didn't really appreciate the amount it was pushed. But that's a pretty minor complaint; in general the initial service was top class and it wasn't long before we were shown through to the dining room, a fairly traditional but perfectly welcoming space.

After some good cracker-based nibbles, the famed bread trolley was wheeled out with nine different bread choices, I did feel a bit for the poor waiter who had to push it around but we had a little joke about it, there's not a massive level of formality here as you might fear. We sampled three or four different types which were all excellent and the butter was good too; I always prefer to see bread served right at the start of the meal rather than a few courses in so it was pleasing to see that enacted here.

First up from the tasting menu was an egg amuse bouche served on a "nest"; whilst not particularly memorable, it was a decent start to the meal. The seared yellowfin tuna that followed however was excellent, with a lovely coconut miso sauce. We were warned in advance the tuna was served pink (as it absolutely should be) however I think that warning must have been necessitated from experience and we did indeed overhear one table requesting they'd like it cooked more despite the protestations of the waiter, a shame but such is life I guess.

Next came a decent asparagus dish (tis the season); this was tasty although texturally, the little asparagus cake-like layer at the bottom was a little too squishy and watery for me. Things improved though with a very good veal, potato and mushroom dish (complete with a lovely cheesy sauce) and then some beautifully cooked Iberico pork, accompanied by (one piece of) flavour packed chorizo. It was an excellent main course which both my wife and I thoroughly enjoyed.

After a slightly uninspired beetroot and goats curd dish and an enjoyable apricot and prosecco pre-dessert, last up was a splendid plate consisting of a delightfully moist Jamaica cake and a delicious chocolate mousse, it was genuinely one of the best tasting menu desserts I've had in quite some time, absolutely top class.

The wine pairings throughout were good and delivered reasonably well by a couple of different sommeliers, however what did irk me was that all the wines were measured away from the table and brought over in a carafe. For this standard of restaurant where there's such a clear emphasis on service, I really feel the wines should be poured at the table. I didn't even get to see the bottle for any of the wines I drank, it makes a massive difference to the experience and it was such a shame they've opted for this approach. I suspect it's rooted in ensuring every guest receives exactly the same amount of wine, but does that really matter?

Service aside from that niggle with the wine pouring was generally very good, not too formal however at some points it was mildly patronising, one waiter in particular remarking more than once how pleased he was we'd cleared our plates in such a short space of time. I'm sure he was just trying to be nice but he could do with some lessons in tact.

We opted to take coffee at the table; there was a gentle push to move back to the bar lounge area but I thought I'd stand firm on this one and it wasn't an issue. This was accompanied by ricotta cheese cannelloni style petit fours, which were OK if not spectacular, however we were also treated to some chocolate cigars which although far from the best p4's I've experienced, were pretty tasty. I also had a Longrow whiskey from the impressive whiskey list and following a bit of an extended wait for the bill, our meal came to an end.

Overall, this was a very enjoyable evening. Whilst I wasn't expecting food at the cutting edge of culinary endeavour (and nor did I receive that), rest assured that there is still some top quality contemporary cooking on display here. When you combine that with some (generally) top class service, it does make for a splendid overall experience and one I'd be very happy to repeat in future.

It's smart, but no need for a jacket or tie. I went with an open shirt and smart trousers which seemed about right, although I did see some jeans and indeed one guy rocked up in a polo shirt, so I don't think there's too much of a dress code enforced here in reality.

Tasting menu is considerably cheaper Tuesday - Thursday. Several pay & display car parks near by if you don't fancy parking at the one next to the hotel. Decent non-alcoholic drinks selection.

The food was absolutely worthy of a Michelin star for me; this isn't a case of them retaining just due to history. As an overall experience, I can see why the AA have gone for four rosettes and having thought about it a fair bit, I agree the food was at four rosette level.
Group size: 2 adults. Total bill (including service): £306.
View full restaurant details for Simon Radley at The Chester Grosvenor
« Restaurant One Eighty at the Best Western Plus Pinewood on Wilmslow review
20 Stories review »