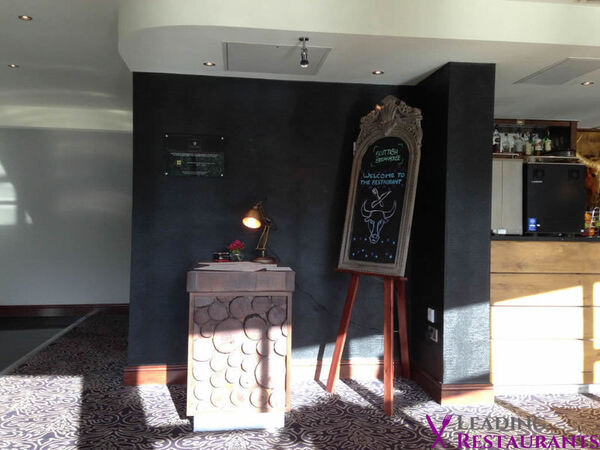 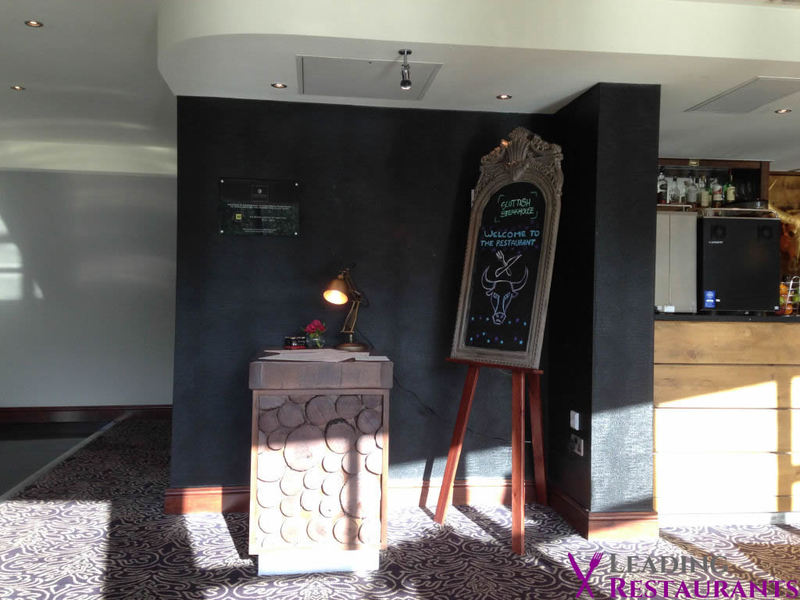 There are some hotel chains that tend do very well in the AA Guide; Macdonald are certainly one of those chains, with over twenty of their hotel restaurants currently holding rosettes. Not that I'm suggesting anything at all untoward, just that they clearly place value on offering a good on site restaurant ... and making sure the AA know about it! Scottish Steakhouse at the Macdonald Manchester Hotel is one of a few of their restaurants which now follow a steakhouse theme and as a lover of steak, I was looking forward to an enjoyable meal as I visited with my wife and young daughter for dinner on a Wednesday evening.

The hotel was fully revamped a few years ago and still feels quite modern. There's no dedicated entrance for the restaurant but it wasn't difficult to find; right at reception, past the ground floor bar and up the stairs through a curious padded door (part of the steak theme I think). We were a little early for our reservation before the restaurant opened, so were seated in a bit of a lounge area next to the restaurant bar. Despite sitting there for more than fifteen minutes, no one offered us a drink, there was even a gentleman at the bar doing his best to ignore us, a bit strange I thought.

We were then taken through to our table in the main restaurant area, it's a decent space with an open kitchen and although the view isn't much to write home about, the floor-to-ceiling windows are quite impressive. As we sat on our table, I was expecting a waiter to come and ask us what we'd like to drink, as is pretty customary in restaurants since say, oh I don't know, the beginning of time. But no, it wasn't until they came to take the food order that I got the opportunity to tell the waiter we really would appreciate a drink too. With 25ml of Hendricks gin coming it at a whopping £5.10 (wouldn't have had a double if I'd known), you'd think they'd be making some effort to give customers a glass of something at some point in the evening.

The menu is steak focused as you'd expect, but does offer a good range of other options including a full children's section. Food began with one of the specials for the day; a pork belly and black pudding starter. Two of my favourite things anyway, but it was a very nicely put together dish and he highlight of the meal for me. Next up was my sirloin steak; I'd asked (as always) for it to be cooked medium-rare and although it was a little too much on the rare side, it was still nice enough. The accompanying chips lacked crispness, however the bearnaise sauce was a decent effort and quite enjoyable.

By this point our glasses, from the earlier drinks we'd fought so hard to be served, were empty. Given the waiting staff were now fully aware of my ability to pay hugely over-inflated prices for drinks, surely they'd now take it upon themselves to ask if we'd like more? Absolutely not. The glasses just sat there empty for the rest of the meal, much to the relief I suppose of my bank manager. Very, very strange indeed.

My wife and I finished with the mystery dessert platter from the specials board; this was basically mini versions of all the desserts on the menu and took an absolute age to come out (over twenty-five minutes). Elements included an unspectacular brownie, a decent chocolate and almond tart, cranachan and shortbread. It was tasty enough but I would say a bit on the large side for two people.

And so our visit came to an end. Overall, this is a decent child friendly restaurant and there are certainly far worse places you could eat in Manchester. I'd personally expect a slightly higher level of food and service given the prices charged, but nonetheless it was an enjoyable visit and not one I'd be too upset at repeating in the future.

None, although a number of people had made an effort for dinner so make of that what you will.

I think the food here is worthy of an AA rosette, but I don't think there's enough substance on display to interest the other guides.
Group size: 2 adults & 1 child. Total bill (including service): £113.
View full restaurant details for Scottish Steakhouse at the Macdonald Manchester Hotel
« 63 Degrees review
The Cross at Kenilworth review »