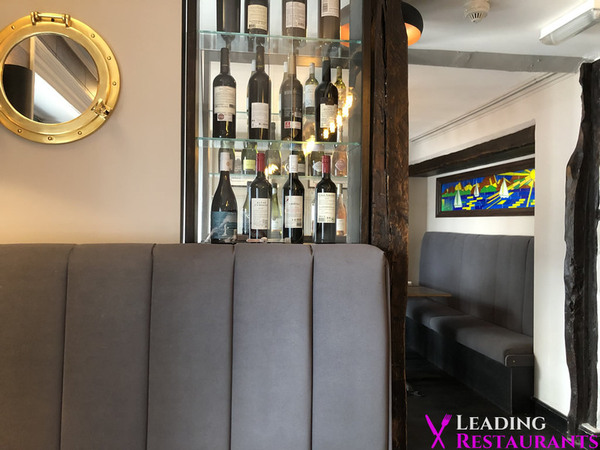 Whilst on holiday in The Lakes and staying again in one of my favourite places, the tourist hotspot of Bowness-on-Windermere, I wanted to enjoy a quality lunch with the family within walking distance of our hotel, but where to go? One search on this very site (it's a very handy site you know) brought me to Porto, a child friendly fine dining restaurant and long time holder of an AA rosette (and indeed a brief flirt with two rosettes in 2017-2018). I duly rocked up with my wife and two young children for lunch on a sunny June Tuesday, with the palpable hope of eating some quality food.

The restaurant was fairly quiet at first but filled up nicely during lunch; on our arrival we were shown to our table not far from the entrance on the ground floor. The dining room has a nice clean modern feel and was a perfectly comfortable place to enjoy a good meal.

The wine/drinks list is concise but covers the main bases adequately; I had a couple of decent Lakes gin and tonics during my meal, the kids had apple juice and my wife was happy enough with her elderflower presse. She did originally ask for a raspberry lemonade but our waitress informed us they'd run out of that unfortunately, never a great look when that happens, but such is life.

On offer at lunch is a full carte menu alongside some lighter sandwich/salad options, and there's a proper children's menu also with a decent amount of choice for younger kids, albeit only across two courses (no starters).

Lunch for me began with the scallops, served with a lovely wasabi cream cheese, pomegranates and some crispy ham also. It was a delicious plate overall, the scallops were nicely cooked and the flavour combinations worked well, my only minor complaint is the scallops were rather small for an £11.50 starter. My wife opted for the fried chicken livers which again were very tasty, this time though the combination with a waffle didn't work quite as well. My daughter chose the chicken goujons with chips and peas from the children's menu which she munched through very happily, whilst there was no issue bringing just a portion of chips for my young son.

For mains, I chose the lamp chump, and again it was another very impressive dish. The lamb was perfectly cooked and accompanied by some crispy sweetbread, carrot, celeriac, a flavoursome lamb jus and a beautifully layered slice of Dauphinoise potato. Sure, this dish wasn't anything revolutionary, but it was an accomplished and pretty faultless piece of cooking. My wife had the wild mushroom risotto which was a bit less exciting but still very tasty (I tried some also); another thoroughly decent plate of food.

The menu pacing up to this point had been fine, but the delivery of the desserts did seem to cause some issues. First my wife and young son's dessert were delivered, then about a minute later my daughter's, but then it was around five minutes before my dessert arrived, and with no apology from the waitress either. Yes, the restaurant was busier by this point but serving a table of four dessert at the same time shouldn't present an issue to a kitchen of this standard.

When it did arrive, it was just about worth the wait. My lemon creme brulee was delicious, albeit the accompanying shortbread was a bit lacklustre. My wife had the sticky toffee pudding which was very tasty also, and both the kids devoured with glee their two scoops each of strawberry sorbet. One additional minor niggle is that the sorbet was listed on the children's menu as £3 for two scoops but I was charged the carte price of £4 for both kids. Yes, it's only two pounds and I didn't even notice until I came to write this review, but it's just another little service niggle that wasn't quite right.

And so, a very enjoyable lunch came to an end. I'll be perfectly honest and say I wasn't expecting the food to be as good as it was in a tourist hotspot restaurant on a Tuesday lunchtime, but the cooking throughout was of a high standard. Yes, there were some niggles with the service which was unfortunate and yes, my wife's dishes weren't perhaps quite as good as mine, but I would very happily eat here again at any point in future and I'd be fully confident of receiving a very fine meal.

None, but I'd probably dress up a little for dinner.

Definitely worthy of an AA rosette, in fact I wouldn't be at all surprised to see a return to two rosettes at some point. I also think it's worthy of a mention in the Michelin guide.
Group size: 2 adults & 2 children. Total bill: £114.
View full restaurant details for Porto
« Rogan and Co review
Kysty review »