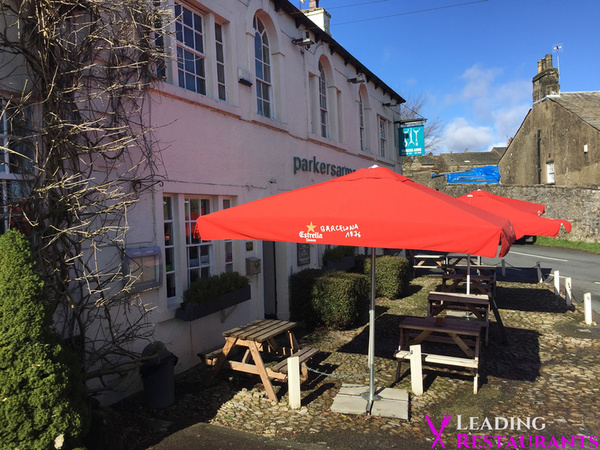 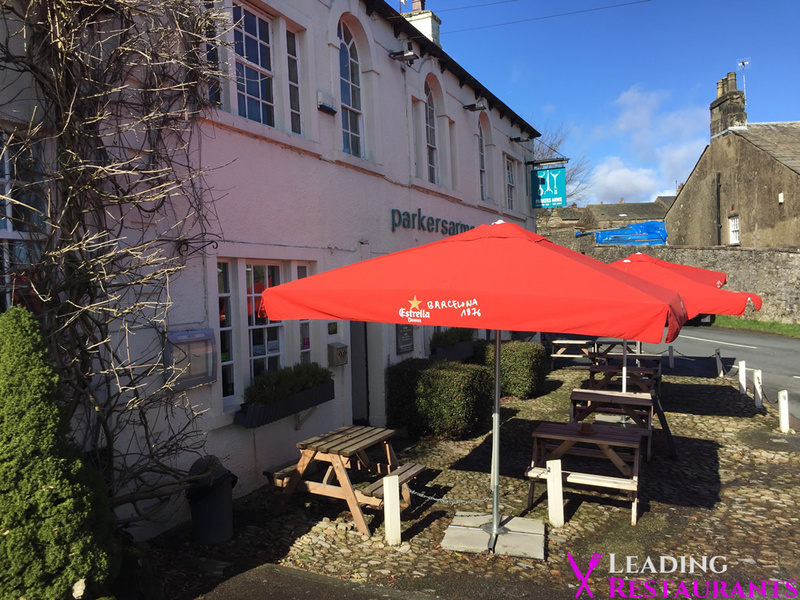 Situated in the Ribble Valley district of Lancashire, the Parkers Arms is pub with a considerable reputation for serving good food. As a regular fixture in various "top gastropubs" lists, and a holder of an AA rosette, I was reasonably expectant (despite some rather inconsistent Tripadvisor reviews) of a decent meal as I visited with my wife, young daughter and baby son on a sunny March Saturday for lunch.

The pub sits in a very pleasant spot in a nice village and wasn't too difficult to find with the help of our trusty sat-nav. There's a decent sized car park on site and although this was pretty empty when we arrived, it had filled up considerably by the time we left. Due to an A-road accident on the way up, we were five minutes late for our 12:30 reservation but the welcome on arrival from the waiter was fine and we were shown to our table in the window, complete with high chair already set up as requested (usually a good sign). The inside is a nice space; it's not immaculately finished like many of the leading pub-cum-restaurants we've visited (I did notice a heck of a lot of dust on the mirror overhanging the roaring fireplace), but it's a pleasant enough environment to enjoy some decent food and a pint.

There's plenty of choice drinks wise; I enjoyed a couple of Burnley Batch G&T's during the meal, and although my wife and daughter stuck with apple juice, I did even spy a non-alcoholic cocktail on the menu alongside some other slightly more extravagant alcoholic creations you wouldn't expect to find in a standard pub. The food menu in truth was mildly confusing, and I felt a bit for our waiter trying to explain it. Carte dishes are priced individually, but there's also three courses for £30 (plus various supplements). On top of this, we visited during national pie week which allowed two people to have three courses each for £50. We opted for this but in order to "put it through the till", we had to give our dessert choices up front as well, which I felt was a bit unusual. There's also a selection of not-on-the-menu kids meal choices also which is always a plus when you're eating with young children.

Lunch began for me with the beetroot cured salmon; it was actually a really nice dish for a summery day and the highlight of the meal for me. Accompanying my slice of salmon was a nice chunk of crisped up skin and a tasty little pile of potato salad. My wife's carrot and onion fritters were a bit more agricultural on the presentation side, but nicely spiced and enjoyable also. Unfortunately, both the kid's meals were pretty poor. My daughter opted for sausages and chips, the sausages were bland and flavourless and the promised "pizza" for my son actually turned out to be cheese and tomato sauce on bread. The accompanying chips were fine but we were pretty disappointed with the standard of both children's meals.

Then came a little bit of drama. My wife had opted for the pheasant pie for her main; not too long after the starters had been cleared, the gentleman manager appeared and informed us that they had cooked a curried lamb pie by mistake because they "all look the same" and we could either have that, or wait for what we actually ordered. My wife isn't a big curry fan, so even though she probably would have succumbed and said yes if I wasn't there, I stepped in and said we'd hang on thank you very much. What I found weird was there was no offer whatsoever to take it off the bill, give us a free drink etc; if you make an error like that and are expecting the customer to live with it, it's pretty customary to offer something in return. But not here.

I think we made the right choice to wait though as when it did arrive, my wife's pheasant pie was delicious, accompanied by a lovely rich mushroom sauce. My game pie in truth wasn't as good, perfectly edible but unfortunately not packing the same level of flavour. It came with no sauce which was a shame as it definitely would have benefited from one. I had chips with my pie which were OK; my wife went for the creamy mash which is probably the better choice. When the plates for mains were cleared, the manager did mention something in jest about how if my wife "had wanted curried lamb" she'd "have ordered curried lamb"; it was friendly enough but the passive-aggressive undertones were pretty evident.

We'd already had to select our desserts at the start of the meal and these duly arrived shortly afterwards. My chocolate tart was pleasant in itself, but any flavour was completely annihilated by the sour cream dollop on top of it, which was a shame. It was still better however than my wife's 'Basque style' cheesecake which was a pretty dire piece of work; it was edible but there's literally nothing positive I can say about it. The listed carte menu price for the cheesecake is £12 which is positively obscene considering the quality of the dish. At least we got a dessert on a plate however; they hadn't thought to come and check if my daughter would like dessert (given we hadn't ordered hers at the start of the meal) and when I was eventually able to get some service and order her something, she was presented with some rock-solid ice cream in its original cardboard tub.

I genuinely cannot recall an occasion in the past where a children's dessert wasn't at least served in a bowl. Unfortunately, it's completely reflective of the really poor standard of kids meals we received and such a shame; it's great to be child friendly in principle, but that has to follow through to serving them half decent food too, you can't just stick out any old tosh just because they're too young to complain.

And so, a fairly disappointing meal came to an end. Overall, although there was some good cooking in there, the food was not of the standard I'd been hoping for, with desserts being a particularly spectacular let down. Service in truth was poor also, friendly but disjointed and even trying to flag someone down just to order more drinks proved a lot more difficult than it should have been. Value wise, I was happy enough with the two meals for £50 offer, but if I'd had to pay the full carte prices from the menu, I'd have been positively fuming. I'm glad we gave the place a try and I wish them lots of success in the future, but I think it's unlikely we'll make the trip again.

There's just about enough here to warrant a rosette in my opinion, if you get reasonably lucky with your menu choices. I can understand though why Michelin aren't really interested.
Group size: 2 adults & 2 children. Total bill: £88.
View full restaurant details for Parkers Arms
« Mana review
The Angel at Hetton review »