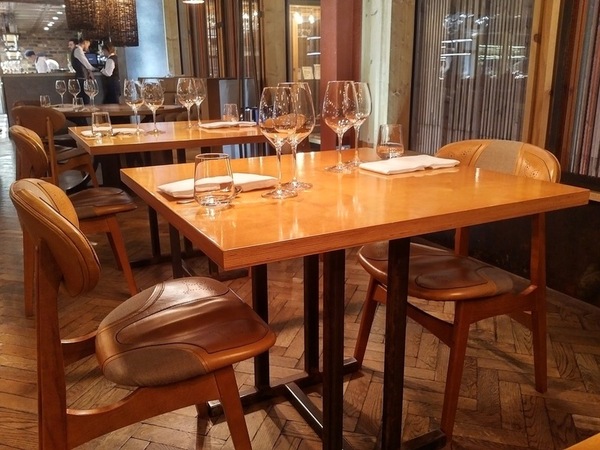 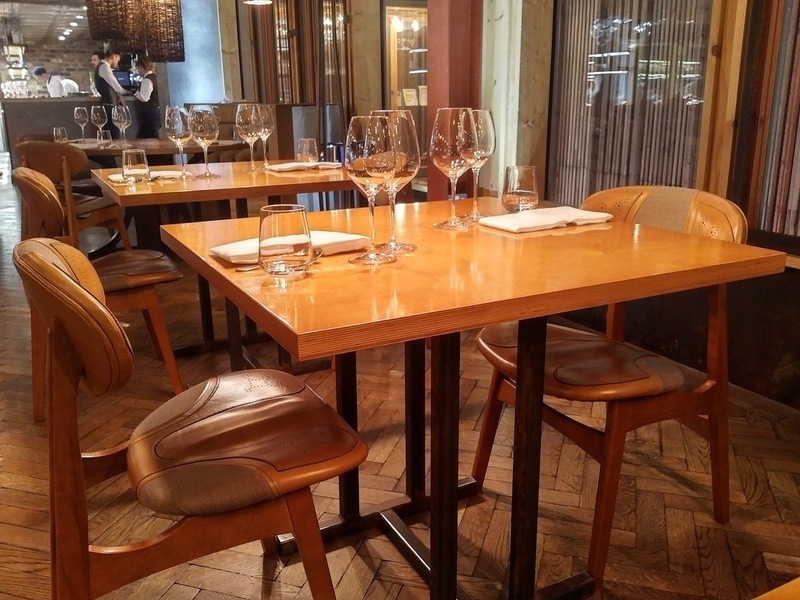 Sometimes change can be a very good thing. Although I thoroughly enjoyed my last visit to Manchester House, there's often been a general feeling since (in various write ups) that the place wasn't quite fulfilling its potential. With Aiden Byrne having moved onto other pastures, Nathanial Tofan now fully at the helm and a brand new menu to enjoy, the opening day of 2018 service seemed an ideal time to revisit for lunch. And handily launch day fell on my wife's birthday, win win.

We arrived a little early for our reservation and were shown up to the twelfth-floor bar for a quick drink. With it being midday, it was quiet and the service perfectly attentive, although I was asked more than once what name the reservation was under. Slightly amateurish yes, but given it was the first day back, it's a small discretion I can easily forgive. After around twenty minutes, we were taken down in the lift and seated in the restaurant. It was very much as I remembered, still a modern industrial vibe but a perfectly pleasant place to enjoy a meal.

We were presented with four different menu options; two tasting menus (eight or twelve courses), a lunch menu or the carte. I always find it very reassuring when a kitchen is confident enough to offer all its menus for a weekday lunch, it's amazing really how many places don't. Of course, it had to be the twelve courses for us and indeed we were reliably informed we were the first paying customers of 2018 to try the new menu, exciting stuff. I opted for the wine pairings as well; my wife doesn't drink and although on our last visit they had fantastically managed to rustle up a non-alcoholic version of the drinks flight, alas, they weren't able to manage that this time (I did ask). However, they do offer a pretty decent selection of non-alcoholic mocktails so it's hard to be too critical.

And so lunch began; after some decent sourdough bread came the first eat-with-your-hands courses of a foie gras and pistachio sandwich (delicious), a lovely, fishy dish of salmon and assorted friends on a cracker and finally raw beef with coal oil and egg yolk inside an (as the waiter was at pains to tell me) authentically made taco. This I had a little bit of an issue with as although tasty enough, having eaten some stunning beef tartare dishes in the last couple of years, it did feel slightly wrong to whack such good ingredients in a rather boring taco shell. But that's just personal preference, it still tasted good and I'd expect it's the kind of little bite most customers would very much enjoy.

At this point I was feeling reasonably good about the meal, but things seriously went up a notch as we got into the main event. A very accomplished crab dish was followed by stunning plates of Iberico pork and scallop with lovage, both absolutely delicious. An indulgent dish of oyster and caviar followed (complete with a little bit of welcome dry ice smoke theatre) and then another delicious plate with a superb sirloin (with sweetbreads and onion) dish. It was relatively simply presented, nothing complicated, but the flavours were top draw and the meat (including a lovely little chunk of fat) was cooked to absolute perfection.

The dessert courses were next and after a perfectly edible (although not particularly inspiring) blackberry and goat's curd dish came a beautiful apple and calvados white cube, complete with gold leaf, really enjoyed that one. Last up was the sea buckthorn, a delicious block of orangey creamy goodness accompanied by yoghurt and a sugar shard. I have to say my wife wasn't so keen on that one but I thought it was an excellent dessert.

The meal finished with some decent coffee and tasty petit fours; a fitting end to what was truly an outstanding meal. Service throughout was good and the wine pairings were well thought out, however the delivery could be improved (although hard to be too critical on the first service of a new menu). Although there were one or two longer-than-there-should-have-been waits, the menu pacing was generally pretty sound too. One thing I found a minor niggle was that although various people congratulated my wife for her birthday, there was no birthday plate or similar, but there's plenty of restaurants that don't bother with those kind of things anymore (sadly).

Overall, this really was an outstanding meal that we both thoroughly enjoyed. The place seems to have a renewed energy and the food, although brilliant, really doesn't feel like it's come from the hands of a chef chasing awards. Having said that, if our favourite tyre munching inspectors pop along, eat what I ate and don't award a star, something is seriously wrong with the world as the food here is substantially better than many other starred venues I've eaten in. Time, as they say, will tell on that one.

None that I could see; I went with an open shirt and jeans which seemed about right, but there were people in t shirts so anything goes I think.

Give the tasting menu a try.

If it really, really, really is 'only about the food', our favourite tyre munching inspectors have nowhere to hide as what's being served here is unquestionably worthy of a star in my humble opinion.
Group size: 2 adults. Total bill (including service): £321.
View full restaurant details for Manchester House
« Murano review
The Merchant's Yard review »