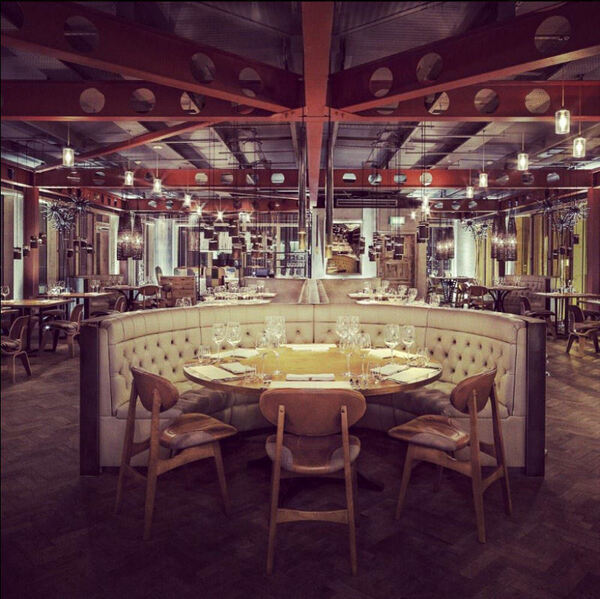 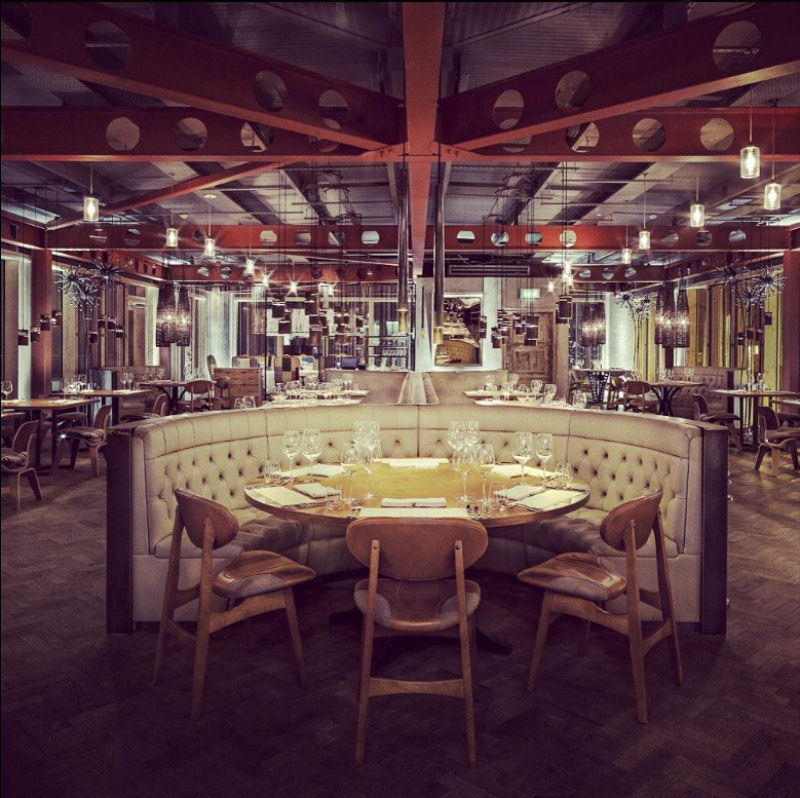 Amidst the furore of television documentaries and largely irrelevant pen pushers declaring Manchester as finally "ready for fine dining" (presumably the inhabitants ate without cutlery prior), it would be easy to dismiss Manchester House as a plastic-populated passing fad. However to do so would be an error of incomprehensible magnitude as what's been created here, by any standard, is a spectacular restaurant.

Entering the restaurant floor, I'm greeted, well first by a very lovely hostess, but then by an even more beautiful expanse of what I can only describe as industrial serenity. Walking to our table we pass the rather large and splendid open kitchen, with Aiden Byrne diligently preparing for what would be another fully packed service. The smile on my wife's face said it all; this place just feels great.

It would be remiss of me not to mention the generous table spacing and majestic toilets, but what impressed us even more was the service. I'm a fairly conventional guy and I'll invariably take wine pairings with any tasting menu, however my good wife doesn't drink. I'd seen prior to our visit they offered a drinks flight alongside the wine flight, could they possibly go off-piste and offer a non-alcoholic version? There are very few top end restaurants where I'd even bother asking the question, such is the normal thinly disguised disdain towards those who doth dare choose not to become inebriated. I mean, if there's one non-alcoholic cocktail on the menu, who could possibly desire more than that?

Manchester House is different. I felt optimistic here our wishes could be fulfilled and low and behold, after a short discussion with the bar staff our waiter Sam joyously declared they could provide a full drinks flight without any alcohol. So happy was my wife that I didn't even care when the bill arrived and they'd charged me exactly the same sum as the drinks flight normally cost. No really, I flinched a little, but I was fine!

Of course, despite a wonderful drinks flight, a fairly decent wine flight and memorable service, the main reason we were there was the food. On the whole, this matched the dizzying heights I now expected. The initial four courses, including an intense hazelnut mousse with foie gras, built steadily to the star of the show, the confit pigeon with spiced cherry. This was by far the best dish of the night and indeed one of my favourites dishes of 2014, absolutely delicious.

Unfortunately things did then start to go a little awry. Snail and salmon courses were disappointing and after maintaining a decent pace of delivery for the first two-thirds of the meal, our sea bass course which came next took an eternity to arrive. The sea bass was good; however the veal and pea dish that followed was not; just a pretty bowl of nothingness if I'm honest. Dessert however was a vast improvement; the apple and eucalyptus sorbet was really quite a magnificent piece of flavour management and the strawberry based dish consisting of ewe's milk ice cream and panna cotta was a perfectly palatable plate of food.

Looking back on the meal as a whole, some of the dishes did feel a little untested. In so many leading restaurants that Manchester House aspires to emulate there's dedicated development kitchens and tasting benches; in general it takes a long time to get something new on the menu. Here it feels like they could think of a dish in the morning, knock up a version whilst munching on some muesli for breakfast and be charging customers £170 per head (tasting menu and wine flight) to guinea pig it for them in the evening. Whilst this does add an air of excitement, it's difficult to see how such an approach could ever yield the awards the restaurant so desperately seeks.

Nonetheless, it's testament to the genuine talent that inhabits the kitchen here that I left that evening with a very positive impression of the food overall. Some of the dishes were absolutely top class pieces of cooking and when combined with the service and spectacular venue, I'd defy anyone with working taste buds to depart without a smile on their face.

And all this on a Wednesday evening in the land that fine dining forgot. Who'd have thunk it?

Nice shirt with jeans for me, seemed pretty standard. Some guys in jackets, one or two late night hipster arrivals in t-shirts.

If you're a non-drinker, you really can't go wrong here so don't be afraid to ask.

I think both the AA and Michelin have this right; it's everything a three AA Rosette restaurant should be but not quite worthy of a Michelin Star yet based on my visit. The Good Food Guide have it wrong; considering some of the sleep inducing dross in the 2015 guide deemed worthy of a five, to award only a four in this instance beggars belief.
Group size: 2 adults. Total bill (including service): £360.
View full restaurant details for Manchester House
« Gilgamesh review
Earle by Simon Rimmer review »