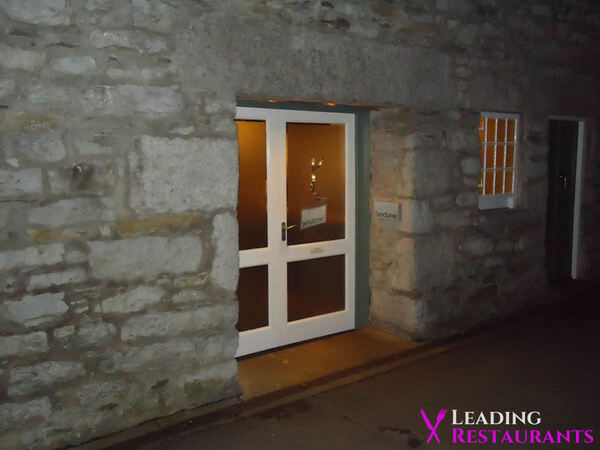 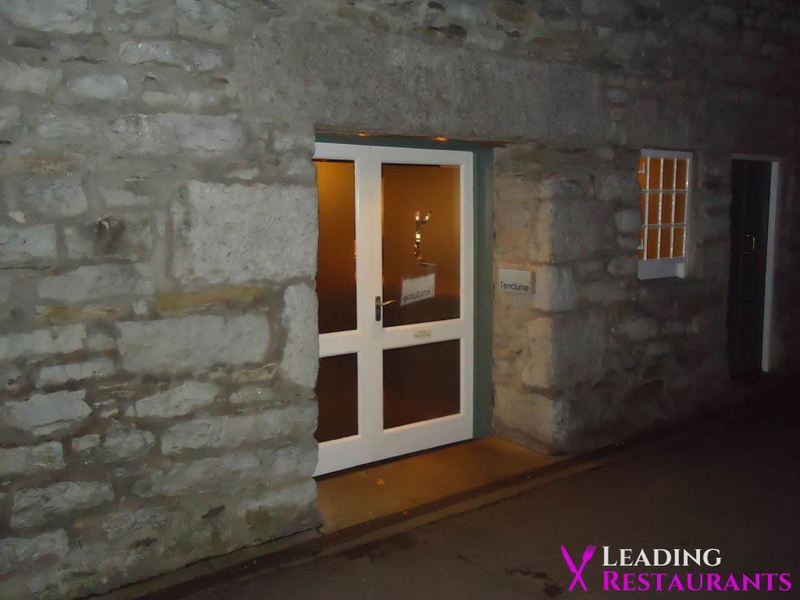 Ah, L'Enclume. It's French for "the anvil" don't you know. Nestled seamlessly into the quaint village of Cartmel, Simon Rogan's flagship restaurant might not come with much of a view, but it does come with one hell of a reputation for serving outstanding food.

My journey began with some fastidious car park planning (see, you don't get this kind of insight in your broadsheet supplement). I'd realised in advance there isn't a great deal space around the narrow streets near the restaurant to leave a car; fortunately there is a huge car park available a short walk away at Cartmel Racecourse, it's even free after 6pm. Problem solved.

After a pleasant evening walk we entered via the unimposing door to be greeted warmly by Sam, a thoroughly nice chap who I suppose you would class as the maitre d (although I do hate that term sometimes). Two thoughts immediately jumped into my simpleton brain. Firstly, the restaurant has a great feel with whitewashed walls, stone floors and all the other eminent reminders that you're in the glorious Lake District. My second thought was more of a "by 'eck, they haven't half crammed a lot of tables in". It's by no means a sardine tin and I've been to plenty of restaurants with less space, but it's noticeable.

My wife and I were fortunately seated in the corner of the conservatory which I would say was one of the better spots. Just off the conservatory in the main restaurant area there's a close group of tables which form a single file corridor of damnation; this is the only route to the bar and toilets and all night was constantly flowing with guests and waiters. It would absolutely do my nut if I was sat there but fate dealt us a kind hand that evening. Lucky me.

My aperitif was my usual choice of a G&T, and a very fine one it was too. My wife of course is oh so much more complicated; she has the audacity not to drink alcoholic beverages. However, this wasn't greeted with any of the usual disdain, in fact quite the contrary. Indeed Sam spent some time explaining how he and his colleagues spent more time coming up with non-alcoholic drinks for sister restaurant Rogan and Company than they did the alcoholic ones. The excitement was palpable; could L'Enclume produce a non-alcoholic experience to rival the likes of Manchester House?

In short, no. Not even close. Around half way through the meal after finishing her (admittedly very nice) cocktail, my wife asked a waitress if she could try a different one, variety being the spice of life and all that. The answer was a resounding no, since they did in fact only have one non-alcoholic cocktail available. Cue a bit of awkward silence, I was genuinely surprised after all we'd been told before, as was my wife. The fact the waitress didn't offer any alternative suggestions for drinks whatsoever didn't help.

Unfortunately I have to say the less than stellar drinks experience extended to me with my wine pairings also. When I'm in a top restaurant (which L'Enclume unquestionably is) I expect the person pouring my wine to have a certain level of passion and authority, or at least be able to convince me they do. This wasn't the case here; the delivery was not exactly inspiring. To compound a pretty poor wine experience, although some pairings were good, many were disappointing, and the measures for many courses were unbelievably small, you'd literally get more to sample if buying a bottle in most restaurants. The most obvious comparison is The French where the delivery was much better, the pairings were much better and the measures were at least large enough for me to taste something. Definitely room for improvement. Drinks issues aside, the overall service was very good throughout but as you have probably realised by now, I've saved the best thing about this restaurant until last: The food.

It was, quite simply, sensational.

Dinner began with what must surely be the most divine selection of pre-main-event nibbles anywhere in the UK. Delightful game dumplings, delicious raw scallop with caviar, delectable creamed turnip and lamb's tongue, sadly my limited vocabulary is quickly running out of words that start with "d" but hopefully you get the idea. There were so many pieces of outstanding cooking that followed; the baked squash with egg, valley venison and two part lobster dish were all fabulous.

The only dish I found a bit underwhelming was the newly added hake with crab and pine, but the Penny Bridge Dexter beef dish that followed was absolutely sensational and my favourite dish of the night. The waitress who delivered this course was a perfect example of Cumbrian charm, telling us how the beef is farmed just down the road by a guy called Mark. Loved that waitress. Sadly we only saw her for that course! Desserts weren't quite as strong but still very impressive with plenty of interesting flavours and some lovely little miniature ice cream cones to finish.

After dinner came an unexpected coffee experience; my wife requested decaf but both her and my coffee were poured from the same jug which was interesting. Apparently the shot of espresso sinks to the bottom or something, it didn't sound convincing, but she's still with us so I presume the system works. But then, just to confirm my belief that the pillars supporting the food at L'Enclume aren't all that they could be, when the bill arrived, I'd not been charged for my wine flight. Of course being an honourable human specimen I told the next passing waiter, with hindsight given the very disappointing wine experience, I would have slept just fine if I hadn't. C'est la vie.

Yes, I have whinged a lot in this review and yes, the niggles are plentiful. However this restaurant is all about outstanding food which is unquestionably the most important aspect. So mind-blowingly good is the food here that I'd happily go back any time I could; it's almost enough to make me forget all those other little, annoying, barely significant faults. Almost.

There's no real dress code here, I wore smart trousers and an open shirt which wasn't uncommon, but there were guys in jeans and un-tucked shirts too. If you come wearing a jacket, expect to be relieved of it at the door.

Aim for a seat in the conservatory. Ignore anyone who tells you the parking is terrible (well, except on race days).

It's rare for me to say this, but I genuinely think all the guides have it spot on here. So why not three Michelin Stars? Well, firstly it would take a monumental effort to achieve three stars in Northern England; sad, but true. But the second point is really more important. Michelin can argue until they're blue in their little tyre munching faces that "it's all about the food", and sure, at one star level there are plenty of examples to justify that stance. However, my personal belief is that if everything that goes with the food is not la perfection fantastique, there's no way you're getting a third star in the UK guide. Maybe Michelin will prove me wrong and I really hope they do, but I just can't see it.
Group size: 2 adults. Total bill (including service): £375.
View full restaurant details for L'Enclume
« The French review
The Samling review »