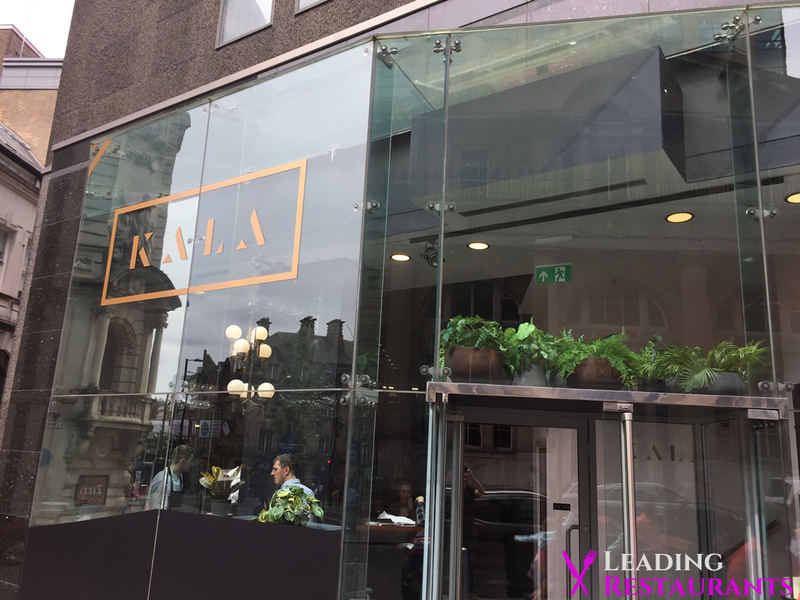 If you follow anything to do with the restaurant scene in the North West, it's likely you'll have heard about Elite Bistros and its founder (and very active social media user) Gary Usher. My first encounter with the group came via a fantastic meal at the original Sticky Walnut back in 2015, and I've since enjoyed quality meals (and seeing my name on the crowdfunding wall) at Hispi too.

As well as Hispi, they've previously launched three other crowdfunded restaurants plus now, the latest addition, Kala, which I was delighted to support and get my name on the wall for too (although this time, that pledge wall is quite a lot bigger). Following a record breaking Kickstarter campaign, the restaurant opened to the public in central Manchester on May 1st 2019; I was very much looking forward to my first visit as I made the trip with my wife, our two young children and my wife's parents on a sunny Saturday later that month to celebrate my daughter's birthday.

From the outside at least, this has seemed to be the most difficult launch for Gary Usher to date. Costs spiralled higher than planned, social media spats with local "celebrity" restaurant reviewers and suppliers were prevalent, and the general pressure of opening a large restaurant in an expensive location clearly wasn't an easy weight to bear. But open they most certainly did, and I have to say as soon as we arrived it was clear where the money had been spent, it's a good looking restaurant. We did catch a glimpse of Gary Usher by the door as we arrived; it crossed my mind to say hello but thought I'd be nice and leave him alone this time, guessing he has enough to deal with. Plus, I might have been tempted to mention that one tweet from 2016 I was offended by... sure that wouldn't have gone down too well.

We were greeted warmly by the other staff and shown to the restaurant area upstairs, complete with a high chair already in place as requested (always a good sign). There's a full carte available at lunch which is great to see (and I think the norm now for most good restaurants) but a shorter (and cheaper) lunch menu is available too. There's also a kids menu but like at sister site Hispi, this is a little bit uninspired. Yes, it's a relief to have a children's menu at all (and I know many people, usually non-parents, argue the case for scrapping them completely) but it would be nice to have some starters on the kids menu so they too can enjoy three courses, and some more interesting dishes in general. I still remember the children's menu my kids ate recently at The Angel at Hetton, the children's dishes there were of a really high standard and properly thought out; it would be great to see more restaurants show a bit more ambition and follow suit.

There's a fairly standard drinks list (with a less than stellar non-alcoholic selection) and I had my usual Hendrick's and tonic to start which was perfectly well delivered. The wine list is more interesting, albeit not huge, although there is a healthy selection available by the glass. We enjoyed a very pleasant bottle of Dandelion Lionheart Of The Barossa Shiraz with our meal which came in £37 for a wine that retails for around £12.50. The mark ups on the bottles I looked at fell somewhere between the 2x than 3x range, which is what you'd typically expect to see for a city centre restaurant like this in my experience.

Bread and snacks cost extra here, so we went straight into the starters which arrived with not too long of a wait. First up for me was the beef tartare with oyster and beef fat croutons. It was an excellent dish; one of the best tartare dishes I've had for a long time. Other starters around the table included a slightly uninspired plate of asparagus with a sauce gribiche, and a tasty turnip salad with curried mussel mayonnaise. As mentioned, there's no option of a starter for the kids, but they did enjoy their fish/chicken and chips, these were delivered with our starters without any issue.

For mains, I opted for the monkfish with red cabbage and a smoky BBQ sauce. It was a good dish, the monkfish itself was cooked beautifully but perhaps as a whole it wasn't quite worthy of the £30 price point (the price having already gone up within the first month of the restaurant launch). I'd happily eat that plate again any time though. My wife had the feather blade beef with truffle parmesan chips (an Elite Bistros staple); she wasn't too keen unfortunately as it was pretty heavy on the seasoning, but I was quite happy with the bits I tried, I don't mind a good dose of salt.

Last up for me was banoffee choux bun with roasted banana ice cream; it wasn't complicated but it was delicious. My wife enjoyed her lime and mint sorbet which comes complete with a shot glass of Malibu rum; a mildly strange selection for her given she doesn't drink, but I bravely stepped up and took care of that little shot glass. She did very much enjoy the rest of the dessert though. My daughter too enjoyed her kids banana ice cream, and my mother-in-law said the parkin with stem ginger ice cream was a top piece of work also. We even received a little birthday plate with a couple of chocs for my daughter which was very much appreciated; it's always nice to visit restaurants who still make a bit of effort to celebrate special occasions.

And so, after a couple of glasses of cognac for myself and the father-in-law, and a quick trip with my daughter to view the family name on the pledge wall, a very enjoyable meal came to an end. Service throughout was excellent (our waitress was just great) and the food on the whole was top rate too; this is by any standard, an excellent restaurant.

But there is one thing that unfortunately gnawed at me a little bit afterwards, and that's the pricing. With starters at £14, mains at £30 and desserts at £10, we're getting into Michelin star (1*) carte pricing here; a meal for six I very much enjoyed the week before at a 1* restaurant (albeit with a bit less to drink) cost quite a lot less, but still came with all the "free" extras you'd expect in a restaurant of that level (nibbles, bread, p4's etc). Did I enjoy my overall visit to Kala more? Yes, I probably did, but when I think "bistro", my mind conjures up an expectation of "good value" and I just didn't walk out feeling that.

Of course, there are more expensive restaurants in Manchester serving food that isn't as good, and I'm sure some customers will disagree on my verdict of the food entirely (I remember a customer tweeting when Hispi launched that the food was better than L'Enclume... honestly), but for me the food although excellent, isn't at 1* level, and nor is it pretending to be. And look, I completely get this is an expensive city centre unit, the Kickstarter vouchers mean covering costs at launch is made infinitely harder, and also that there are more accessible lunch and bar menus available for those wanting to spend less. I also reckon any GP the restaurant does make will probably need to be spent fixing the dreaded Saniflow units in the toilets.

I couldn't help thinking back to that tweet in 2016 that pissed me off (sure you knew this was coming); after the aforementioned sensational meal in 2015 at Sticky Walnut (was again for my daughter's birthday), we returned a year later and had another great meal. I didn't review here but left another five star Tripadvisor review of gushing praise for a super birthday meal; about a day after that review Gary Usher tweeted something that ended with "bistros aren't just for birthdays". To be so dismissive of people like me who live a considerable distance away, can't afford to eat out constantly yet still make a special journey to visit his restaurant for a special occasion, I found really out of order. I have enormous respect for Gary (and of course I've backed and visited both Hispi and Kala since) but this still irks me a bit, as you can probably tell.

The irony with Kala (don't worry, there is a point to this story) is that despite it being a lot more accessible to me now location wise, I simply can't afford to visit regularly given the prices charged (in the same way I can't eat at a 1* restaurant every week, as much as I'd love to); bistro pricing this isn't. I'm sure I'm not the only one in that boat, but fortunately for the restaurant, there are plenty of far wealthier people than me in Manchester who I'm sure will help the place thrive. And of course (as they did for our visit) to outlive other restaurants on the very street many have failed in recent years, they'll have to continue to embrace people who visit only for special occasions too.

Whatever happens, I'll certainly be back to try more of the menu as regardless of any other niggles, we thoroughly enjoyed our visit. The service was outstanding and the food was very good too; I don't think anyone can really ask for too much more than that.

None I could see, but I would imagine people might make an effort for dinner.

Too new to be in any of the guides as yet, but I'd expect to see a strong entry in all three this year.
Group size: 4 adults & 2 children. Total bill (including service): £292
View full restaurant details for Kala
« The Moorcock Inn review
Alderley Edge Hotel review »