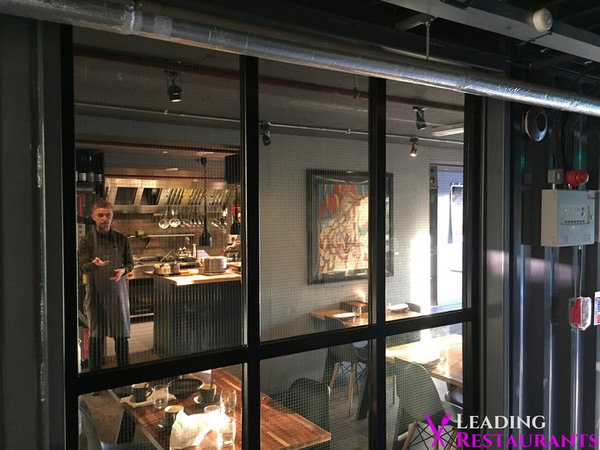 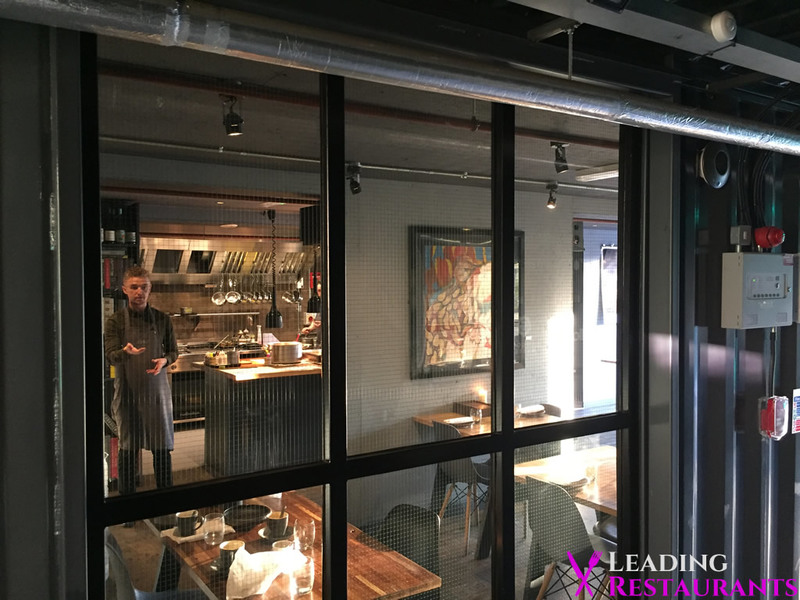 Situated on the outskirts of Sheffield city centre, in some former shipping containers no less, Joro is a restaurant that had been on my list to visit for quite some time. Promising "true innovation and the finest available native ingredients" (according to the website anyway), I had high expectations as I duly rocked up for lunch with my sister and her recently-wed husband on a sunny late September Saturday.

I took the train and although I thought I'd left plenty of time, of course my train was a good thirty minutes late arriving into Sheffield (typical). After a brisk twenty minute walk from the station, we arrived around ten minutes late for our reservation; with hindsight a taxi might have been a better idea, it's a fair old trek. There was no problem on arrival though, we were welcomed warmly, coats were taken and we were shown to our table.

The restaurant is actually quite a nice space; a sort of Scandinavian industrial vibe as you might expect, nice and open with a good view of the kitchen. In an effort I suppose to remove any notions of formality, cutlery is a help yourself affair via a wooden box in the middle of each table. The first bit of service I didn't like occurred not long after we sat down with the dreaded "would you like some English sparkling wine?" question. This has always felt to me like a bit of a deceptive inquiry; sure let's have three glasses of something nondescript with no mention of a price tag, it's the kind of thing I'd associate with a seedy gentleman's club. Not too many restaurants do this to me anymore so I was a bit surprised to see it here; whilst you can't begrudge a bit of upselling, they already knew I'd booked the full tasting menu so I was slightly irked they wanted to extract more money from me at the very first possible opportunity.

I politely declined and we were brought the drinks menu instead; there's a decent offering across the board including a good number of wines by the glass (although I did spy the non-alcoholic section was rather slim); we started with three perfectly nice G&T's. Food wise there's a nine or twelve course tasting menu; I believe there is a lunch menu too but it wasn't offered to us, so it's possibly not available at the weekends. Naturally, for us it had to be the twelve courses. We were given a printed menu but our waitress did inform us that this was merely "a guide" which was... interesting... indeed the menu itself stated at the bottom the courses may come in a different order to what was listed. I've had menu-less tasting menus before, but I think this was my first experience of a random-course-delivery tasting menu and did make me slightly fearful desserts would be interspersed amongst the savoury courses. My sister is vegetarian but this was no issue and the appropriate courses were modified as required.

After a pleasant little beetroot and goats cheese cracker nibble, lunch began with the fourth item on the tasting menu, a little bowl of what I suppose is best described as sweetcorn curry. It was a nice little dish with a strong curry flavour, but I knew better was to come. A tasty if slightly dull bowl of tomatoes in rapeseed oil followed, before a nice mackerel dish and a delicious piece of pork belly in a hoisin sauce. An accomplished Roscoff onion and blue cheese dish was next, again with some intense flavours (accompanied by some decent sourdough bread), followed by a less memorable broccoli dish, but things picked up again with a lovely little piece of lamb shoulder.

Last of the savoury dishes were a chunk of celeriac cooked in wagyu fat with cheese, and a very tasty little piece of duck with carrot. I think it's fair to say I enjoyed all the savoury courses; there's not a lot of delicacy in flavour here, it all comes in smack-you-in-the-mouth punching bursts, but there was definitely some delicious food on show. Fish and meat portion sizes were smaller than I typically see on tasting menus, but just about OK I'd say for a twelve course offering.

Desserts in truth were not quite as strong as what had gone before, but still enjoyable. Frozen milk and blackberries, whilst not unpleasant was about as interesting as it sounds, but following a curious fermented rice dish, the butter and muscovado parfait was a lovely dessert to complete the meal.

Service throughout was really without fault; we all opted for the matching wine flight which was very enjoyable and better than I'd been expecting actually. The wines were delivered in an accomplished fashion with all of them poured at the table (as I much prefer) and explained perfectly by the well-trained staff. There were even a couple of variations for my sister's vegetation menu where required. Coffee was accompanied by some tasty ginger and miso fudge; not exactly a stellar p4 experience considering the heights this restaurant would like to reach, but better than nothing I suppose. And so, after around four hours (which is probably why we weren't offered cheese), a very enjoyable lunch came to an end.

Enjoyable though it was, one thing that did irk me a little was the lack of value. £125 for the tasting menu and wine flight just didn't feel like a great deal all things considered, but I can only base that on my experience of similar venues at a similar level. Ultimately there's nothing wrong with charging whatever you think your customers will pay, not sure I'd pay it again though.

Having said that, there's no doubt Joro is a top restaurant but in truth, although the food was delicious (and worthy of my version of the Hollywood Handshake for Head Chef Luke French as we left) I really wanted one or two courses during my meal to leap out and make me think "holy **** that's good" but none of those little morsels quite reached those dizzying heights. That's the difference in my experience for tasting menu restaurants between a star from our favourite tyre munching inspectors and no star, but this is probably about as close as you can get without having one.

Good drinks/wine list (except if you're not drinking). Vegetarian menu option.

I think the AA and Good Food Guide have this spot on. The Bib Gourmand I have a bit of an issue with as it's supposed to represent "value" which I didn't find here (and we weren't even offered the applicable lunch menu), but I think the restaurant is perfectly worthy of some recognition from Michelin, so who am I to argue.
Group size: 3 adults. Total bill: £411.
View full restaurant details for Joro
« Wood Manchester review
The White Swan review »