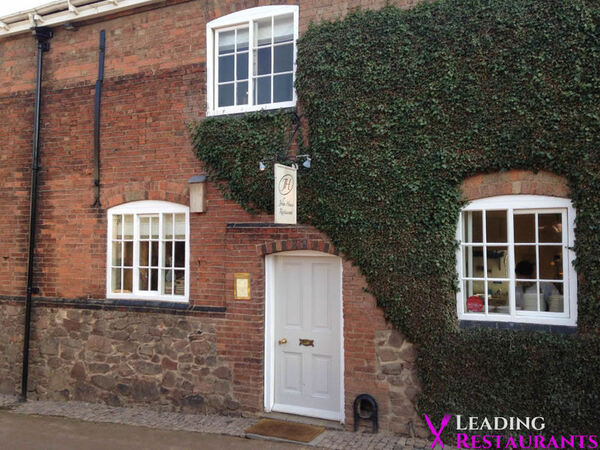 It's always rather exciting taking a trip to a restaurant our favourite tyre munching inspectors have deemed worthy of the precious bestowment of a star for the very first time. It is, after all, an accolade of great merit and considering the many stellar restaurants in the UK not deemed worthy of such an honour, a new addition must be doing something right. One such new addition in the 2016 guide is John's House, so called because the chef patron is named John and the restaurant is, well, a house. It was there I paid a visit for lunch on a sunny Friday afternoon with my wife in tow.

The restaurant is situated in the rather quaint village of Mountsorrel in Leicestershire. Parking is a bit of an issue; there's limited space in front of the restaurant but the attached farm provides considerably more space around the back. Whether you're supposed to park there I do not know, but no one ran at me with a pitchfork so I assume all was well.

The building itself is nice; it is literally a house with the lounge downstairs and a few tables on the top floor, but very nicely finished. The welcome was warm enough albeit mildly pretentious, but it's clear there's a strong focus on service here. This was ably demonstrated by the maitre d who was visibly angry with himself for asking if I wanted lemon with my Hendricks, before quickly correcting himself (to cucumber of course, but you know that).

The lounge is a pleasant enough space to peruse the decent wine list and menus; at lunch it's a lunch menu or tasting menu (no carte), and given I had a tasting menu coming up for dinner elsewhere, three courses was the sensible choice.

Lunch began with some rather stellar bread; I mean seriously, it was excellent in particular the onion brioche bun. I rarely have seconds of bread, but I did here. Great butter too. Sadly the bread proved, by some distance, to be the best part of the meal. I opted for the salmon to start, it was an OK but pretty unimaginative dish; salmon, green and cream, yawn yawn yawn.

Things however went from dull to downright disappointing however with the main of ox cheek; it just didn't taste good. Not really sure what the intention was with the dish, but it didn't work. My wife, who'd received a pretty good oxtail dish to start, really struggled to eat it.

Dessert was better but nowhere near the standard I would have expected; there was some nice sharp rhubarb and sherry vinegar ice cream which worked well, but the brown sugar cream element, the key part of the dish, was bordering on something you'd get out of a packet. My wife had an apple dish consisting of really sharp apples, really sharp cream and gloopy rice pudding. Not good. Not good at all.

And so a disappointing meal came to an end. There were elements of good cooking here but the meal as a whole was a long way below the standard I'd been expecting. It's a nice venue and the service is good, but none of that really matters if the food isn't up to par.

Jeans and shirt seemed OK for lunch; I'd possibly go a little smarter for dinner.

Limited parking in front of the restaurant, but other parking available nearby.