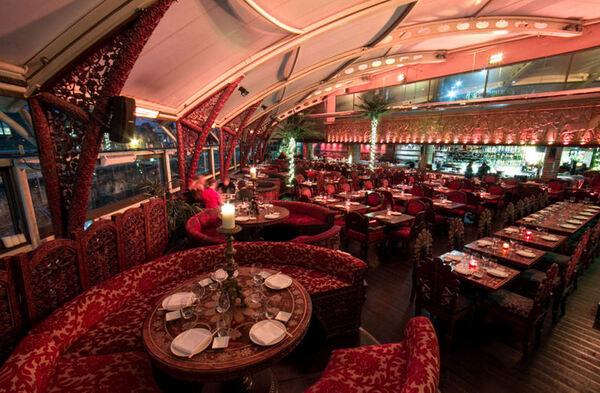 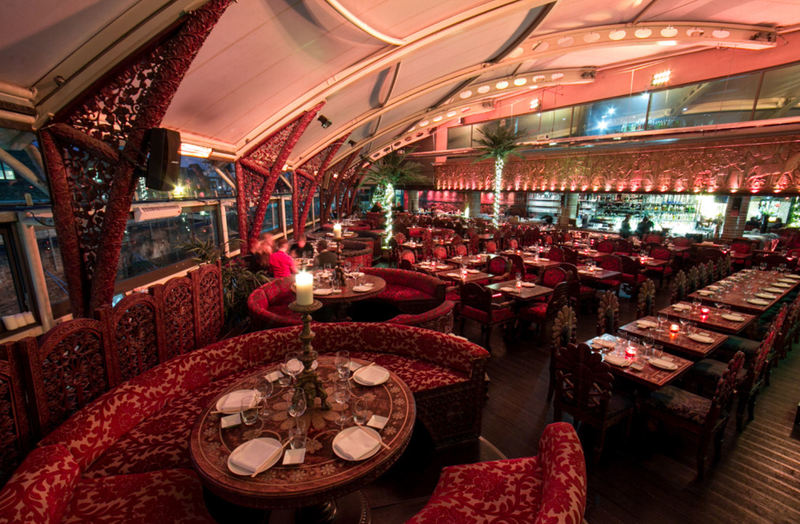 There can be little doubt that Gilgamesh is one of the most visually impressive venues in London. The "red carpet" treatment was literally the order of the day as, on a chilly April evening, I cautiously negotiated my way past some substantial but perfectly friendly door staff and ascended via a single file escalator to the considerable opulence of the lounge bar.

Spectacular wooden carving adorns, well, every surface you can imagine and this theme continues into the gargantuan 200+ cover restaurant area. I can't help but feel this is the sort of place rebellious children of the Victorian gentry would have loved to frequent as they attempted to outshine their parents exploits on the Grand Tour. Things feel a little less luxurious on the restaurant floor; don't expect much elbow room or peaceful conversation, but the rather unique wooden chairs and inlaid tables do still successfully promote a sense of grandeur.

After being shown to our table by our waiter for the evening, a perfectly nice and attentive chap, I can't help but feel rather fortunate to have been seated in a raised booth which does give a certain unavoidable sense of supremacy as I gaze out over the diners below on the restaurant floor. And a short while later, when a celebrity boy-band member ascends the step of righteousness to takes his place in the adjacent booth, it's clear to me that these are the good seats.

So what of the food? The £55 tasting menu offered some pretty minute portions of varying quality, all delivered at once too which was interesting. A bit of self service was required as plates stacked up on tables outside our booth due to insufficient space. There was definitely some good cooking in there however, the beef bulgogi being a particularly memorable triumph. Dessert was a non-event; what I would describe as a "small" tasting menu portion actually became "microscopic" when it was revealed our waiter hadn't forgotten half the plates, no no, it was one small plate per two lucky people. Perhaps he'd analysed our waistlines and made an executive decision.

Despite some rather erratic plate delivery, I did leave with a positive impression of the service as a whole. We occupied the table for a good few hours; at no point were we rushed and service was never too far away if needed. After the meal we were provided with wristbands for free entry to the club upstairs. If your perfect ending to a night involves seeing wag-wannabes throwing themselves at a drunken ex-Eastenders actor, then my friend, this is undoubtedly the post meal path for you.

In short, I enjoyed my visit. Half decent Pan-Asian grub, attentive service and a spectacular setting is a pleasant enough combination.

I wore not-my-best shirt and not-my-best jeans and felt a little underdressed compared to the many beautiful people. If you're a "celebrity", wear anything you like. If not, an open shirt with smart trousers is probably a safe bet.

Ask for a raised booth, especially if you're a member of a popular musical ensemble.

The lack of any entry in the Michelin and Good Food Guides is no surprise; in many ways it's surprising that a place of such multi-faceted spectacle is deemed worthy of a rosette by the AA. However, based on the food I ate it's a rosette that's perfectly deserved.
Group size: 6 adults.
View full restaurant details for Gilgamesh
Manchester House review »