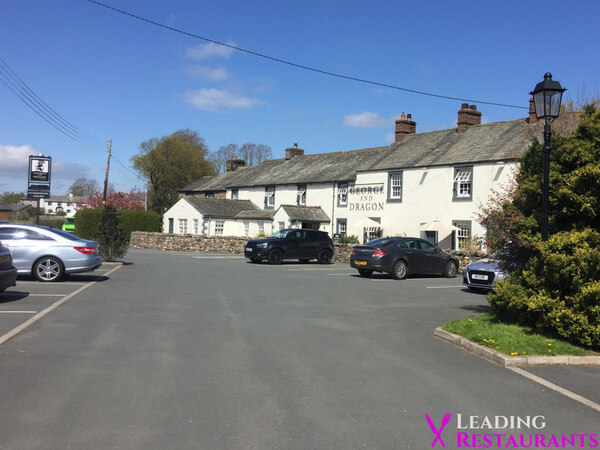 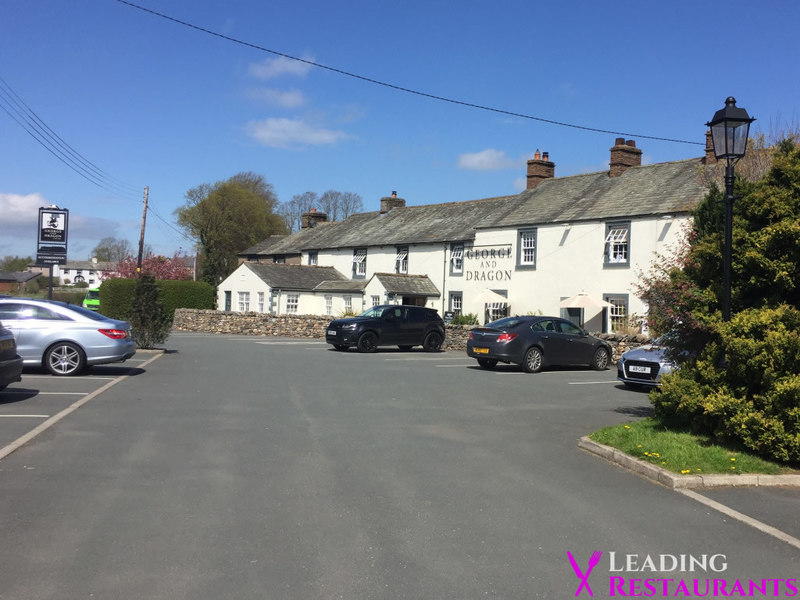 I do love a good pub lunch. Having held an entry in the Good Food Guide for a while, as well as a Michelin Guide listing and even a recently awarded AA Rosette (hurrah for the holy trinity), The George and Dragon seemed a pretty safe bet for a decent meal. And so, I ventured in for lunch with my wife and two young children on a gloriously sunny May Saturday whilst on a trip to Cumbria.

We arrived a little late due to traffic but there was no issue getting a place in the substantial car park. The welcome on arrival was fine and we were shown to our table in the dining area; it's a bright and airy modern country pub space. A highchair was already in place as we'd requested and it's clear this is a very child friendly venue, with the three-course children's menu doubling as a colouring-in competition. In addition to the adult lunch menu, which proudly highlights the locally sourced nature of the food, there was a large specials board with a wide range of not-on-the-menu options.

After my usual Hendricks and tonic (minus cucumber sadly), the starters arrived pretty promptly. Lunch for me began with the black pudding and pork rissole. On the whole it was a tasty dish, the black pudding had a good flavour but was sadly overcooked (it had a bit of a nasty thick dry crust on the outside), but the pork rissoles were nice as were the accompanying elements including bacon jam. My wife's rabbit pie (well, a slice of pie) was enjoyable too although my daughter's cucumber and carrot was really basic (just a few chunks of each in a small bowl) even for a kids menu dish. My baby son did enjoy the garlic bread however which was very good.

For my main, I had the lamb cutlets. This was almost a fantastic dish, basically a big lamb haggis-like ball with a bone sticking out. The shredded lamb on the outer layer was delicious and perfectly seasoned, complimented beautifully by the chunky mint sauce. The other elements on the plate, including carrots and a butternut squash puree were well executed also. Unfortunately, beneath the shredded lamb in my lamb ball, the cutlet itself was very poorly cooked, horribly chewy with significant chunks of it being borderline raw. If the ball had just consisted of the shredded lamb, it would have been a much better dish. My wife didn't have much luck either; her goat burger although nicely spiced was also overdone and pretty dry, a real shame. My daughter's burger from the kids menu was also a tad on the dry side and the bread bun overly solid, but it tasted OK overall.

For dessert, we jumped to the specials board in search of something delicious. Unfortunately, whilst my tiramisu was well presented on the plate, the flavours were lacking; if you served that in Rome you'd likely get deported. My wife's fruit crumble was tasty if a bit agricultural on the presentation side but my daughter enjoyed her vanilla ice cream.

After we'd finished desserts we waited a long time for someone to return; I was eventually able to request the bill but then it took an extraordinary amount of time (over twenty-five minutes) for the bill to be delivered. I think in truth they just forgot we were there, although the place was far from full; at least it made it very easy to not leave a tip though. It's a shame really as the service in general was good aside from this.

Overall there were some promising ideas on display in the cooking here, but unfortunately a real lack of care with some basic elements which I wasn't expecting. Nonetheless, when combined with a nice venue and decent service (putting aside that incredible wait for the bill at the end), you could certainly do a lot worse than visit here for a family friendly pub lunch.

None at all, it's a relaxed place.

Child friendly. Plenty of parking at the front of the restaurant.

I think the rosette is just about merited but I think the Good Food Guide have been a bit over-generous with their praise based on what I ate.
Group size: 2 adults & 2 children. Total bill: £93.
View full restaurant details for George and Dragon
« The Black Swan review
The River Restaurant at The Lowry Hotel review »