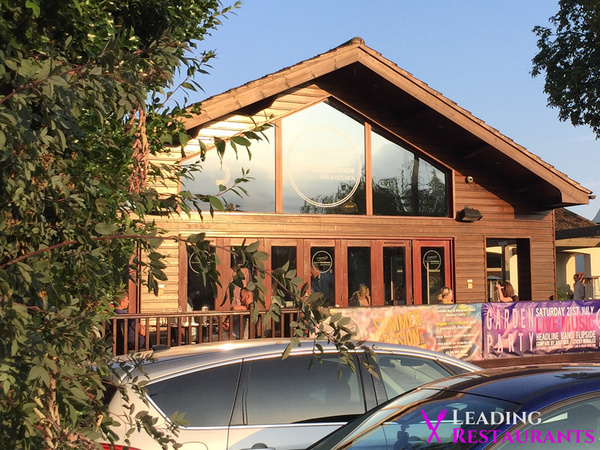 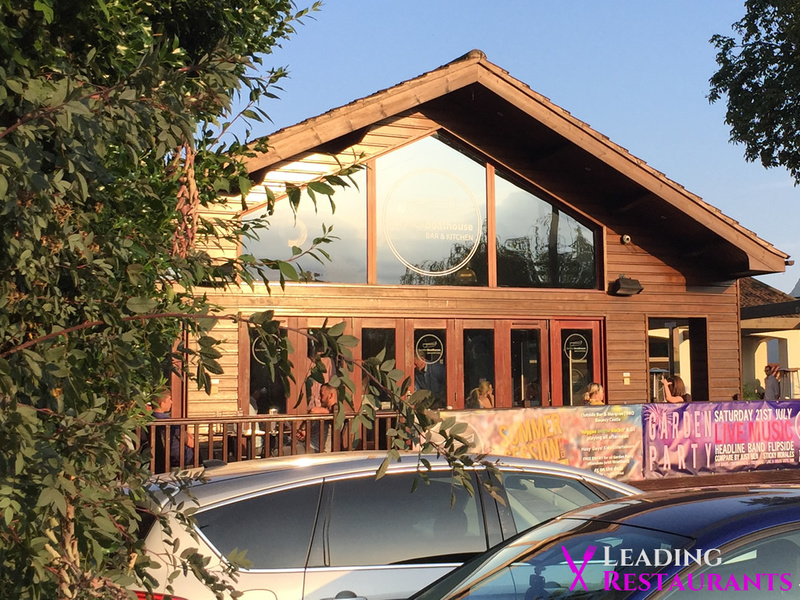 It's fair to say this summer has been exceptionally glorious one. Whilst on a family trip to Newark in Nottinghamshire, a glass fronted restaurant on the river serving "home-cooked & locally produced food" seemed an ideal place to visit for dinner. And so, it was with a good sense of anticipation that I visited Farndon Boathouse with my wife and two young children on a beautiful Friday evening in July.

The restaurant is slightly difficult to find for first timers, tucked away behind some housing (just head for the river) but there's a decent sized car park available. We arrived just as the restaurant opened for dinner; there were a few people sat outside on the terrace enjoying the sun, but inside the restaurant was very quiet. It did fill up as the evening went on and to be honest I felt slightly underdressed in jeans and a polo shirt, there's definitely a bit of a trendy vibe here. The welcome on arrival was OK although despite me having booked a long time in advance, the staff did seem slightly surprised to see us. There was also no high chair set out as I'd requested when booking (never a great sign).

The dining room itself is a decent space, a high-ceiling boathouse with full height windows overlooking the river. That said, on the very sunny day we were there, this did create a bit of a greenhouse effect and I did get a bit toasty with the sun blasting down on my forehead, some air-con or at least blinds to cover the top section of window would definitely help. The place did feel a bit more like a bar than a restaurant in truth, but more on that later.

On offer were the carte and an early bird menu; we ate from the carte and there's an OK albeit pretty limited three course kids menu also (better than nothing I suppose) which doubles as a colouring-in/quiz page. There's a concise but considered wine list also with a few options available by the glass. My Hendricks and tonic to start was fine, my daughter asked for apple juice and this came fizzy rather than still, but they replaced it with no fuss whatsoever when I asked.

After a nice little complimentary bowl of squid rings, dinner began for me with the deep-fried brie and chorizo salad. This did exactly what it said on the tin really, all the elements were well delivered and it was a nice tasting dish. My wife had the mackerel with a tasty potato salad which she enjoyed also. Next up for me was the pork with mustard mash. This wasn't anything spectacular, but the pork was well cooked and the flavours were good. My wife had less luck this time with a not-so-great duck dish. I should add that from the kids menu, my daughter munched away happily on her garlic bread and fish & chips.

Up to now the food had been tasty if unspectacular, so I was expecting something a bit more inventive from desserts. Unfortunately my chocolate and Bailey's mousse, although reasonably flavoursome, was visually very dull. The mousse was just served in a little glass, it looked very much like a kids menu dessert. My wife's Eton mess did show a little bit more endeavour on the presentation side, but sadly the flavours were really lacking. For my daughter it was ice cream or ice cream, but she likes ice cream fortunately.

And that was pretty much it for the food. Service overall wasn't great; there were a lot of staff (some more miserable than others) but they seemed to spend most of their time just mulling about not doing a great deal. We had to chase up a couple of apple juices that took a long time to arrive and despite me shifting them to the edge of the table, there seemed to be a worrying aversion to removing any empty glasses (although they did eventually).

It did feel at times that the place is set up very much more as a bar than a restaurant which is a shame, as the majority of the food here is actually pretty decent. I did notice they run quite a few theme nights (completely understand the need to attract punters) but it can't be easy to balance being a fine dining restaurant and running "Butlers In The Buff" evenings.

Overall though, it was an enjoyable evening and although neither the food nor service were quite as good as I'd hoped, you could certainly do a lot worse than have three courses here.

None really, but most of the other people dining on the Friday evening we were there had made an effort, so I'd probably wear a shirt for dinner.

So, this isn't the fault of the restaurant but the AA guide has a serious imbalance problem currently, with there being way more two rosette restaurants in the UK than there are one rosette restaurants, it doesn't make any sense. I think Farndon Boathouse epitomises that problem; for me it's a one rosette worthy restaurant all day long, but not more. Obviously the AA have other ideas but they're devaluing the whole rosette award structure by doing so. There's not really a lot here to interest the other guides.
Group size: 2 adults & 2 children. Total bill (including service): £99.
View full restaurant details for Farndon Boathouse
« Tyddyn Llan review
Brassica Grill review »