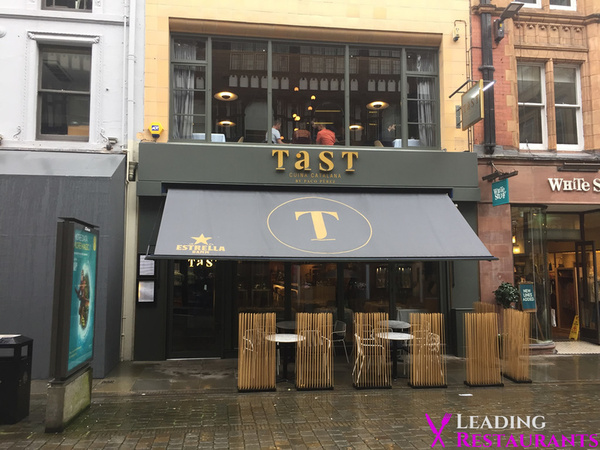 Opened in central Manchester in July 2018, Tast Catala is the first venture into the city by renowned (and multi Michelin star awarded) chef Paco Perez. Serving Catalan inspired dishes in informal surroundings, the feedback thus far seems to have been overwhelmingly positive and has no doubt kept the restaurants backers (including Manchester City manager Pep Guardiola no less) very happy. The plan with the main more casual dining restaurant was never to go seeking awards, however with the top floor tasting-menu-only addition of Enxaneta in 2019, those awards seem very much on the agenda. I was muchos looking forward to giving the place a try as I visited for dinner with my wife on a slightly wet Friday evening in August.

The booking process, in truth, had been slightly long-winded. After making a reservation online, instead of giving my card details there and then to pay the £50 per person deposit, I was instead given instructions to go to a separate site and purchase the required deposits, as if I were buying something online in a standard ecommerce transaction. I suspect the reasoning for this is rooted in saving the restaurant money on card transaction fees, but it's possible some people may find the process mildly irritating. That said, there is the option to pay the deposit in person at the restaurant if you prefer.

We arrived a little early for our reservation and we warmly greeted by a very happy gentleman at the front door, before being guided up to the top floor of the restaurant to take our seats. It's a small space with only seven tables; the decor is pleasant albeit fairly minimalistic, and there's some background music which was a plus given we were the only table in for the majority of service (not that I mind that personally). We had selected the fifteen course menu when booking (a shorter ten course menu is available) and I opted for the matching wine flight also. The wine/drinks list is fairly comprehensive and for my wife (who doesn't drink) there were three non-alcoholic cocktails available; not a huge selection by any means, but a better effort than many restaurants. She sampled all three during the meal and said two were very good.

After a very fine Henrick's and tonic to start, we were all set for what I was sure would be fifteen excellent courses. I should add that when they say fifteen courses, they are including all the snack courses in that count; an increasingly popular tactic nowadays. First up was a Caesar salad deconstruction consisting of a little salad tube and a glass of lettuce juice basically; an interesting and fresh start to the meal. The Padron pepper that arrived at the same time was less interesting, but things moved up a notch with the very tasty prawn cone; delightfully fresh tasting prawn within a very delicate tempura prawn shell; delicious.

The next snack of a bloody mary oyster was served on a life size ice hand; it certainly made an impact and again was an impressive mix of multiple flavours. Last of the snacks was a squab bunyol, a little fried dough ball with a very liquidy centre. Our waiter wisely advised us to eat it whole; we would have created a fair bit of mess if we'd missed that instruction. Again though, it was a very enjoyable little bite and overall, I was pretty impressed with the standard of the snack courses.

The level however increased substantially with the first proper dish of the menu; a plate of tuna and caviar, complete with various other bits including that classic luxurious touch, gold leaf. It was a beautiful dish but the flavours were just absolutely stunning; probably the best tuna based dish I've ever eaten and a dish that without question would happily sit on any two Michelin star menu in my opinion. The balance of the various gels and sauces with the tuna and caviar was just perfection; a truly inspired dish.

The high quality continued with the next course of 'sea egg benedict' which was basically a salmon mousse encased in a white egg like mousse; rich, indulgent and once again, very tasty. It was around this time some decent sourdough bread arrived, served with a very good quality olive oil. Another rich and tasty mushroom dish was next and then a delicious lobster cannelloni; another beautiful plate with a lovely creamy sauce. Up to this point, I'd enjoyed every course, the only issue starting to niggle was the constant richness of every dish (although each was individually delicious) was starting to make the menu feel a little unbalanced.

The eel dish that followed was unquestionably the weakest of the savoury courses; my wife's eel unfortunately came with quite a lot of bone still embedded which was a shame (although there was none in mine). Up next was a dish listed as 'Mediterranean Sole'; in reality the sole was from Dover but with Mediterranean flavours. The cooking of the fish was excellent and the accompanying elements (including some neat translucent pasta) were very tasty yet again. The final two courses of chicken and lobster with rice, and then squab pigeon with a one thousand day old 'Mole' sauce, were perhaps not quite a spectacular as the earlier savoury dishes, but still of a high calibre using top quality ingredients.

Considering the length of the menu, I was surprised to see only two desserts (and there was no crossover either) and it's fair to say the overall standard of the dessert plates wasn't as high as what had gone before. First up was a pretty and perfectly tasty (albeit mildly uninspired) dessert of mango and yuzu. This was followed by the finale of 'chocolates and biscuits'; in reality three different layers designed to look like a chocolate biscuit. This as a concept was more interesting, but although the flavours were good, the top layer of ice cream in particular was rather too solid to make this a top rate dessert.

The meal concluded with a selection of not-on-the-menu petit fours (my favourite kind) and I did very much enjoy these. Sadly, my desired cappuccino was not an option as we were informed the coffee machine was broken, which was a tad surprising to hear for a restaurant at this level charging these prices. That aside, service was good throughout. The wine parings were very enjoyable with some really interesting selections, but on the downside, every wine was poured away from the table. At least the bottles were shown however and the explanations were suitably thorough.

The menu pacing was generally good until about two-thirds of the way through the meal when another table (of two) arrived for dinner; everything slowed down noticeably at that point. For a restaurant with seven tables, having two occupied shouldn't really present any issue. The only other service issue was when we presented with the bill; they'd not removed the £100 deposit I'd faffed about with paying weeks earlier (watch out for that) but this was rectified quickly and yes, I still left a healthy tip.

Overall though, the standard of food here was outstanding with that dreamy mix of top quality ingredients combined with innovative ideas; I thoroughly enjoyed the meal. Yes the menu was maybe a touch too rich throughout and lacked a bit of light and shade, but compared to the standard of each dish, that's a relatively minor complaint. The service too was very strong as was the wine flight, which had clearly been well thought out. So, with all that in mind, why did a restaurant of this calibre only have two tables in on a Friday night? Well, firstly, there's the price; at £135 for the full tasting menu we're well into two star pricing here. And I suppose as much as it pains me, I'm not sure enough of Manchester is really ready for a restaurant of this level. As the gentleman on the other table in the restaurant "hilariously" remarked loudly after seeing our waiter ably deliver a couple of glasses from our wine flight: "We'll just have a bottle of wine, we don't need a different glass every course"; perhaps that says it all really.

One thing that would help the popularity massively is a precious star from our favourite tyre munching inspectors in October; there's no doubt that's the aim here and they even have the rolled up hand towels in the toilets (there's a set of toilets on the same floor as the restaurant by the way) primed and ready. And I fully expect they'll receive one; there's absolutely no question in my mind the food here is worthy of a star. If for some unfathomable reason Michelin do fail to put aside their Manchester-hatred though, I really do fear for the future of Enxaneta; surely a food concept of this level doesn't make financial sense if you're only serving it to four covers per night.

None really, but it's a fairly smart place, I'd stick with a shirt and shoes for dinner.

Unquestionably this was a meal worthy of a Michelin star in my opinion; I'd say some parts of the meal were touching two star level. I'd expect to see strong entries in the other guides also.
Group size: 2 adults. Total bill (including service): £415
View full restaurant details for Enxaneta at Tast Catala
« The Black Bull review
Mana review »