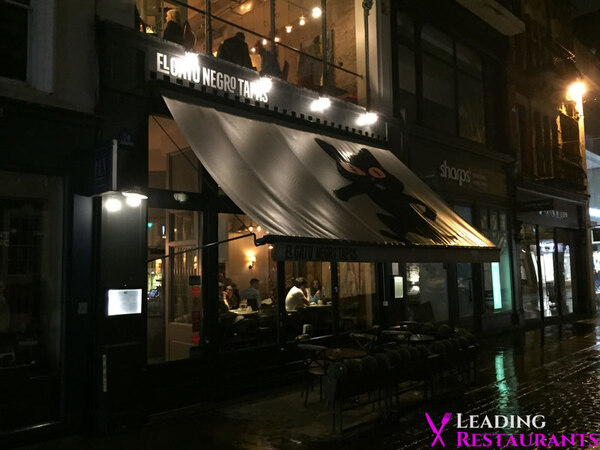 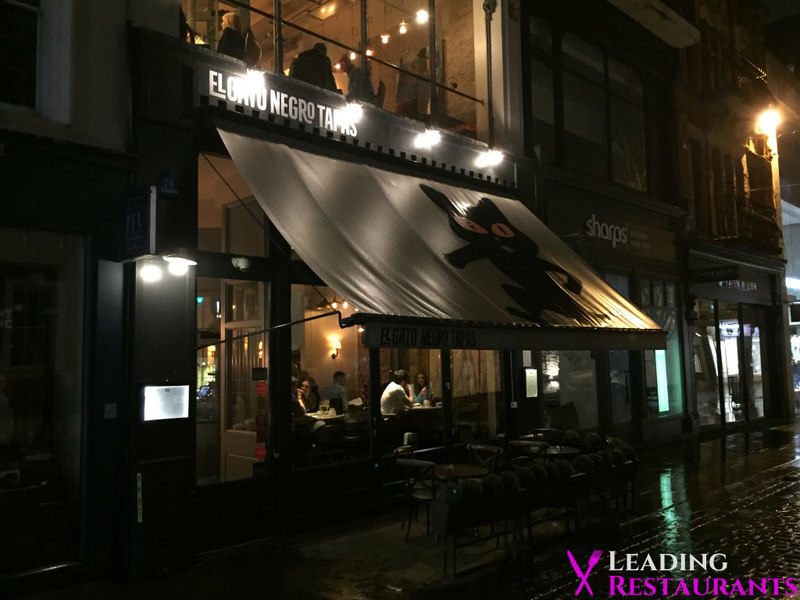 Situated in the heart of Manchester, El Gato Negro is an unashamedly-Spanish tapas restaurant with an undoubtedly trendy vibe. Proudly holding a Bib Gourmand from our favourite tyre munching inspectors, I was reasonably expectant of a decent meal as I visited with a friend for dinner on a Friday evening in March.

The venue itself is pleasant enough; certainly more along the lines of a pseudo-chic bar than a quiet fine dining restaurant, but there's clearly a market for that kind of venue in a city like Manchester and the place was suitably busy when we arrived. We were slightly early for our reservation so were shown to the bar area to acquaint ourselves with a pretty extensive drinks menu. It was however a full twenty-five minutes after our reservation time that we were eventually shown to our table; not a particularly auspicious start.

We were seated by the front window on the second floor, a decent spot I would say. Our waiter for the evening was a pleasant enough fellow although he didn't look especially pleased to be there. Complimentary water is a nice touch (including sparkling if you so desire) but of course, we were there for the food. The recommendation from the waiter was two or three courses each; we opted for six between us.

As you'd expect with a tapas venue, the food comes as and when it's ready; fine in principle but while our first four courses arrived quickly, there was a long, long wait for the final two. But what of the food? Well, I have to say it was fairly uncomplicated but in general, very tasty. The special of the day beetroot salad (which our waiter wasn't exactly trying hard to sell, he almost forgot to tell us) was a nice start and further dishes of scotch eggs and lamb skewers were simple but delicious.

Sadly, our Cornish mussels were slightly under (albeit perfectly edible) and the pig cheeks a bit disappointing, however the octopus was another thoroughly enjoyable dish. We opted for dessert where I was served an enjoyable but dare I say tapas sized chocolate tart. Nice though it was, dessert really highlighted the key issue with this place which for me is a real lack of value. Eight pounds for a slither of tart is obscene; of course I've paid (much) more for desserts in the past, but this tiny albeit beautifully formed slice of tart felt like it was sat on my plate, poised and ready to jump up and spray paint 'mug' on my forehead at any given time. Luckily it was gone and subject to death by drowning in my stomach acids in a couple of mouthfuls.

Look, I get this is a premium city centre location and I would never begrudge an independent restaurant charging what they think they can get away with. As we all know, so many good restaurants go under due to an inability to meet costs so why not charge as much as your guests will stomach? The trouble is, as nice as the evening was, I don't think I'd pay those prices again. But hey, I'm sure plenty of other trendsetters will continue to do so, so good luck to them.

None I could see although it's quite a trendy venue (complete with a large gentleman guarding the door) so probably a good idea to not turn up looking too casual.

Free water and an impressive drinks list. Give dessert a miss.

I don't really have a problem with the Bib Gourmand and you can make a case for a two from the Good Food Guide also. Not sure it's the kind of place the AA would give a rosette to though in my experience, but that might change in future.
Group size: 2 adults. Total bill (including service): £128.
View full restaurant details for El Gato Negro
« The Merchant's Yard review
The Samuel Fox Country Inn review »