Chez Roux at the Cromlix Hotel 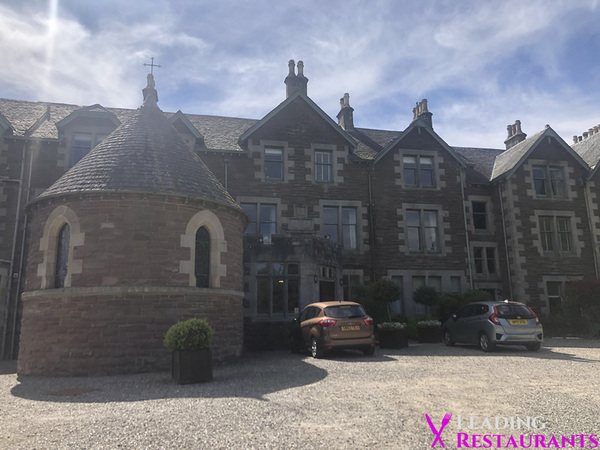 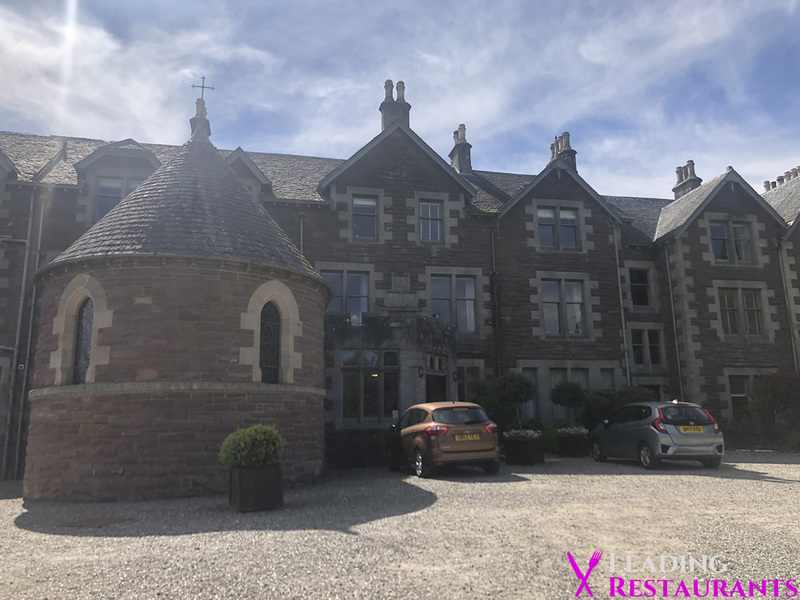 Sitting in thirty-four acres of Scottish countryside near the town of Dunblane, Cromlix is a luxury hotel, owned since 2014 by famed tennis player Andy Murray. Like many luxury venues, the hotel also houses a well regarded restaurant Chez Roux, overseen previously (according to the website anyway) by the late Albert Roux, and now by his son, celebrity chef Michel Roux Jr. With a string of hospitality awards and strong listings in the major restaurant guides, I was fully expectant of a top class meal as I made the visit for lunch on a beautiful June Sunday, with my wife, her parents, and our two young children.

As you'd expect at a place like this, entrance to the estate is past a gatehouse building and then a pleasant drive up a long sweeping road. The road isn't wide but handily they operate a one-way system; very wise. On arrival, the hotel is certainly an impressive building and there's a decent sized car park adjacent to the hotel.

The welcome on arrival was friendly and professional and we were shown to the lounge area to peruse the menus. The lounge was a very nice and comfortable space, the same couldn't be said of the pre-dinner nibbles unfortunately which bizarrely included some straight-out-of-the-packet tortilla chips; I actually saw a chef opening packets when we went through to the dining room later. On offer at lunch is a full carte menu (albeit with a not huge three options per course), a lounge menu (a sort of soups and sandwiches type offering) and there's also a three course children's menu too, which always a bonus when eating with young children.

The wine and drinks list is comprehensive as you'd expect I suppose for a place like this, there were also a few non-alcoholic options which was good to see. The mark up on wine however was pretty steep (again as expected); we enjoyed a good bottle of Paulinshof Riesling with our meal at £75 for a wine that retails for around £22.

After making our menu selections and trying some of the not-particularly-enjoyable pre dinner nibbles, we were shown through to the main dining room. Where the lounge had a luxury feel, the dining room really didn't, it felt more like a cafe in a conservatory, albeit with an open kitchen and comfortable seating. It was all a bit unexpected to be honest. Although it was a sunny day on our visit, the temperature outside was fairly mild fortunately but our waiter did remark on hotter days it becomes quite uncomfortable, which I can imagine is absolutely the case. That said, there is some outdoor seating too so there's always that option I suppose.

Some bread arrived shortly before our starters which was pleasant enough, but lunch proper began for me with the Scottish oak smoked salmon raviolo, served with creme fraiche and a bois boudran sauce. To call it a raviolo was a bit of a stretch, as basically the slices of salmon were just layered over the filling, but nonetheless it was a delicious fresh starter that I very much enjoyed; my father-in-law was very impressed with this dish also. My wife opted for the broccoli and watercress veloute which was tasty also, whilst my mother-in-law had suitably high praise for a dish of Isle of Wight tomatoes with labneh and a pepper and walnut puree. There may only have been three starters on the menu, but it's fair to say they were all very tasty. For the kids, my daughter enjoyed her sweetcorn soup of the day and my young son (as always) was very happy with just a portion of chips, which he described as "the best chips ever".

The question then became, would the mains live up to the starters? In short, they absolutely did. I opted for the miso glazed duck, served with pommes fondant, pea and wild garlic puree, and spiced carrot. It was genuinely one of the best duck main courses I've ever eaten, absolutely delicious with every element executed beautifully. If I was served that plate at a Michelin one star restaurant, I wouldn't bat an eyelid. My father-in-law wasn't quite as impressed with his monkfish served on a saffron risotto, although it was still a very decent plate of food. Likewise, the pea and mint ravioli that my wife and mother-in-law opted for was very tasty but not quite on the same level as my duck. My daughter however was perfectly happy with her beef burger and chips from the children's menu.

Having enjoyed two excellent courses, there was little chance of me leaving without dessert, but sadly this wasn't near the same level as the food that had gone before. My chocolate and peanut butter parfait, served with fresh raspberries, looked nice on the plate but the technical execution of the parfait was poor and the flavour was pretty disappointing too. My wife thought the same, although my father-in-law was a bit happier with his creme fraiche mousse served with strawberries. With one of the three desserts on the carte menu being cheese, that was pretty much it as far as the dessert choices sadly. My young son was happy enough with his ice cream though.

And so, a decent lunch came to an end. Overall this is an impressive venue and service throughout was generally good too. I suspected Michel Roux Jr's influence to be pretty minimal (despite the restaurant name) before I arrived, and that's probably the case, but I've got to be honest and say the starters and mains were of a much higher standard than I anticipated, despite the awards the restaurant holds. It is (as you'd expect for a luxury hotel) fairly expensive, so not sure I'd rush back if in the area, but as far as high end child friendly restaurants go, you could do a lot worse than visit here for a meal.

None officially I don't think, but I'd wear a shirt for dinner.

I think all the guides have this right; the food would need to move up a level to achieve a Michelin star (particularly the desserts) but there was enough good cooking here to warrant the three rosettes.
Group size: 4 adults & 2 children. Total bill: £342.
View full restaurant details for Chez Roux at the Cromlix Hotel
« Barley Bree Restaurant with Rooms review
Restaurant Andrew Fairlie at Gleneagles review »