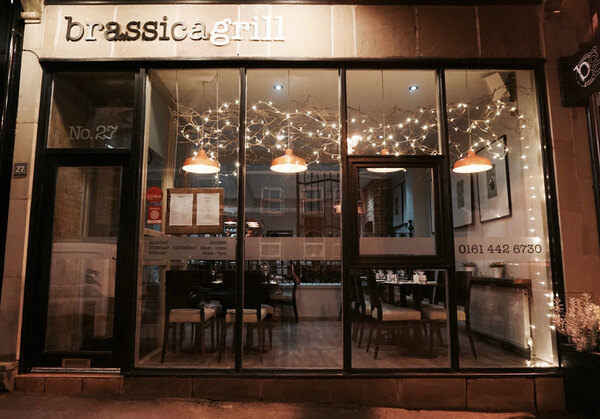 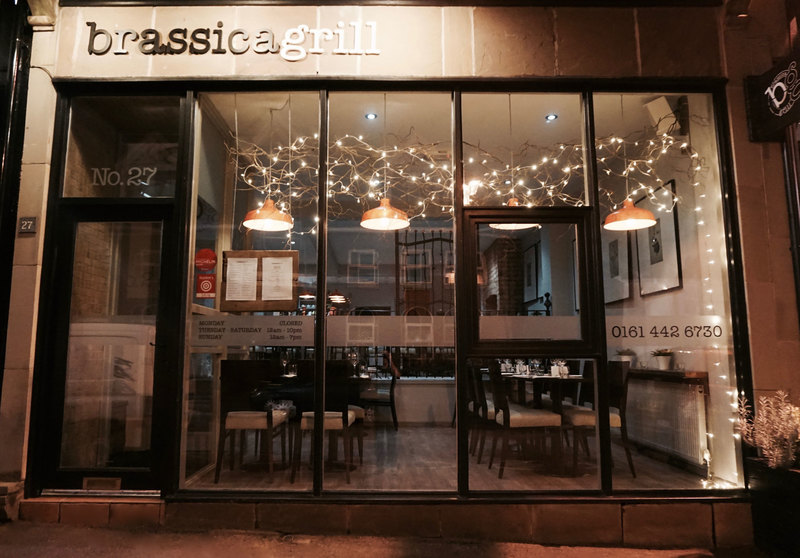 The Parrs Wood Entertainment Centre in Greater Manchester (for those who aren't familiar) houses a number of popular chain restaurants; after a Saturday morning trip to the contained bowling alley with my wife, young daughter and baby son, we could have ventured to Pizza Hut, Frankie & Benny's, Nando's, Chiquito or even Bella Italia without even leaving the car park, what a choice!

Now look, I've nothing against chain restaurants in essence (quite partial to a Pizza Hut actually) but if I can support a local restaurant and also experience better food at the same time, then that seems like a pretty win-win situation in my book. So with that in mind, we took a ten minute trip up the road to Brassica Grill in Heaton Moor for lunch, a "modern British" restaurant and sometime holder of a Bib Gourmand from our favourite tyre munching inspectors.

The restaurant doesn't have a car park and although there is on street parking directly outside, it's pretty limited. This isn't a problem though as with it being mainly a residential area, there's plenty of relatively quiet streets within a five-minute walk. We arrived on time for our reservation; the welcome on arrival was perfectly fine but they'd not put out the highchair I'd requested when booking in advance which I always find a little bit lax. That said, one did appear shortly afterwards so no harm done.

The dining room is a decent space, perhaps a tiny bit tired in places but still projecting a decent neighbourhood bistro feel. And we got a good view of the decor as the restaurant was completely dead for lunch; we were the only table in for the entire service. It's not something I personally mind (especially when you have a slightly grumpy baby in tow) but it does pain me a little to see a restaurant so empty for Saturday lunch in the height of summer.

The drinks list is fairly concise; no Hendricks available but I did enjoy a Da Mihle seaweed gin and tonic. The wine list is longer with a decent selection, albeit nothing too exotic or extravagant. I had a glass of the Wanderlust Sauvignon Blanc later in the meal with my fish main course (one of three whites available by the glass) and didn't find it great to be honest, the fact is was barely chilled probably didn't help, but such is life.

In terms of the food, there's a fixed price menu but the carte is also available at lunch and my wife and I ate from that. There's also a pretty limited children's menu, but at least there is one and it does have three courses (just about) so I suppose I should be grateful for that. Whilst ordering my daughters main course, I did experience the thrill of being asked something I've never been asked before; having selected the mini burger and chips, the question came back "how would you like that cooked?". I mean, it's a kids burger, somewhere between "not raw" and "not cremated" is really where you should be aiming, it's not rocket science.

First up for me was the scotch egg. It was an OK little dish I thought; there wasn't a great deal of meat around the egg itself but overall as a plate of food, it was fine. My daughter had the same (neither starter on the children's menu sounded particularly appealing) and my wife had the crab on toast which tasted OK without being particularly memorable, fair to say we expected more from that particular dish for the £10 price point.

Next up for my main was the halibut and cockles. The fish cooking was OK (maybe slightly over if I was being extra pernickety) but the main thing that let this dish down was a really poor white sauce; far too watery and lacking any kind of depth of flavour. My wife was equally unimpressed with her sweet potato gnocchi although my daughter's aforementioned burger was tasty enough (and the cooking of it absolutely fine).

Last up for me was the white chocolate cheesecake. It was, in truth, a pretty poor dessert. The cheesecake was over-gelatinous and the flavour disappointing. My wife's Eton mess was equally bad and lacked any kind of care or inspiration. At least my daughter's single scoop of vanilla ice cream was difficult to fault although as the only dessert option on the children's menu, it's a good job she likes ice cream.

And so, a pretty disappointing meal came to an end. The service on the whole was fine but the food, although edible, was way below the standard I'd been expecting and not worthy in any way of the prices being charged. It might sound harsh but being completely honest and with the joyous benefit of hindsight, I really wish we'd gone to Pizza Hut instead.

None that I could see.

The Michelin Bib Gourmand is a funny award really; there are less holders of one in the UK than there are Michelin star holders. But surely it has to represent good food in some capacity and that's not what I received unfortunately. There's nothing here to interest the other guides either.
Group size: 2 adults & 2 children. Total bill (including service): £99.
View full restaurant details for Brassica Grill
« Farndon Boathouse review
The Pipe and Glass Inn review »