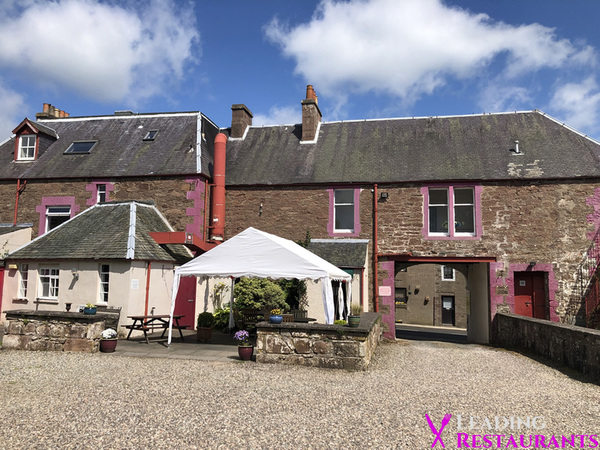 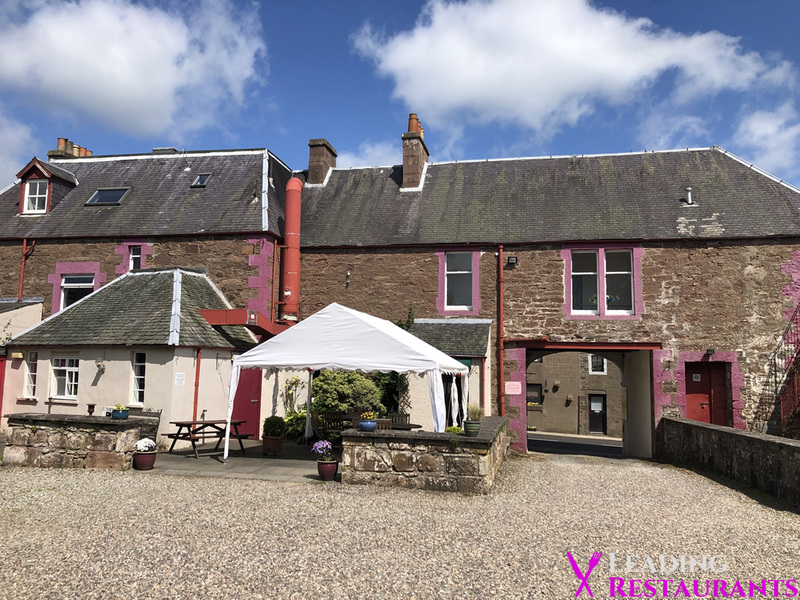 Situated in Muthill near the small market town of Crieff, Barley Bree is a well established restaurant, owned and run since 2007 by French-born chef Fabrice Bouteloup, and his wife Alison. Although the restaurant has held many awards in the past, it does seem to have fallen out of favour a little with the guides in recent years, having been removed from the AA guide in 2016 and then the Michelin guide in 2019. Nonetheless, with very positive reviews from the general public still flooding in, I was very much looking forward to a high quality meal as I rocked up on a sunny June Friday for lunch, with my wife, her parents and our two young children.

The restaurant is well signposted and via a large archway off the main road (plenty big enough to get our nine seater mini van through) we found ourselves in the surprisingly ample car park. Inside we were warmly greeted and shown to our table in the main dining area. I liked the feel of the room; there's a lot of exposed stone and beams and although it's not a super smart modern clean finish as so many places are nowadays (I like those places too), it's a perfectly pleasant space to enjoy a quality meal. There weren't many tables in when we arrived (I think it was just us), but it did fill up with a few more guests as the afternoon went on.

On offer at lunch is a full three course carte menu; there's not a huge amount of choice per course, although the lady serving us said they'd not had their fish delivery that day which would explain part of it. There's also a short (but much appreciated) children's menu too. Drinks wise, there's a thoughtfully considered wine and drinks list; I (and my father-in-law) stuck with our usual Hendrick's and tonics which were fine, and my wife and kids were perfectly happy with their lemonade and apple juices respectively.

There's no free bread here, but we had a portion of the home made sourdough with our starters that was well made and very pleasant as bread goes. Lunch for me began with the beetroot cured sea trout, served with horseradish mayo, croutons, radish and cucumber. It was a pretty faultless starter to be honest; a well put together and delicious plate of food. My father-in-law had the same dish and was very impressed, whilst my mother-in-law said her tomato and courgette soup was suitably tasty also. My wife opted for the ham hough and grain mustard terrine (served with apple chutney and salad) which she reported was very flavoursome too. There may have only been three starters on the menu, but in summary, they were all very nice.

For the kids, my daughter was suitably happy with her breaded fish and chips and my son just had a portion of chips which he devoured with glee, both of which were delivered with our starters were no issue. For mains, I had the rib eye steak not-on-the-menu special, served with chips. The meat was nicely cooked, it would have benefited from some better accompaniments but it was a perfectly tasty plate of food. Other mains around the table included the nut roast, lamb cutlet and ox cheek ballotine and the feedback for all the mains was pretty positive.

Of course, after two enjoyable savoury courses, there was little chance of us leaving without dessert. I had the tarte tatin, a signature of the restaurant, and it was a lovely little dessert. My wife had the honey cake which wasn't quite so good; the cake itself was a little bit overly dense and dry, but the accompanying strawberries and cream were perfectly nice. For my father-in-law and the kids, there was a good selection of different ice creams and sorbets. To finish, my wife and I had a perfectly drinkable cappuccino which was served with a little chunk of home made rocky road style chocolate each. It would have been a nice touch if they'd given us more pieces for the rest of the table (even though my in-laws and of course the kids didn't take coffee) but alas, you can't have everything.

And so, a very enjoyable lunch came to an end. Overall we were very impressed with our lunch at Barley Bree; the service was good throughout and the food was probably the best in terms of value versus quality (the menu is very fairly priced) that we experienced during our holiday in Scotland. I honestly don't know why the restaurant has fallen out of favour with the guides, but I would happily visit again in future and would be fully confident of receiving a high quality meal.

None, but I probably would make a little bit of an effort for dinner.

For me, the food served here is more than worthy of a strong mention in all the major restaurant guides.
Group size: 4 adults & 2 children. Total bill: £153.
View full restaurant details for Barley Bree Restaurant with Rooms
« Sugar Boat review
Chez Roux at the Cromlix Hotel review »