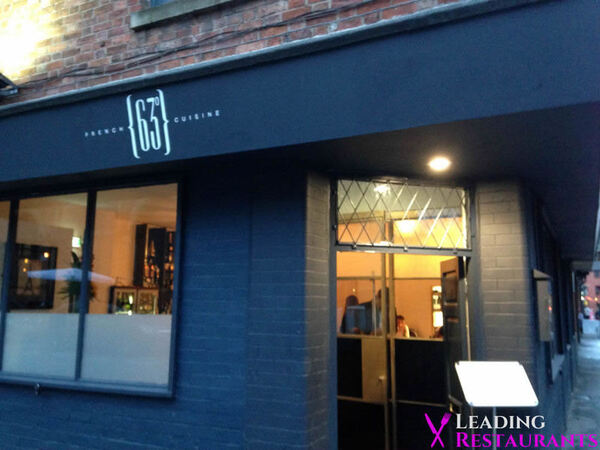 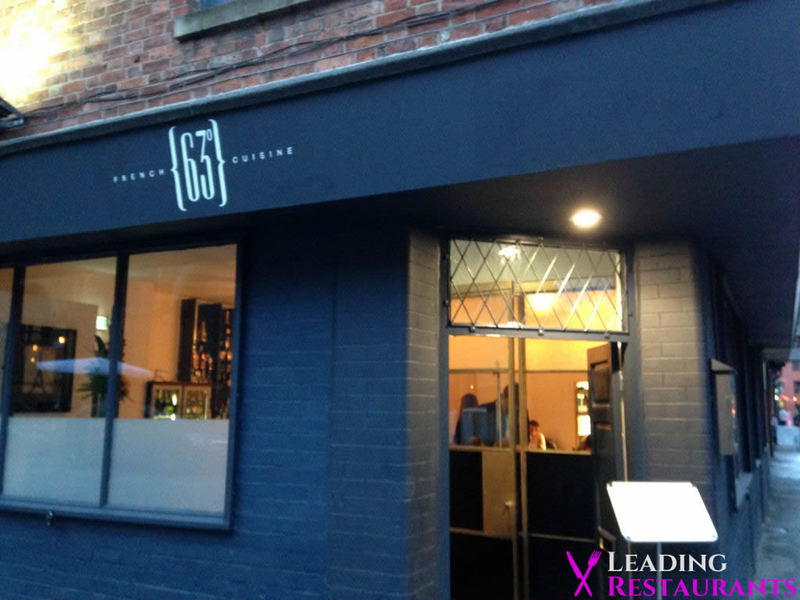 Having recently moved to a larger venue in Manchester's trendy Northern Quarter, 63 Degrees is a French restaurant the Mancunian's seem to love. Positive reviews from the local press and Tripadvisor users are regular occurrences, yet the major UK restaurant guides seem less impressed. So who's right? I was looking forward to finding out as I visited for dinner with three friends on a Friday evening.

We were warmly greeted on arrival as we entered the recently opened restaurant space, but there was surprisingly no offer whatsoever to take coats. Next we were shown to a table for four stuffed in the corner of the restaurant between two walls and a pillar; it was ridiculous really to expect four fully grown men to fit in such a confined space, but we did eventually squeeze in. Perhaps taking our coats would have freed up some much needed space? I guess we'll never know. Service throughout the night although not terrible, was clunky at best, for example forgetting what was unavailable on the menu that day.

There's a decent cocktail list available in terms of length at least; I had a 'La Petite Anglaise' to start, a mediocre offering in all honesty. The wine list is OK and there's a reasonable selection of beers too. However we were, of course, mainly there for the food and with the eye-wateringly high menu prices on show, I was sure a stunning quintessentially French feast would follow. Unfortunately, I could not have been further from the truth as what I was served was, to be blunt, three courses of uninspired dross. It wasn't just a case of poorly constructed dishes, the food served showed a worrying lack of basic cooking ability.

Dinner began with an amuse bouche of basically little sandwich cubes. My wife makes me tastier sandwiches every work day. Safe to say my bouche was not amused. Next up came my starter, a salmon millefeuille, apparently a signature dish of the restaurant. It was edible and not a terrible dish but fundamentally nothing at all special. It was however, a considerably better dish than my main course which followed; Rack of lamb. It came in two pieces; one was barely cooked, one was absolutely raw. It was not pleasant and it actually made me quite angry that a kitchen can send a dish lacking any basic cooking ability and yet still charge £26 for it. That was £26 for raw lamb and a tiny bit of green on a stick by the way, don't expect a meaningful complete dish for that money, sides (which you'll need if you're unfortunate enough to eat here) are extra.

Could dessert be any worse? Well on the plus side, there was little risk of my chocolate sphere being served raw. However, as the hot raspberry sauce melted the very boring looking chocolate ball, what awaited me inside? Something glorious and delicious? No. Four raspberries. £7.50 and inside a chocolate ball they'd served me four raspberries. This was quite possibly one of the most unimaginative desserts I'd ever been served in a fine dining restaurant. It just smacks of incredible arrogance to even contemplate serving a dish so devoid of invention at such a ludicrous price point.

By this point I was angry. Really angry. So that seemed a good time to leave. If you've never been to a good fine dining restaurant, you may well somehow enjoy 63 Degrees, after all they are able to take food, lightly warm it and put it on a plate. If however, you have any remote concept whatsoever of what good food is, you'll hate this place as much as I did.

None. A mix of fairly casual and some guys with open shirts during my visit.

The AA Guide and Good Food Guide have this absolutely right; the standard of food here is not worthy of a mention in either. As for the Michelin guide, I can only assume they feel some sort of obligation due to the restaurant being French, but I struggle to believe a competent tyre munching inspector has eaten here often (if at all).
Group size: 4 adults. Total bill: £196.
View full restaurant details for 63 Degrees
« World Service review
Scottish Steakhouse at the Macdonald Manchester Hotel review »